Insect eggs can take any shape at almost any size, refuting explanations for their dimensions based on geometric scaling laws or on relationships between egg traits and adult traits.

ABOVE: Milkweed bugs, Oncopeltus fasciatus, lay eggs that start as yellow and turn orange as the embryo develops inside. In the oldest eggs, the folded legs and two small red eyes of the soon-to-be hatchling can be seen peeking through the egg shell.
IMAGE BY SAMUEL CHURCH AND BRUNO DE MEDEIROS

The famed evolutionary biologist Leigh Van Valen once said that “evolution is the control of development by ecology.” Nowhere is that clearer than in a new database of measurements of more than 10,000 insect eggs of diverse sizes and shapes created by a team of researchers at Harvard University. In a study of the collection published today (July 3) in Nature, the researchers report that the habitat of where the eggs are laid—not geometric scaling laws that determine animals’ proportions or other life history traits—explains the diversity of egg size and shape across insects.

The evolution of organismal size and shape is a problem that biological scientists have been studying for centuries, and one that attracted the efforts of some of the most prominent biologists of the 20th century, such as Julian Huxley and Steven J. Gould. D’Arcy Thompson’s classic book On Growth and Form, published in 1917, investigated the question of whether there are certain shapes that can only exist if they are a certain size, notes evolutionary developmental biologist Cassandra Extavour, the senior author of the new study. For instance, elephant limbs have to be proportionally much thicker than those of a gazelle because mass increases with the cube of linear measurements (what’s known as a geometric scaling law). Thus, a spindly-limbed gazelle whose mass was scaled up to that of an elephant would break its legs.

Along the same lines of geometric reasoning, one might hypothesize that eggs with larger volumes would have longer shapes to maximize the surface area needed for oxygen exchange.

Another common explanation for egg size and shape evolution lies in the relationship between the egg and life history traits such as developmental rate and final adult size, Extavour explains. For instance, a generally accepted but unproven idea is that larger adult insects produce larger eggs, and larger eggs are associated with larger adult sizes.

Extavour's graduate students, Sam Church and Seth Donoughe, became interested in compiling information about insect egg sizes and shapes because they were studying the very beginning of development in the cricket, and they wondered how this compared to insects of various sizes.

“You can be quite confident that whatever problem occurs to you that you think is really interesting, someone else in the history of science has thought this was interesting as well. And in order to not repeat work that’s been done in the past, and to improve your work by learning from what’s already been done, you should always make sure you’re grounded in the work that’s come before yours,” Extavour says.

So Church and Donoughe started searching for insect egg data in the scientific literature. The only problem: the information described literally millions of species and was scattered across thousands of papers, which would take years to search and read. To get around this logistical problem, the researchers wrote a computer algorithm to search digital papers and flag the pages that were likely to contain information about insect egg size and shape, for example, if it contained the words “egg” or “ovary” and the word “length.” Once the computer flagged the relevant pages, the researchers manually entered the relevant information into their database. They enlisted the help of Mary Sears, the librarian at the Ernst Mayr Library at the Museum of Comparative Zoology at Harvard, to find and digitize old papers to make them computer-searchable.

The result: a database of more than 10,000 insect egg measurements from 6,706 species, with egg sizes ranging over almost eight orders of magnitude, from the tiniest parasitoid wasp Platygaster vernalis’s egg, just 7 x 10-7 mm3 in volume, to the 500 mm3 egg of the earth-boring beetle, Bolboleaus hiaticollis. For comparison, if the smallest egg was the size of a golf ball, then the largest one would be the volume of an Olympic-size swimming pool, says Art Woods, an ecological and evolutionary physiologist at the University of Montana. 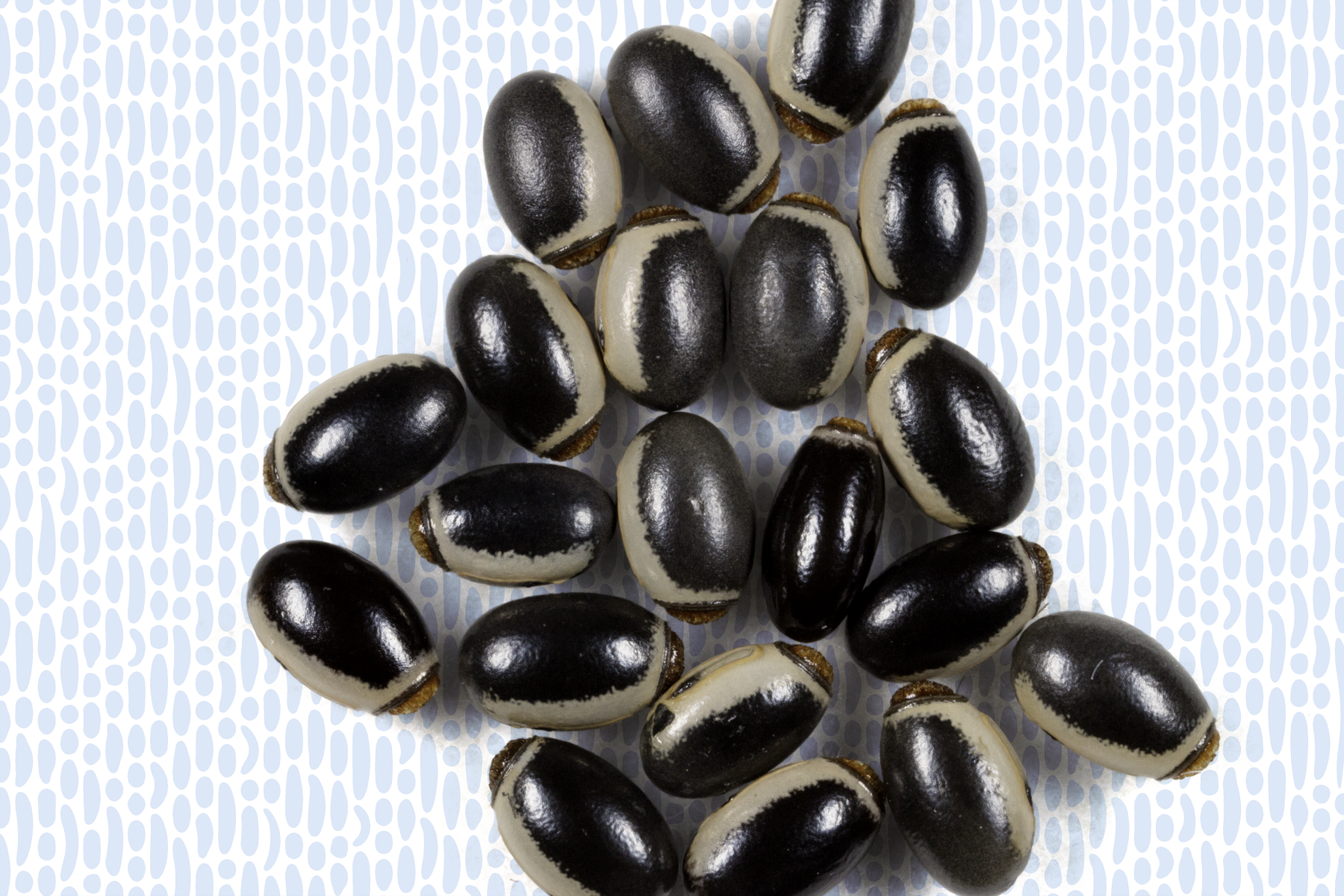 These seed-like eggs are laid by the northern walkingstick, Diapheromera femorata, and are dispersed by ants. The background is an array of egg shape silhouettes reconstructed from drawings in the entomological literature.
Eggs were imaged by Sofia Prado-Irwin, Bruno de Medeiros, and Samuel Church at the The Caterpillar Lab in Keane, NH; and depicted with egg silhouettes by Seth Donoughe.

But none of these ideas held up to scrutiny.

“We found we can have pretty much any shape at almost any size and there’s no consistent trend to the evolution of egg size and shape in insects,” Extavour says.

The result was counterintuitive, based on the allometric thinking that pervades studies of the evolution of shape and size. “I think a lot of people that work on metabolism and physiology have this sort of underlying idea that there are very simple rules, and that if you look at broad enough scales of data, those simple rules will become manifest as really big patterns that show up,” says Woods. Here, the researchers show that, in general, bigger insects have bigger eggs, but there’s still three or four orders of magnitude of size difference among eggs from insects of a given size, which means that the link between egg size and adult size just isn’t very tight, Woods explains.

The researchers then looked at two egg-laying environments that have evolved independently many different times: endoparasitism (insects laying eggs inside other insects) and aquatic egg laying. They found that endoparasitic insects produce small eggs in the shape of tear drops, while the eggs of insects that lay eggs in water are small and tend to have rounder shapes. The ecology of the egg appeared to play a predominant role in influencing egg size and shape.

“The eggs reflect the local ecological conditions that the eggs themselves are living in, much more than anything about the other life stages,” Woods says. 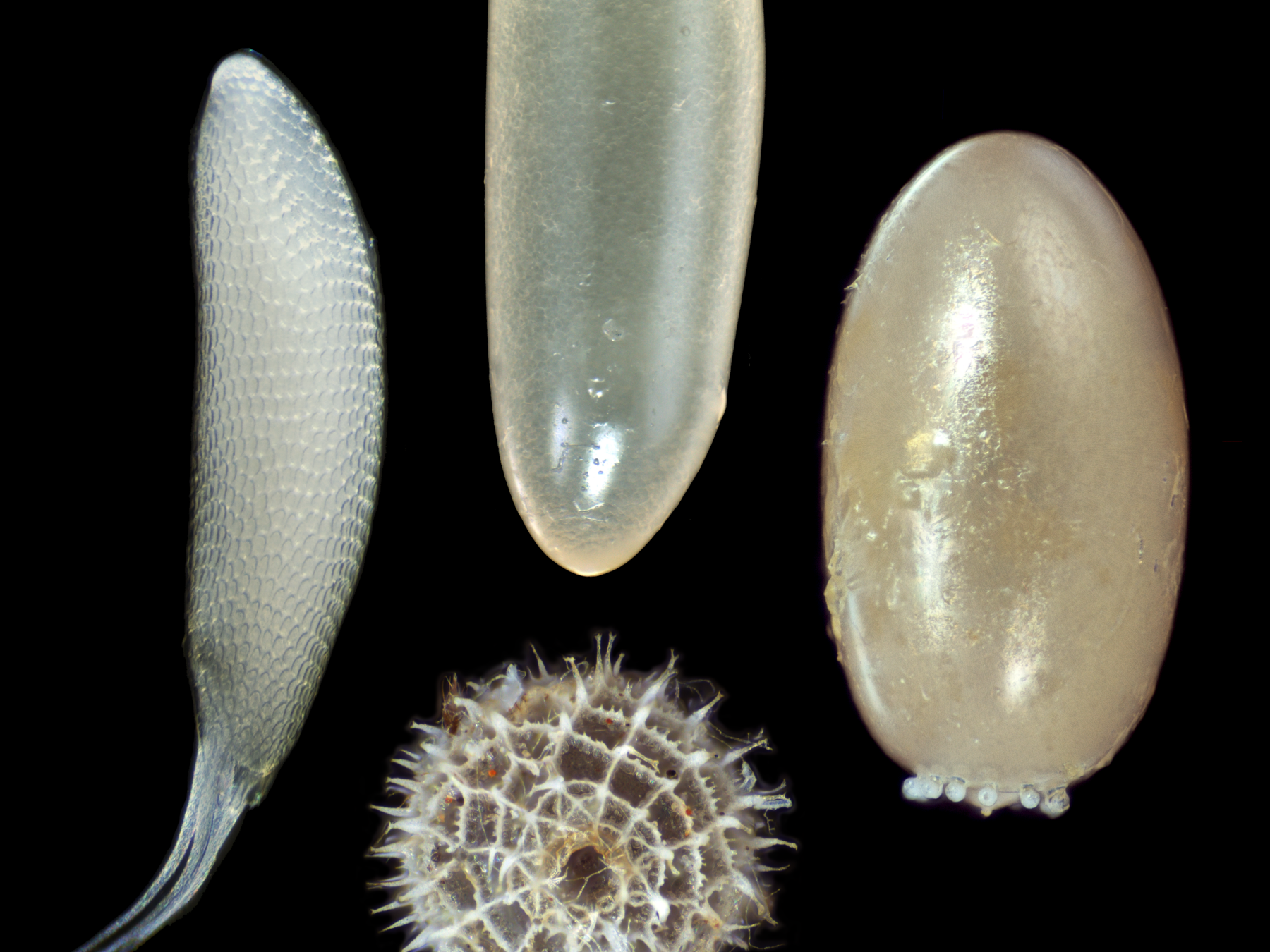 Eggs come in all shapes and sizes, as shown by this array of four insect eggs: a Hawaiian fly, Drosophila mimica (left); a two-spotted cricket, Gryllus bimaculatus (top); a milkweed bug, Oncopeltus fasciatus (right); and an imperial hairstreak butterfly, Jamelnus evagoras (bottom). Eggs differ not only in shape but in the ornamentation of the egg shell—polygonal in the fly, rough in the butterfly, smooth in the cricket, and having a small anterior crown in the milkweed bug.
Images by Samuel Church and Seth Donoughe

Thus, earlier ideas explaining egg size and shape based on their correlations to traits like developmental time and adult size appear to be incorrect. Big adults don’t always come from big eggs; nor does egg size correlate with development time. Insects have life cycles with four life stages (egg, larva, pupa, adult), each with its own ecology, and each is subject to different selective pressures, Woods explains. “Their data support the idea that the stages may be less connected to one another than we thought, and that shows up in the data as the evolution of the egg stage in relation to its own proximate environments rather than in relation to other stuff happening in other parts of the life cycle. That’s just super cool,” Woods says.

Woods adds that perhaps future studies could identify additional axes of ecological variation that matter. For instance, it may be possible to find patterns of size and shape for insects that lay eggs on leaf surfaces, dirt, or inside rotting fruit—all of which would present different challenges for survival, such as oxygen availability and desiccation.

One of the key things Extavour says was critical in their analysis was to take the phylogenetic relationships of the insects into account using sophisticated statistical methods, because otherwise one could be led to incorrect conclusions. For instance, many beetles tend to have round eggs, so similarities between beetle species are explained by their evolutionary relatedness, not ecology. Only because the researchers chose features such as endoparasitism and aquatic egg laying, which have evolved independently many times, and because they had complete information about the insect evolutionary tree that allowed them to control for the relatedness, were they able to find the pattern that the egg’s environment predicted its size and shape.

“I think that in instances where similar shapes or sizes have evolved independently of each other—whatever the feature is that one is studying—phylogenetic correction is going to be key,” she says. “Universal scaling constraints across animal structures is not a helpful framework for understanding egg size and shape, but we can uncover a helpful universal framework if we take those things into account.”