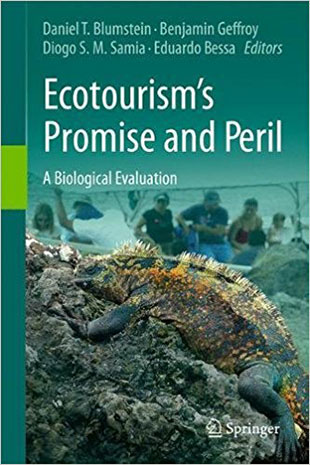 SPRINGER, AUGUST 2017This summer while you’re enjoying your favorite natural setting—snorkeling, hiking, bird-watching, or exploring tide pools—pause and ponder the cumulative impact of what you’re doing. Nature-based tourism is huge. A recent study suggested that there are more than 8 billion visitors per year to terrestrial protected areas the world over. Stated bluntly, there are more visits to natural areas than there are people on the Earth! This estimate does not incorporate data from small reserves, so the real extent of people interacting with wildlife and visiting natural areas is even larger. Such high numbers cannot occur without creating ecological impacts.

In Ecotourism’s Promise and Peril: A Biological Evaluation, we and our contributors systematically review the evidence for biological impacts that result from nature-based tourism. Focusing on tourism involving fish, marine mammals, terrestrial animals, and penguins, we describe how interacting with even well-intentioned humans may physiologically...

Ecological impacts must be viewed in the context of evaluating the cumulative effects of the pollution of Earth, humanity’s insatiable demand for natural resources, climate change, and a wide variety of other types of damage humans wreak. From this perspective, even relatively small impacts from nature tourism may have profound consequences and push an animal or plant population toward extinction. We propose a list of best practices to reduce or manage these impacts, and we call for a research-based, adaptive management approach for sustainable coexistence.

Yet, as editors, we largely failed in fulfilling one of the main goals of this book project: to develop an integrative framework to objectively evaluate ecotourism’s costs and benefits. Ecotourism—natural-area tourism driven by concern for environmental conservation, social welfare, and local economic development—is supposed to be “better” than simple nature-based tourism. But such a framework proved elusive.

Trying to optimize these three facets of ecotourism creates inevitable trade-offs. For instance, it’s easy to maximize profits by bringing more people to see sea turtles, dolphins, or penguins. But by doing so, we may ultimately harm the very animals that we aim to protect. It’s possible to figure out ways to minimize some of those impacts on wildlife while still maintaining profits, but a growing ecotourism industry may create stability-threatening tensions in the local human communities.

Although we framed our exercise in the context of providing guidelines to negotiate these trade-offs, we realize that we failed. Why? Because there is no agreed-upon common currency with which to evaluate these trade-offs. What is the value of an intact bat community? For that matter, what is the value of a traditional culture? Without a common currency we can’t properly assess costs and benefits.

One possible framework for evaluating costs and benefits focuses on quantifying ecosystem services—the benefits, such as pollination, flood mitigation, and waste decomposition that intact, well-functioning ecosystems provide to people. This has been done successfully with agriculture. Indeed, it was estimated that insect pollinators saved farmers about €150 billion globally in 2005. More recently, crop pollination services provided by wild bees were valued at more than USD$3,250 per hectare per year.

Similarly, the value of an intact insect, bird, or fish community could be estimated. Imagine that a given fish community keeps mosquitos in check, therefore reducing the spread of insect-borne viruses such as Zika and yellow fever to humans, thereby saving on medical expenses, the costs of reduced productivity caused by sickness, and the cost of lost lives. Tourists themselves directly benefit from nature through cultural ecosystems services, such as the spiritual, aesthetic, and cognitive benefits associated with interacting with nature. These sorts of benefits are the principal reason why tourism and recreation were included in the Millennium Ecosystem Assessment. Finally, ecotourism could also provide alternative financial opportunities to local communities, such as merchandise and food sales. Hence, properly assessing the benefits of ecotourism by focusing on ecosystem services may be the common currency that we seek. Clearly, more research must be done in this important area.

Given such a framework, we also suggest that the same biological cost may be acceptable in different contexts. For instance, we assert that regulations should be more rigorous in developed countries where people have options for other forms of employment. But in a less-developed location, where ecotourism may be the only viable nonconsumptive option and tourism provides alternatives to hunting, fishing, or logging (thus preserving biodiversity), a greater degree of biological cost may be socially acceptable.

An important point is to view ecotourism’s impacts somewhat flexibly with respect to their sociocultural context. In places where no human culture exists (e.g., Antarctica) regulations should be strong, biased towards maintaining biodiversity, and rigorously enforced. In the Arctic, it’s a different story, and a much more challenging one. Indigenous Arctic communities are ground zero for climate change, many are under extreme economic stresses, and many face cultural problems that stem from minimally regulated extraction of natural resources. Yet melting ice caps and later freeze-ups also threaten the unique animals that people go to see. Biodiversity monitoring is also essential to ensure that ecotourism is not driving populations of iconic species, such as polar bears, towards extinction.

As biologists, we are now more cognizant of the sociocultural aspects of ecotourism, and we are excited to work with anthropologists, sociologists, geographers, and developmental economists to develop viable paths forward.

Daniel T. Blumstein, Benjamin Geffroy, Diogo S.M. Samia, and Eduardo Bessa are the editors of Ecotourism’s Promise and Peril: A Biological Evaluation (Springer, August 2017). They are all working ecologists. Read an excerpt of the book.