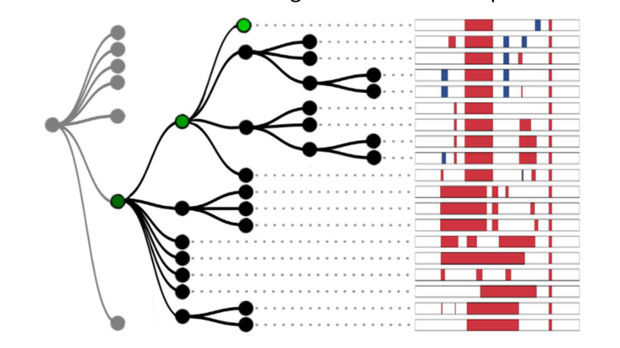 A cellular family treeAARON MCKENNAMutating a specific synthetic DNA element in engineered zebrafish embryos has enabled researchers to irreversibly tag cells and their progeny during development, according to a report published in Science today (May 26). The technique allows the family trees of adult cells to be traced back to their embryonic beginnings.

The authors “have developed a very powerful technique that allows us to lineage trace cell and organ development . . . in the whole organism,” said stem cell biologist Rong Lu of the University of Southern California who was not involved in the work. “I think it will also be very interesting for studying diseases such as cancer and for understanding tissue regeneration,” she said.

Scientists have developed various techniques for tracing cell lineages, Chakravarti continued, “but none of them work very well.” For example, methods in which dyes or reporter genes are used to tag cells and their daughters allow only a limited number of cells to be analyzed. Even sequencing the whole genomes of cells—to identify somatic mutations that reveal how individual cells are related to one another—is not a feasible option at the scale of whole organisms. “You can’t sequence a million genomes from one individual,” said Harvard’s Alex Schier, a coauthor on the new study. “That’s unaffordable.”

Schier and colleagues’ new approach is called genome editing of synthetic target arrays for lineage tracing, or GESTALT. It works by introducing a piece of foreign DNA (the synthetic array) into the genome of a single fertilized cell and, over the course of development, specifically and cumulatively mutating that array—by genome editing—such that early mutations mark many cells and later mutations mark fewer. Restricting mutations to the array means the organism’s normal development is unaffected.

Researchers then sequence the synthetic arrays; the acquired mutations are used to reconstruct a cellular family tree. “It allows you to see, over time, how the cells are related to each other,” Schier told The Scientist.

The team used the approach in a proof-of-concept experiment, Schier said, to trace the lineages of cells in adult zebrafish organs. The researchers found that each adult tissue originated from a small number of founder cells. Indeed, in most organs, fewer than 25 alleles (mutated versions of the array) gave rise to more than 90 percent of the cells. As an extreme example, just five alleles defined more than 98 percent of cells in the blood.

Schier said that he was “surprised that so few cells give rise to so much of an organ,” adding that it is still unclear whether the low numbers reflect a very limited starting population, or if organs begin with more founders which are later eliminated.

Utilization of GESTALT to examine specific periods of development should help resolve such questions, he said.

Aside from classic developmental biology investigations, GESTALT could be used for following cell lineages in tumors as they grow and metastasize, said Schier, or for examining which cells are responsible for regenerating given tissues. If the gene-editing machinery was engineered to depend on specific signals or environmental cues, then GESTALT might even be used as a way to determine which cells in a population are receiving such inputs and what they become, he added.

In short, “this method can be used to unravel any process that involves cell division,” said Chakravarti. “It’s a highly significant piece of work.”

James Briscoe of the Francis Crick Institute in London, who also did not participate in the study, agreed. “It’s one of those papers that, when you read it, you just immediately think of half a dozen or a dozen things you could do with the technique,” he said.