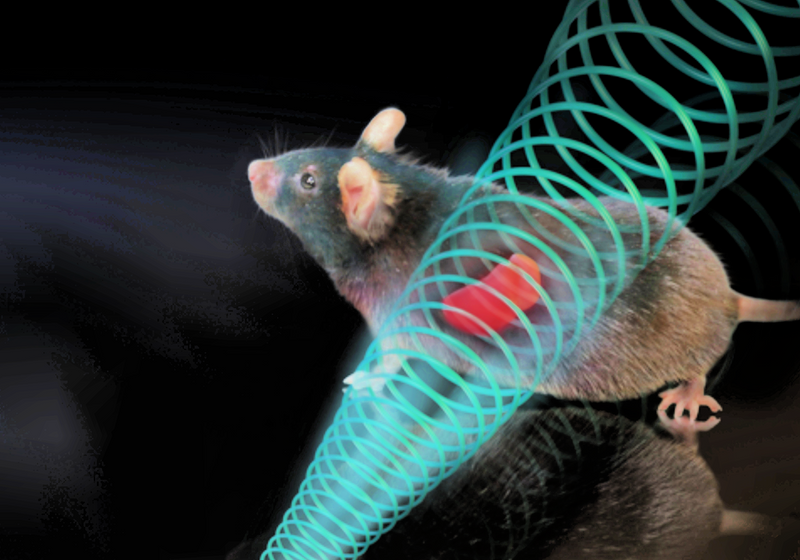 The paper “is a noninvasive way of treating glycemia in animal models with diabetes, so I thought that was pretty remarkable,” says Juleen Zierath, who studies type 2 diabetes at the Karolinska Institute in Sweden and was not involved in the study. “The authors did a really thorough job to convince themselves that what they were looking at was something worth investigating further, that it wasn’t just an artifact.”

Calvin Carter, a postdoc in Val Sheffield’s lab at the University of Iowa, didn’t believe the results at first himself, he says. Carter finished his PhD at the university in 2014 and had about six months before he left Iowa to go to medical school. He decided to use that time to start a “crazy project, just for fun,” to look at how energy fields affect the body. He built several devices that emitted electromagnetic fields—at strengths between 10 and 100 times that of the earth and 1/1000th of that of an MRI—and started testing them on mice for seven or 24 hours per day. The devices generated static electromagnetic fields, while animals moved freely in metal-free cages.

Don’t discount a very unexpected result. Take some time, like these authors did, and try to dig into the details.

A few months before Carter’s planned move, MD/PhD student Sunny Huang joined the Sheffield lab. She was starting a diabetes-related project and needed to practice measuring blood sugar in mice, so Carter donated some of the animals he’d been using, which included models of type 2 diabetes. Huang quickly noticed that the mice who had been exposed to electromagnetic fields had half the blood glucose levels as the unexposed mice, data she showed Carter.

“I’m like, ‘No, get out of here. You did the measurements wrong. The glucometer’s messed up. Let’s try it again,’” Carter says. The pair repeated the measurements, and the blood sugar in treated animals that were supposed to be diabetic was normal.

At that point, Carter and Huang showed the data to Dale Abel, a physician and diabetes researcher at Iowa. “I said, ‘Look, you’ve got to reproduce this two or three different ways to begin to convince me,’” Abel tells The Scientist.

So Carter, Huang, and their colleagues tested electromagnetic field exposure in three different mouse models of diabetes and demonstrated that each had lower blood sugar and were more sensitive to insulin than controls that were exposed to inactive devices. The findings didn’t differ when the animals were treated for seven or 24 hours.

Previous work has shown that cells use electromagnetic fields in migration, which is mediated in part by a molecule called superoxide, a reactive oxygen species that seems to function like a molecular antenna, picking up on electrical and magnetic signals. Patients with type 2 diabetes have been shown to have elevated levels of superoxide, which has been linked to vascular issues and diabetic retinopathy. To investigate how these electromagnetic fields might be exerting their effects, the researchers depleted superoxide molecules from the animals’ livers and found that exposure to the fields didn’t have any effect on blood sugar or insulin resistance.

“We think that that molecule is what’s signaling a lot of the other things that happen in the cell to adapt and then to go on to improve blood sugar,” says Huang.

“It was very intriguing what they found, and potentially very important if you could reverse hepatic insulin resistance with static magnetic electric fields,” says Douglas Rothman, who studies metabolism and metabolic control at Yale University and did not participate in the work. It would be nice, he adds, “to establish in a simpler system—for example, a non-biological system—a measure showing that the impact of the magnetic and the electric fields on superoxide reactivity was significant.”

Many of the protein players remain undefined, and further exploration of how this works will be the subject of future studies, the authors acknowledge in the paper. They also plan to test the technology in larger animals and people. Huang, Carter, and colleagues have started a company, Geminii Health, which will focus on commercialization of the treatment.

“They would really want to do very carefully calibrated studies to be able to show that this could work for people with diabetes, but if there are no deleterious side effects, this could be an interesting way to help manage diabetes,” says Zierath.

The study also shows that “it’s really important to keep your eyes open,” she adds. “Because as a researcher, sometimes you really see something very unexpected. Don’t discount a very unexpected result. Take some time, like these authors did, and try to dig into the details.”