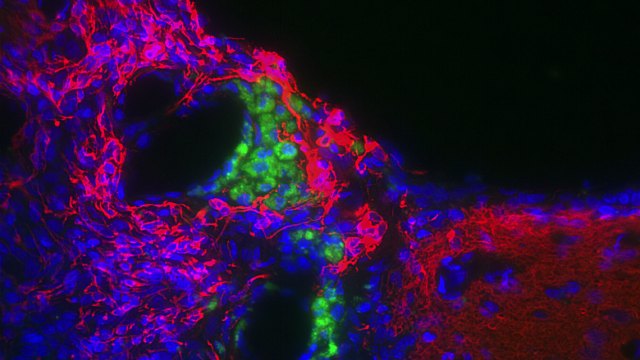 When scientists applied electric current to human neural stem cells injected into rats’ brains, the cells moved toward the animals’ subventricular zone and lateral ventricle, instead of toward their olfactory bulb, the default destination. The result, published June 29 in Stem Cell Reports, suggests that electrical stimulation could one day be used to guide neural stem cells to damaged sites in the brain.

“This is the first study I’ve seen where stimulation is done with electrodes in the brain and has been...

“I didn’t expect the direction of the cells could be reversed,” study coauthor Min Zhao of the University of California, Davis, tells The Scientist. The molecules that direct the flow of cells in the brain are very commanding, he says. Seeing that electrical stimulation can reverse the directions the cells travel shows the technique is “even more powerful than we thought” for guiding neural stem cells.

Researchers are interested in commandeering neural stem cells to lead them to tissue that has been damaged by disease, such as Parkinson’s, or by severe injury, such as from a stroke or impacts, and regenerate healthy cells. Mammalian neural stem cells are stored deep in the brain in the subventricular zone and hippocampus, and need to travel long distances to reach damaged cells in the cortex or elsewhere. Chemical and cellular cues spur neural stem cells to move, but for stem cell therapies researchers need more direct ways to guide the cells, Zhao says.

Researchers have been working with chemical guides to get the cells to move, relying on those already in the brain and ones developed in the lab and administered as drugs. Past studies have also shown that electrical stimulation could coax cells in a dish to move. But making that happen in a living animal appeared to be much more challenging. All nerve cells in the brain can be influenced by electrical stimulation. Zhao and colleagues had to figure out how to get only the injected neural stem cells to respond to that stimulation.

In the new study, the researchers injected human neural stem cells, tagged with the fluorescent marker EGFP, into the middle of the rostral migration stream of rats’ brains. That stream usually guides nascent nerve cells to the olfactory bulb. But when electrodes were implanted in the rats’ brains and current was directed against the regular flow of the rostral migration stream, the injected cells moved in the opposite direction.

After three weeks and again after four months, the cells still seemed to be migrating toward and congregating in the subventricular zone and lateral ventricle. There were signs that some had differentiated into neurons, astrocytes, microglia, or oligodendrocytes, too—a change in cellular identity that suggests the cells could be integrated into the neural network and possibly replace damaged cells.

Evan Snyder of the Sanford Burnham Prebys Medical Discovery Institute says the data are convincing that the cells are responding to electric current. “The work is an interesting proof-of-concept,” he tells The Scientist, “but the challenge will be, how do we use this in a clinical setting?”

Trounson notes that rodent brains and human brains are different, so tests of the technique would need to be done in primates next to see if it works similarly. He and Snyder question whether patients would want electrodes implanted in the brain to drive such movement of cells. Trounson acknowledges that implanting electrodes in the human brain is not an usual practice for treating patients with deep brain stimulation, so the technique is not completely novel. But options for less invasive electrical stimulation would be useful, he says.

Zhao’s team is setting up primate studies and looking into a less invasive application that sends electrical stimulation through the skull. He says using the technique to repair neurodegenerative diseases is a bit in the future, but he believes the result is a big step toward that.