ABOVE: Moranella (M) inside Tremblaya (T) inside cells of the mealybug P. citri, with nucleus indicated with an N
MARK LADINSKY, CALIFORNIA INSTITUTE OF TECHNOLOGY

Mitochondria and plastids are organelles within eukaryotic cells that are thought to have derived from endosymbiotic bacteria and that, throughout evolution, have become entirely dependent on their hosts and vice versa. Many similar interdependent relationships appear to exist between bacteria and hosts—with evidence including  the transfer of bacterial genes to the host genomes, for example—but proof that these genes function in pathways as complex and interconnected as that of, say, mitochondrial and nuclear genes has been formally lacking.

A report in Cell today (October 3) now provides such evidence, at least for one endosymbiont, the bacterium Moranella, and its host, the mealybug Planococcus citri. The study shows that the two work together to coordinate steps in the synthesis of the polymer peptidoglycan.

“It’s a necessary paper because it shows that the inferences that might be made from comparative genomics . . . are actually supported by doing the real biochemistry,” says molecular microbiologist Ford Doolittle of Dalhousie University who was not involved in the research. “It’s not surprising that they find this, but it is very gratifying that they do,” he adds.

Moranella, also known as Candidatus Moranella endobia, actually lives within another bacterial symbiont, Candidatus Tremblaya princeps, or Tremblaya, and together they reside inside specialized cells of the mealybug where they produce essential amino acids not provided by the insect’s diet of plant sap. John McCutcheon of the University of Montana has been working with mealybugs and their matryoshka doll–like living arrangement for the best part of a decade.

Organelles are just very old endosymbionts, that’s how I think about it. What you label them is up to you.

As with many endosymbionts, over the course of evolution, certain genes have been transferred from bacteria to host. In the case of P. citri, some of those acquired genes are involved in the production of a bacterial cell wall polymer called peptidoglycan. The fact that these genes have been lost by the bacteria yet retained by the host suggests they are, for whatever reason, worth keeping and potentially still functional. And, if the genes are indeed operative, it would imply that the pathway in which they function would involve a complicated mosaic of inputs from host and endosymbiont—the sort of complex interactions seen between the classic endosymbiont-turned-organelle example of mitochondrial- and nuclear-encoded genes, says McCutcheon. All the circumstantial evidence suggests this would be the case, but “we wanted to see whether it actually worked,” he says.

Unfortunately, confirming such suspicions is not as technically feasible in mealybugs and their endosymbionts as it might be in genetic model organisms such as the fruit fly. “We can’t knock out a gene using CRISPR or something,” McCutcheon explains, because the tools have not been developed. Moreover, the bacterial endosymbionts are so dependent on their host they cannot be cultured. “It’s a very difficult system,” says Nancy Moran, who studies the biology of symbiosis at the University of Texas and did not participate in the research. “They had to use a lot of imagination to figure out experiments that could be done.”

Among those experiments were mass spectrometry studies to show that peptidoglycan components were present in the mealybug tissue, immunohistochemistry with an antibody to recognize a peptidoglycan-synthesizing enzyme encoded only in the mealybug genome, and a specific labeling of D-alanine—a rare isomer of the amino acid alanine found almost exclusively in bacterial cell walls.

Together, the results revealed that peptidoglycan was indeed formed in the insect cells, that it formed a coat solely around the Moranella, and that one of the key enzymes needed to build the peptidoglycan, despite being coded for in the insect genome, was somehow transported across five cell membranes (three belonging to Tremblaya and two to Moranella) to where it was needed.

“The presence of a gene does not necessarily predict that the gene is being used and that it is part of a complicated pathway,” says parasitologist Julius Lukeš of the Institute of Parasitology in Ceské Budejovice, Czechia, who was not involved in the research, “so showing that is the case is extremely important.”

Given the now-proven complexity of interdependence between P. citri and its endosymbionts, should the latter be described as organelles?

“In my view it is a continuum and the definition matters so little,” says McCutcheon. “Organelles are just very old endosymbionts, that’s how I think about it. What you label them is up to you.” 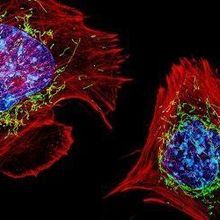