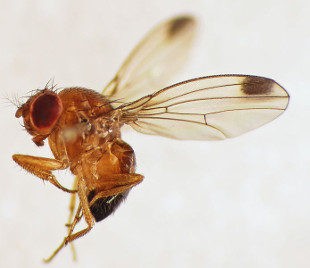 Male Drosophila suzukiiWIKIMEDIA, MARTIN COOPERMost animals inherit mitochondria from their mothers. Now, at team of scientists has shown that, in Drosophila, the paternal contribution of mitochondrial DNA (mtDNA) is degraded in the sperm in a process that depends on a subunit of the fruit fly mitochondrial DNA polymerase called Tamas. Their results were published last week (March 16) in Current Biology.

“What’s striking about this study is that this gene, tamas, encodes a subunit of the mitochondrial DNA polymerase, which is the enzyme responsible for replicating the mtDNA,” said Damian Dowling of Monash University in Melbourne, Australia, who did not participate in the work. “It’s a completely new function for this gene that was not known prior to this study.”

The role for Tamas is “surprising,” said Eli Arama of the Weizmann Institute of Science in Rehovot, Israel, who was not involved in the study. “Instead of...

Scientists at the University of California, San Francisco (UCSF) found that Tamas associates with mtDNA specifically when the mtDNA is being degraded during Drosophila spermatogenesis. They used RNA interference (RNAi) to knock down tamas during spermatogenesis. MtDNA is usually eliminated in mature sperm, but it remained in tamas-knockdown sperm.

Despite the presence of mtDNA in mature tamas-knockdown sperm, paternal mtDNA levels were much lower than expected in embryos generated by fertilization with these sperm. This suggested that multiple mechanisms ensure maternal mitochondrial inheritance, the authors wrote in their paper.

The researchers hypothesized that the capability of the Tamas enzyme to degrade nucleotides would be responsible for the destruction of paternal mtDNA, but they showed that a Tamas protein without exonuclease activity still resulted in sperm without mtDNA. They also found that the replication function of Tamas did not appear to play a role in eliminating paternal mtDNA.

“It seems that the catalytic activity of this subunit of mitochondrial DNA polymerase is not required for the degradation of the mitochondrial DNA, which leaves us with a lot of questions about the mechanism,” said Arama. “It’s not the canonical polymerase or exonuclease [functions], but probably another function that this protein has, which remains to be discovered.” Arama noted that Tamas may act in a complex with other proteins to facilitate the elimination of paternal mtDNA.

“More evidence is required to make sure that Tamas is directly involved in the degradation,” Hansong Ma of the Gurdon Institute at the University of Cambridge in the U.K., who was not involved in the study, wrote in an email to The Scientist.

According to coauthor Patrick O’Farrell of UCSF, another open question is how general the role for a mitochondrial DNA polymerase in elimination of paternal mtDNA is. “Maternal inheritance is really widespread,” he said. “There are a few exceptions, but for the most part it’s found throughout the entirety of phylogeny, and we don’t know whether exactly the same mechanisms are used.”

“Typically when we find these sorts of outcomes in fruit flies, they’re broadly applicable across animals,” Dowling told The Scientist. “I wouldn’t be surprised at all if this extends to our own species.”

Ma also noted that mtDNA destruction may take place outside of sperm. “This paper provides good evidence that Tamas is required for the elimination of mtDNA during spermatogenesis,” she wrote, “but we don’t know whether this role of Tamas is specific to testis, where mtDNA is purposefully eliminated to ensure maternal inheritance of mtDNA, or [if the enzyme performs this function] in other tissues.”

O’Farrell said his team will next explore whether mtDNA elimination happens outside of developing sperm. “We suspect that this process of destroying genomes may be playing a role in disease and in aging,” he said. “We don’t know at this point how far this is going to go, but we suspect strongly that the role in uniparental inheritance is going to be widespread, and we’re pretty sure that this is not only going to be happening in the male germline, but it’s going to happen in other places too.”