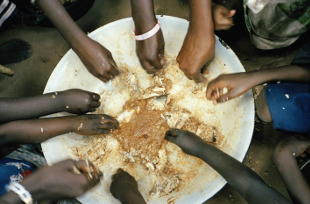 Maternal nutrition around the time of conception can affect the regulatory tagging of her child’s DNA from the earliest embryonic stages, according to a study published today (April 29) in Nature Communications, which focused on a population of women and children in Gambia.

The West African country has distinct rainy and dry seasons that dictate its inhabitants’ diets, making nutrition easy to track. Branwen Hennig from the London School of Hygiene & Tropical Medicine and her colleagues sought to determine whether Gambian women’s nutrition at conception affected their infants’ patterns of DNA tags, or methyl groups. The researchers profiled maternal blood samples, looking for nutrients linked to methylation, and examined methylation patterns of infant hair and blood DNA, homing in on specific sites called metastable epialleles—sequences where methyl groups appear to be added randomly, compared with the more-predictable patterning of...

Because Hennig’s team found similar methylation patterns in the blood and hair samples from the same individuals, and because these patterns varied among individuals, “the authors demonstrate that these loci properly fulfill the criteria of metastable epialleles,” Gavin Kelsey, an epigeneticist with the Babraham Institute and the University of Cambridge, told The Scientist in an e-mail. “This is clearly an interesting paper,” said Kelsey, who was not involved in the work, adding that the study extends upon previous reports linking maternal nutrition with epigenetic tagging in both mouse and human offspring.

“The real advance of this study is that we nailed it that these regions in the human genome are bona fide metastable epialleles,” said study coauthor Robert Waterland, a nutritional epigeneticist at Baylor College of Medicine in Houston, Texas. “Not only does [the variation] occur stochastically and is influenced by maternal nutrition before and during pregnancy, but also it occurs systemically,” throughout the early embryo, he added.

The team enrolled 167 women in a prospective study. Of these, 84 women conceived during the peak rainy season and 83 became pregnant during the peak dry season. The investigators then evaluated concentrations of methylation-related chemicals such as homocysteine, folate, and B vitamins in maternal blood samples correlated with conception season and methylation patterns of infant blood and hair sample DNA. They found associations between maternal biomarkers and increased or decreased methylation in infant DNA, and that all of the maternal biomarkers together explained about 10 percent of the variation in these infant DNA methylation patterns.

Hints at a maternal dietary influence beyond the offspring’s gene sequence first came from the Hungerwinter study of the Dutch Famine Birth Cohort, which included mothers who lived through the Dutch famine in World War II and their children born during that period. While that study focused on later development of diabetes and heart disease, other studies in mice and humans have pointed to specific mechanisms involving methylation and methylation-related nutrients in maternal diet and offspring health.

According to coauthor Andrew Prentice, director of the MRC International Nutrition Group at the School of Hygiene & Tropical Medicine, for the present study, his team did something the Hungerwinter study could not. Because he and his colleagues recruited mothers prospectively and focused on metastable epialleles, they were able to “identify the critical period when maternal diet has affected this process.” That time, he wrote in an e-mail, is “either occurring in the mother’s ovary some two weeks prior to conception or within the first two days or so of conception.”

Prentice noted the advice for women to take folic acid supplements before conceiving to prevent fetal neural tube defects. But, he said, “our results suggest that a cocktail of nutrients in addition to folic acid is needed.”

Kevin Mitchell, an associate professor of genetics and neuroscience at Trinity College Dublin who was not involved in the study, was more cautious about interpreting the study’s results. “It does seem like there are seasonal differences in serum levels of various biomarkers,” he wrote in an e-mail, but “an exploratory study like this should really have a separate replication sample,” he said.

Waterland agreed that the effects are “relatively subtle.” But he pointed to mouse studies showing that “a relatively large phenotypic effect was explained by a rather modest increase in DNA methylation.”

Prentice noted that this study replicates a previous result from their group in a separate population of women in Keneba, “so we feel very secure that it is a genuine finding,” he said.