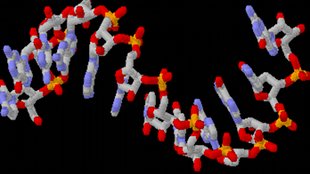 RNA moleculeWIKIMEDIA, CORENTIN LE REUNThe majority of mammalian protein-coding genes have a number of possible transcripts, generated by the variable inclusion of exons. It was thought that these so-called alternative splicing events might be conserved between species, but two studies published today (December 20) in Science reveal that most are not. The researchers even propose that the high degree of alternative splicing variability may be a driving force of species divergence .

“It was somewhat generally assumed that splicing differences that you see between brain and muscle in the mouse would be similar between brain and muscle in the human,” said Donny Licatalosi, professor of RNA molecular biology at Case Western Reserve University in Cleveland, Ohio, who did not participate in the studies, “but what both of these studies are showing is that is not the case. There is a large amount of species-specific alternative splicing.”

On the other hand, the papers show that most alternative splicing events differ widely between even closely related species. “The alternative splicing patterns are very different even between humans and chimpanzees,” said Blencowe. “Alternative splicing is evolving faster than gene expression,” concluded Tom Cooper, professor of pathology at Baylor College of Medicine in Houston, Texas, who was not involved in the work.

To assess alternative splicing patterns as well as transcription levels, both groups performed high-throughput sequencing of messenger RNA. They extracted RNA from a large array of organs of different vertebrate species, including frogs, chickens, primates, and humans. “It’s a massive amount of data,” said Cooper.

“These are very important papers that provide for the first time a large-scale view of the evolution of alternative splicing in vertebrates,” said Brent Graveley, professor of genetics and developmental biology at the University of Connecticut, who was not involved in the research. “They demonstrate how dramatically rapidly alternative splicing evolves, and suggest that it might play a role in speciation.”

The incredible capacity for alternative splicing could enable cells to try-out new versions of proteins without risking the complete loss of the originals, said Burge. Of course, if a new version then offers an advantage, the associated sequence changes to the splicing code will be selected for. “It is certainly an attractive model, and we think it is what’s going on,” said Burge.

His team found evidence that one way in which alternatively spliced exons could alter protein function was through removal or insertion of phosphorylation sites. Gene database searches revealed “alternative exons that are tissue-specific have a significantly higher density of predicted and validated phosphorylation sites,” Burge said. Phosphorylation states of proteins can influence their interactions, their activity, their subcellular localization, he explained, and alternative splicing could offer “a toggle switch” for controlling protein functions in cells. “That’s pretty new. . . . There hasn’t been an appreciation that splicing could be used in that way,” he said.

Of course phosphorylation is not the only way proteins are regulated, said Cooper. “My guess is there’s going to be a number of functional domains and regions that are going to be altered by splicing.”