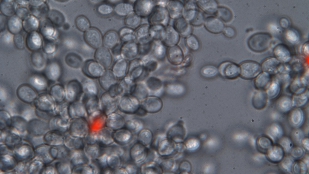 A yeast cluster with dead cells shown in redWILLIAM RATCLIFF, UNIVERSITY OF MINNESOTA

In as little as 100 generations, yeast selected to settle more quickly through a test tube evolved into multicellular, snowflake-like clusters, according to a paper published today (January 16) in Proceedings of the National Academy of Sciences. Over the course of the experiment, the clusters evolved to be larger, produce multicellular progeny, and even show differentiation of the cells within the cluster—all key characteristics of multicellular organisms.

“It’s very cool to demonstrate that [multicellularity] can happen so quickly,” said evolutionary biologist Mansi Srivastava of the Whitehead Institute for Biomedical Research in Massachusetts, who was not involved in the research. “Looking at the fossil record, we learned it took a very long time whenever these different transitions to multicellularity happened. Here they show it can happen very quickly.”

The evolution of multicellular life has long intrigued evolutionary biologists. Cells coming together and cooperating for the good of the group goes against basic Darwinian principles. Yet multicellularity has evolved some two dozen times independently in nature, and has shaped the world as we know it.

But because most transitions to multicellularity happened more than 200 million years ago, many questions remain about how it happened. What were the ecological conditions that drove the transitions? And how did organisms overcome the conflicts of interest that accompany any sort of cooperative effort?

To gain a better understanding of the initial leap from singularity, University of Minnesota evolutionary biologist Michael Travisano, his postdoc Will Ratcliff, and their colleagues decided to see if they could recreate such a transition in the lab. Their strategy was simple: grow yeast in test tubes, shake up those test tubes every 24 hours, and select those organisms that fell to the bottom quickest to transfer to new media and propagate the population. After 2 weeks and about 100 generations, the researchers began to see the yeast forming snowflake-like clusters that dropped to the bottom of the test tubes 34 percent faster than single cells.

“We went to the microscope and were blown away,” Ratcliff said. “They form these clusters, and these clusters have these emergent properties of multicellular life.”

The clusters continued to evolve over the course of the experiment, growing larger and asexually producing multicellular progeny. The yeast showed signs of having juvenile and adult life stages—only producing progeny once the cluster reached a certain size. They even evolved a kind of division of labor among the cells of the cluster, with certain yeast cells more readily undergoing apoptosis. Those apoptotic cells sacrificed their own reproductive output, but seemed to aid the reproduction of the entire cluster by allowing smaller cluster progeny to break off from the parent.

Multicellular Yeast from thescientistllc on Vimeo.

These results indicate that the clusters, not the individual cells, were the unit of selection—“the key evolutionary step in how you get multicellularity evolving,” Ratcliff said.

But this is just one experiment under admittedly contrived conditions. “What remains to be seen for me is how relevant is it to actual transitions to multicellularity,” said Srivastava.

Indeed, the authors of the PNAS study admit that selecting for yeast cells or clusters that settled most quickly isn’t exactly a “natural” selection pressure. But there could be some important lessons here, Ratcliff insisted. “If we really understand the way that multicellularity can evolve, then that gives us a lot of insight to how this could have occurred in the past,” he said.

The clusters, for example, were all the result of incomplete cell division—daughter cells sticking to their parent cells. A similar result was recently found in choanoflagellates, the closest single-celled relatives of animals, suggesting that post-division adhesion may be an important mechanism for the initial leap to multicellularity. In contrast to aggregation—mechanisms of multicellular formation in slime molds and biofilms—cells that adhere following division are all highly related, which may help reduce within-cluster conflict.

The question now is what molecules and genes underlie such changes. “Were there any changes in expression of signaling genes after they selected the snowflakes?” Miller asked. Additionally, “it would be really cool to look at what the underlying genetic changes were that led to these [multicellular phenotypes],” added Srivastava.

Indeed, Ratcliff and his colleagues have already sequenced the common ancestor of their snowflake yeast populations, as well as several independently evolved cluster lines, and are working to analyze and publish that data.

(Read more about the efforts going on to understand the evolution of multicellularity in last year’s feature story, From Simple to Complex.)