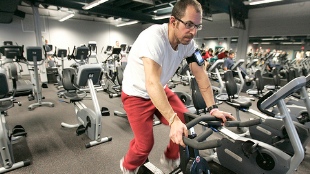 Exercise can delay the onset of diabetes by boosting the expression of genes involved in muscle oxidation and glucose regulation. A new study, published today (March 6) in Cell Metabolism, suggests that DNA methylation drives some of these changes, and that they can occur within just a few hours of exercise, providing a potential mechanism for how exercise protects the body from metabolic disease.

“It’s one of the first studies that really proves that DNA methylation can affect things in a very short timeframe,” said Marloes Dekker Nitert, who studies diabetes epigenetics at Lund University in Sweden and was not involved in the research.

People with type 2 diabetes are less responsive to insulin than healthy individuals, and thus have difficulties maintaining normal blood sugar levels. Certain metabolic genes, such as those involved in glucose transport and mitochondrial regulation, have been shown to...

“Exercise is one therapeutic to maintain sensitivity of the organs to insulin and prevent diabetes,” said molecular physiologist Juleen Zierath of the Karolinska Institute, who in 2009 showed that diabetics have different DNA methylation patterns in muscle. This suggested “there might be some dynamic changes in methylation” after exercise, said Zierath, who teamed up with Romain Barres of Copenhagen University and others to further investigate a possible epigenetic mechanism of exercise-induced diabetes prevention.

The researchers took thigh muscle tissue samples from 14 healthy people who did not exercise regularly before and after they rode on an exercise bike for 20 minutes. Homing in on metabolic genes that tend to be expressed in lower levels in type 2 diabetics, they saw that, within three hours of exercise, promoters for these genes lost their methyl marks, making them available for transcription. Indeed, these methylation changes in turn correlated with upregulation of the genes.

“We know that the epigenome…is supposed to be quite stable,” said Ling. “This paper shows that this is a fairly dynamic process.”

The studied genes have a variety of metabolic functions. PGC-1a is a transcription factor that increases the oxidation of muscle, TFAM regulates the transcription of mitochondrial DNA, and MEF2A regulates the transport of glucose in and out of cells. “All of these genes have been previously shown to be involved with exercise,” said Charlotte Ling, an epigenetics research at Lund University, who did not take part in the study. “And they’re also connected to diabetes.”

The researchers then confirmed in vitro that the changes were due to the muscle contraction of exercise, rather than neurotransmitters or other circulating factors such as hormones. More specifically, stimulating rat muscle cells with caffeine to mimic exercise-induced calcium influx, they found that the calcium flow induced the methylation changes.

Evidence of such transient epigenetic changes is exciting, said Ling, but the changes didn’t last long: within a few more hours of the initial increases in gene expression, the muscle methylation and expression levels returned to baseline. This begs the question of whether the effects will eventually stabilize with regular exercise, she said. “If you exercise a lot and you make these epigenetic changes, you wouldn’t just change your [short-term] expression, but [in the] long-term, change your genome. And maybe you will be more protected from diabetes due to epigenetic change.”

The results suggest it may be possible to “in some way manage the metabolism of your body through a lifestyle practice,” agreed molecular exercise physiologist Perla Kaliman from the August Pi i Sunyer Biomedical Research Institute in Barcelona, who was not involved in the research. “This shows that there is some molecular evidence to support that notion that exercise is a medicine,” Zierath added.