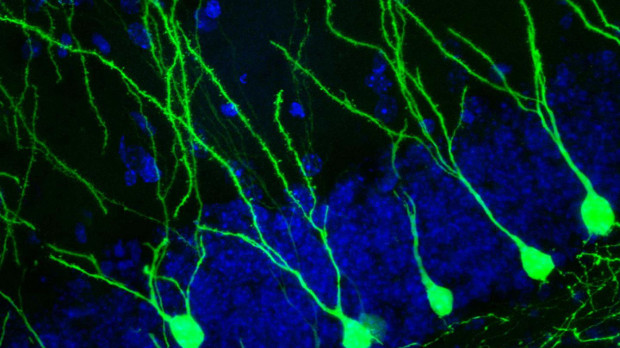 New brain cells (green) are induced by exerciseHENRIETTE VAN PRAAG AND LINDA KITABAYASHIWorking out is good for the brain. Now, a team of scientists from the U.S. and Germany has a clearer idea why. A protein called cathepsin B, produced and secreted by muscle during exercise, is required for exercise-induced memory improvement and brain cell production in mice, the scientists reported in Cell Metabolism today (June 23). They also showed that levels of cathepsin B are positively correlated with fitness and memory in humans.

“This is a super exciting area. Exercise has so many health benefits, yet we know so little about many of these effects at a molecular level,” said biologist David James of the University of Sydney who did not participate in the work.

“This paper provides a convincing mechanism that involves running-induced increases in a particular protein—cathepsin B—that appears to promote neurogenesis by enhancing expression of...

Running has been shown in animals to have a variety of effects on the brain, including enhanced memory function and increased production of new brain cells (neurogenesis). In humans, a correlation between exercise and memory function has also been observed. But how muscle activity might be mechanistically linked to memory has been somewhat of a mystery.

To hunt for mucle-produced factors called myokines that might modulate brain function, Henriette van Praag of the National Institute on Aging and colleagues treated rat muscle cells in culture with the drug AICAR—“an exercise mimetic,” explained van Praag, meaning it boosts the cells’ metabolic activities. Among the proteins upregulated in the treated cells was a secreted factor, small enough to traverse the blood-brain barrier, that had previously been shown to be upregulated in muscle during exercise: cathepsin B.

In mice that exercised for two to four weeks, plasma levels of cathepsin B were significantly increased, van Praag’s team found. And the animals showed improved memory as well as increased neurogenesis in their hippocampi—a brain region involved in learning and memory. Mice that were genetically engineered to lack cathepsin B, on the other hand, did not show these exercise-related effects.

In rhesus monkeys and humans, four months of treadmill training increased blood levels of cathepsin B, the team showed, and this increase was correlated with improved memory recall in the human study participants.

With that in mind, “the observation that [cathepsin B] might encode benefits of exercise in the brain is almost counter-intuitive,” said James.

If the link between cathepsin B and improved memory can be confirmed in humans, however, then “pharmacological targeting of cathespin b might be used to enhance cognition,” suggested Frankland.

Exercise itself might also provide such cognitive benefit, of course, but “a lot of people who are at risk of Alzheimer’s disease are not very mobile, or they have cardiovascular problems that prevent them from exercising,” explained study coauthor Emrah Düzel of the German Center for Neurodegenerative Diseases and of University Madeburg. “So identifying peripheral factors that you could substitute without having the need to actually exercise would be important.”