Mice that model a severe form of Alzheimer’s disease tend to exhibit improved memory after exercise-induced neuron production, according to a report in Science today (September 6). Similar improvements are also possible with an exercise work-around, by giving the animals a treatment to ramp-up neurogenesis together with a dose of brain-derived neurotrophic factor (BDNF).

“This paper was really exciting. . . . It is a proof of principle, in an animal model, that you can replace exercise by a bottled therapy,” says Alzheimer’s disease researcher Tara Spires-Jones of the University of Edinburgh who wrote a commentary about the paper, but was not involved in the research. However, “we’re a pretty long way from translating this study from mice into humans,” she adds.

Alzheimer’s disease is the most common form of age-related dementia, affecting approximately 5.5 million people in the US alone. The disease’s characteristic brain pathology includes the deposition of β-amyloid plaques, the development of neurofibrillary tangles, neuronal loss, and brain inflammation. But, exactly how these developments lead to cognitive impairment is unclear, and therapies aimed at clearing amyloid have so far failed to halt disease progression, says Spires-Jones.

Recently, evidence from mice and postmortem human brains has indicated that altered neurogenesis may also play a part in Alzheimer’s disease pathology. On top of that, exercise, which promotes neurogenesis, counteracts Alzheimer’s pathology in mice. In humans, exercise and a healthy lifestyle are linked to a reduced risk of developing the disease.

The production of new cells in the brain mainly occurs in the hippocampus—a region involved in memory formation that is particularly hard-hit in Alzheimer’s—says neurologist Rudolph Tanzi of Harvard Medical School and Massachusetts General Hospital who led the research. “But what we did not know was, how does neurogenesis—the lack of it, or induction of it—affect Alzheimer’s pathology and symptoms.”

To find out, Tanzi’s team turned to a mouse model of the disease. The team first eliminated the ability of young animals to generate new neurons and discovered that the mice developed a much more severe form of dementia.

They next asked, “If we induce neurogenesis, can we make the mice better?” says Tanzi.

Using either pharmacological or genetic approaches, the team ramped up the production of new neurons in the animals’ brains. But, to their surprise, “it had no effect at all on pathology or symptoms,” Tanzi says.

Upon investigation, the researchers discovered that the new neurons weren’t surviving long-term. As Tanzi puts it, new neurons being produced in the Alzheimer’s brain is like “babies being born in a battle zone. They don’t survive and they can’t help you.”

If the team promoted neurogenesis by allowing the mice to exercise, however, the new cells did survive and differentiate. Moreover, the animals’ cognitive abilities improved.

So, what was different between the exercise and the experimentally induced production of neurons? The team discovered that, in addition to ramping up neurogenesis, exercise leads to an increase in the levels of BDNF—a factor that promotes both the survival and differentiation of brain cells. When the team genetically or pharmacologically increased BDNF levels in addition to neurogenesis in sedentary animals, “voila,” says Tanzi, “we were able to mimic the effects of exercise.”

“This [work] continues to emphasize the importance of physical exercise in sustaining the brain and fighting off brain degeneration,” says neurologist Samuel Gandy of the Icahn School of Medicine at Mount Sinai in New York who was not part of the research team. “It also highlights particular molecules that we might target in order to optimize the benefits of exercise, or [for patients who are disabled or frail], to take the place of the exercise altogether.” 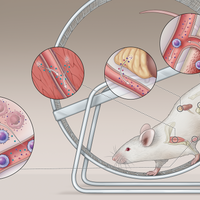