Exosomes in the blood that originated from brain cells carry biomarkers that indicate the severity of traumatic brain injuries, researchers reported in Brain Injury in June. The authors say certain proteins in these vesicles could help predict the progression and long-term effects of the brain damage.

“Developing a peripheral blood test to track TBIs [traumatic brain injuries] is a holy grail,” says John Lukens, a neuroscientist at the University of Virginia School of Medicine who was not involved in the study. Showing that blood-derived biomarkers can be predictive of the issues individuals with TBIs might experience, he says, is a big advance toward achieving that goal.

Past studies have shown that elevated levels of tau and amyloid-β in blood plasma are associated with post-concussive symptoms after a TBI, and postmortem studies of the brains of athletes that have had repeated head injuries also have shown increased levels of tau. The detection of amyloid-β in postmortem brain tissue has been tied to repeated hits to the head that didn’t cause concussions but hinted at brain injury. Other research has also suggested links between brain inflammation, TBIs, and posttraumatic stress disorder (PTSD), but such connections have been hard to identify using blood biomarkers.

In the new study, Jessica Gill, who studies the neurobiology of trauma at the National Institute of Nursing Research, and colleagues collected blood from 60 men and 4 women who served in the military. Some of the individuals had suffered mild TBIs, while others had not. The team then used recently developed nanoparticle sorting technology to isolate individual exosomes—extracellular vesicles that carry contents from their cells of origin—from the soldiers’ blood.

Exosomes from brain cells cross the blood-brain barrier and can give clues to inflammation and injury in the central nervous system, notes study coauthor Dimitrios Kapogiannis, a neuroscientist at the National Institute on Aging.

The team looked at the levels of tau, amyloid-β 42, and interlukin-10 (IL-10) carried by the exosomes. Levels of the biomarkers were significantly higher in military personnel who had experience mild TBIs compared with those who had not, the team found. The results also revealed that higher tau levels correlated to having chronic post-concussive symptoms and higher IL-10 levels were tied to the presence of PTSD symptoms. These observations suggest exosomes could be used as prognostic markers to determine if individuals with TBIs are at risk for developing chronic symptoms, Kapogiannis says.

“We are beginning to see that neuronal damage can be identified in plasma neuronal-derived exosomes in different brain injuries,” says Lynn Pulliam, a pathologist who studies neuroinflammation at the University of California, San Francisco, who was not involved in the study. “I think this is just the beginning,” she writes in an email to The Scientist, explaining that other blood biomarkers “will be identified to better diagnose mild TBIs and PTSD.”

Gill, Kapogiannis, and their colleagues plan to look for those blood biomarkers in further studies, and they also plan to study tau, amyloid-β 42, and interlukin-10 in more military personnel suffering from TBIs, along with athletes and nonathletes who suffer head injuries. 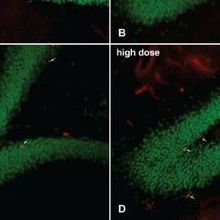 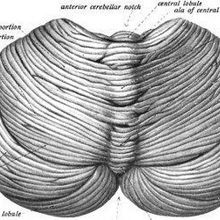