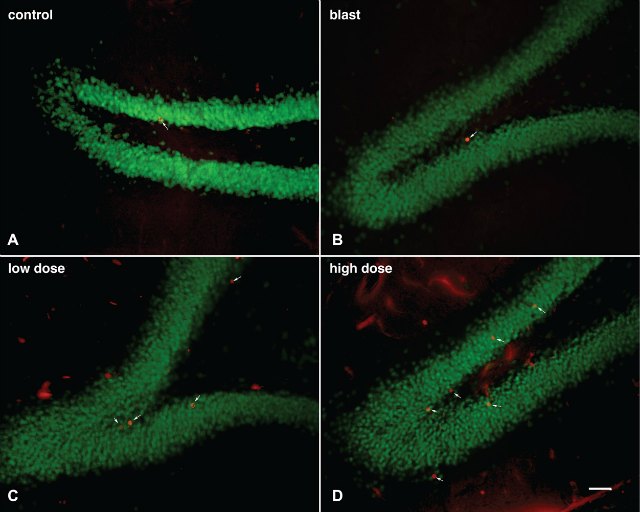 BCI-838 stimulates hippocampal neurogenesis in blast-exposed rats. Shown are sections of the hippocampal dentate gyrus stained for bromodeoxyuridine (red), which labels dividing progenitor cells, and the mature neuronal marker NeuN (green) from vehicle-treated controls (A), vehicle-treated, blast-exposed rats (B), and blast-exposed rats treated with a low dose (C) or a high dose (D) of BCI-838. Bromodeoxyuridine-labeled cells are indicated with arrows. Scale bar: 50 microns. GREG ELDERPeople who experience blast-related trauma to the brain, a condition that has become more and more common among combat veterans, can later experience depression and heightened anxiety, even in the absence of a psychological stressor. Patients are usually treated with medications (particularly antidepressants) and behavioral therapy, but these are often only partially effective.

In search of a more-effective drug, researchers have found that a compound that blocks certain glutamate receptors in the brain reverses many of the post-traumatic stress disorder (PTSD)-like symptoms...

“What makes this paper a really nice addition to the literature is that it comes from a good group that over the years has honed and refined a very legitimate, biologically relevant, and battlefield-relevant animal model,” says David Cook, who studies neurodegenerative disease at the VA Puget Sound and the University of Washington and who was not involved in the study. “This compound, which has plausibility for clinical use, was quite efficacious in ameliorating the PTSD-like symptoms that were caused by blast exposure a long time afterwards. This is the kind of stuff everyone is looking for.”

Recent improvements in body armor have increased the chance that military personnel survive blast exposures that, a few years ago, would have killed them. But the result is that mild, repetitive TBI has become a signature wound of the wars in Iraq and Afghanistan, explains Cook. It isn’t unusual to encounter veterans who have been exposed to—and survived—more than 100 blasts, he says.

Similar to antidepressants that affect the neurotransmitters serotonin and norepinephrine, the drug promoted the growth of new neurons in the dentate gyrus, a part of the hippocampus.

Returning veterans often exhibit long-lasting behavioral symptoms, but there is “controversy over how much of this is TBI and how much of this is PTSD,” says Greg Elder, a co-senior author of the new study and neurologist at the James J. Peters Veterans Affairs Medical Center and the Icahn School of Medicine at Mount Sinai in New York. While PTSD is a psychologically based reaction to a stressor that isn’t necessarily associated with a physical injury, TBI is a physical injury to the brain, he explains.

To understand why the two conditions often occur together in returning veterans, Elder partnered with Stephen Ahlers, a researcher at the Naval Medical Research Center in Silver Spring, Maryland, who over the last several years developed a rat model of blast-related injury to the brain designed to mimic mild TBI. In the rats, the blast injury is given under anaesthesia, so there is no psychological stressor, and Ahlers has found that the rats exhibit behavioral changes, such as an enhanced startle response, altered fear learning, and anxiety.

As Ahler and Elder were exploring TBI with this rat model, Elder’s colleague at Mt. Sinai, Sam Gandy, was investigating Alzheimer’s disease in a different rat model. Gandy found that a compound called BCI-838 improved memory and reduced anxiety in these animals. Ahlers, Elder, and Gandy became curious about whether the compound could relieve the same symptoms in the rat model of blast-induced TBI. BCI-838 is a group II metabotropic glutamate receptor antagonist, meaning that it blocks the activity of certain glutamate receptors on neurons, thereby increasing the cells’ activity.

Led by Georgina Perez-Garcia, a postdoc in Elder’s group, the researchers exposed rats to the blasts once a day for three consecutive days. The blasts were produced in a metal tube one foot in diameter and 19.5 feet long, divided into a compression chamber and an expansion chamber that were separated by a Mylar sheet. The rats were anesthetized and secured in the expansion chamber, while a compressor in the other chamber created pressure until the Mylar sheet ruptured, creating a blast.

Two weeks after the last blast, the investigators gave the rats either no drug, a low dose of the drug, or a high dose of the drug. Then they conducted a battery of behavioral tests to assess anxiety, startle response, fear response, and memory, all of which were previously shown to be altered in this rat model of mild TBI. They found that the drug improved fear-related behaviors and restored long-term recognition memory, they report in the new paper. One thing it did not affect was the startle response. Elder says he suspects that’s because the receptors for the drug aren’t present in the part of the brain that mediates this behavior.

It isn’t unusual to encounter veterans who have been exposed to—and survived—more than 100 blasts.

Elder’s group also discovered that, similar to antidepressants that affect the neurotransmitters serotonin and norepinephrine, the drug promoted the growth of new neurons in the dentate gyrus, a part of the hippocampus. Although intriguing, it isn’t clear whether that’s the mechanism by which the drug reverses some of the symptoms related to mild TBI in rats. “We certainly would like to know more about the mechanisms of action of this drug,” Elder says.

As Elder and his team are now working to understand how the drug affects the pathophysiology in the brain after blast injury, Gandy is pursuing human clinical trials of BCI-838 among combat vets.

“It is a really well-rounded paper,” says Patricia Tremblaye, a postdoc at the University of Pittsburgh who was not involved in the study, referring to the combination of behavioral studies and histological work. “It will be interesting to see how the drug treatment will do in the clinical population, as similar drugs, such as ketamine, have shown negative side effects, which may [outweigh] the benefits,” she added by email.

Clarification (February 2): The article has been updated to note that Elder is a co-senior author, not the senior author.