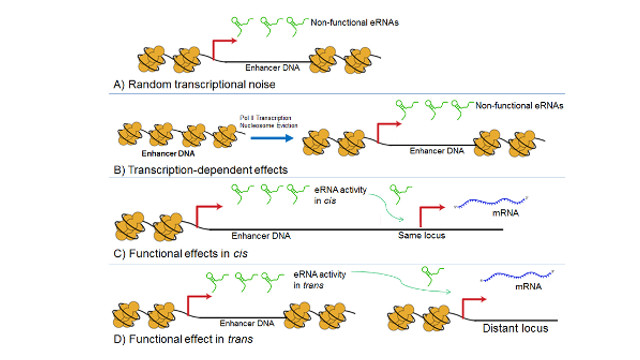 Four mechanisms by which eRNAs can functionWIKIMEDIA, PCLERMONTThere’s a lot that scientists don’t yet know about enhancers, genetic elements first described almost 35 years ago that, unlike promoters, can upregulate genes from some distance. That distance, while generally under 100 kilobases, can vary greatly. Usually, enhancers regulate the genes closest to them, but not always; the enhancer for the developmental gene Sonic hedgehog is a megabase away from its promoter in the human genome. What scientists do know is that enhancers seem to play key roles in human biology. One recently published atlas of enhancer expression in the human genome suggested that enhancers, which are expressed differently across cell types, could help explain how one genome encodes so many different kinds of cells. The same paper reported that single-nucleotide changes associated with human diseases are over-represented in enhancers and promoters relative to exons.

ERNAs are fairly short, ranging in length from 500 basepairs to 5 kilobases. Most of the time, although not always, enhancer RNAs are transcribed from both DNA strands, producing what are called bidirectional transcripts. As the Greenberg lab originally found, eRNA production correlates with the production of mRNA from the genes that enhancers regulate.

What might those functions be? Scientists have crafted a few hypotheses, although most agree that the mechanisms by which eRNAs function remain a mystery.

One thought is that eRNAs represent transcriptional noise. That’s a view held by Albin Sandelin at the Bioinformatics Centre of Copenhagen University, who led the aforementioned enhancer atlas project. “Something that most people believe is that the enhancer, when it’s active, it loops in to the promoter, and then the concentration of RNA polymerase II will be a lot higher,” Sandelin told The Scientist. He referred to the idea that enhancers upregulate genes by physically interacting with target promoters; as enhancers and the promoters they regulate are usually on the same chromosome, this interaction creates a loop of DNA between the two genetic elements. “I think that most of the eRNAs are due to this: you have piece of open DNA, which is the enhancer, near a promoter with high concentrations of RNA polymerase II, and then you will get transcription of the enhancer.”

This idea is supported by the fact that, because they are so short, eRNAs tend to degrade rather quickly. “There are a few cases where [enhancer RNAs] are proven to be functional; I just personally don’t think that the majority work that way,” Sandelin said. “[But] it seems to me that this [supposed function] is a byproduct of proximity to some sites that have a lot of polymerase II.”

Another hypothesis suggests that the act of transcription trumps the importance of the transcripts themselves. Experiments in macrophages, led by the University of California, San Diego’s Chris Glass, support this idea.

“I don’t think that transcription at enhancers is noise,” said Vittorio Sartorelli, a researcher at the National Institute of Arthritis and Musculoskeletal and Skin Diseases (NIAMS) who has studied eRNAs in the context of myogenesis. “Whether eRNAs are absolutely required in every situation or the act of transcription at enhancers is the major determinant, I think that it’s still open for debate,” he said.

Several studies have presented evidence to suggest that eRNAs do play a key role. As described in a 2013 Nature paper, the Rosenfeld lab found that estrogen bound to its receptor in breast cancer cells increases expression of particular genes by binding to enhancers and inducing the transcription of eRNAs. Eliminating the eRNAs using both RNA interference (RNAi) and antisense oligonucleotides—which bind to the RNA and lead to its degradation by an RNase—reduced the ability of enhancers to upregulate gene expression. Depletion of eRNAs in this system also reduced looping between enhancers and promoters.

“Using two different strategies, there [was] evidence that the presence of the interrogated eRNA is important for activation of the target gene and for the interaction between the enhancer and the cognate regulated promoter,” said Rosenfeld.

Taking the reverse approach, the researchers also tested whether eRNAs could upregulate transcription independent of the enhancer itself. Rosenfeld and his colleagues experimentally tethered eRNAs to a promoter driving expression of a luciferase reporter gene in a plasmid construct. When this construct was transfected into cultured breast cancer cells, luciferase expression was upregulated about 2.5-fold.

“These data indicate that the interrogated eRNA plays a functional role, at least in this system, in activation of the coding target gene,” said Rosenfeld. “But it does not distinguish between the alternative possibilities that this is because of a specific sequence in the eRNA that might interact with a regulatory factor or that some other function of the eRNA . . . underlies its role.” He reiterated the idea that in some cases, transcription independent of the resulting eRNAs is functionally important.

Scientists, such as Reuven Agami from the Netherlands Cancer Institute, the NIAMS’s Sartorelli, and San Diego’s Glass, have reported similar results in other systems. To further elucidate the potential functions of eRNAs, they’re continuing to manipulate eRNA sequences and perform biochemical tests to determine what these transcripts might be doing.

“It will be important not to make the mistake of thinking that all eRNAs are going to be the same,” said Greenberg. “It may be that at some enhancers, the sequence of the RNA actually doesn’t matter, that it’s just the production of the RNA . . . that that’s all you need. However, it’s possible that, through evolution, eRNAs at certain enhancers have taken on a life of their own.”

Greenberg said that some eRNAs could have functions unrelated to the promoters activated by their associated enhancers while others could play direct roles in gene expression. “I think that we need to keep an open mind as to what the functions are; there are likely to be multiple functions.”