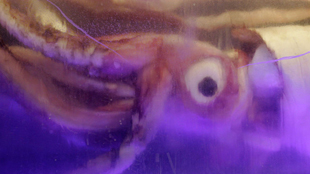 There is no competition. The giant squid has the largest known eyes in the animal kingdom—three times the diameter of the largest eyes of any other animal. Yet there has been no clear explanation for why giant squid need such big peepers.

Now, researchers at Lund University in Sweden have a theory: giant squid eyes are uniquely suited for detecting large predators at far distances. The theory, published today (March 15) in Current Biology, can be used to model other visual systems in deep, inaccessible aquatic environments, the authors said.

“It’s the first time I’ve ever seen such a close analysis of the selective pressures determining the size of an eye,” said Howard Howland of Cornell University, who has studied vision for over 50 years and was not involved in the research. “They’ve done a tremendous job analyzing the...

When Dan-Eric Nilsson and colleagues at Lund first began calculating vision based on eye size, they quickly determined that as small eyes get bigger, the range of vision in the ocean increases dramatically. But only up to a point: when the eyes reach about 9 centimeters in diameter, that range stops improving due to absorption and scattering of light in water, explaining why the eyes of fish do not exceed that size. “It pays to make eyes larger up to about the size of an orange, but then it pays less and less,” said Nilsson. But the giant squid’s eyes measure some 27 centimeters, about the size of a soccer ball.

To find out why the deep-sea squids had evolved such enormous eyes, the team developed a mathematical model to predict the eyes’ ability to detect different types of objects under various lighting conditions. The researchers concluded that giant squid eyes are not especially advantageous for detecting prey or mates. But they are uniquely suited for identifying very large predators, such as sperm whales, at distances of 120 meters and depths below 500 meters, where only low levels of light penetrate. As sperm whales move through the deep sea, they upset organisms like plankton in the water, which show their irritation by glowing, a phenomenon called bioluminescence, which the giant squid can detect thanks to their massive eyes. Particularly helpful are the squid’s large pupils, which the team estimated to be about 9 centimeters across, about the size of a softball, based on a 1981 photograph of a freshly caught giant squid in Hawaii and the body of an adult colossal squid that had been caught and deep-frozen in New Zealand in 2007. In the squid’s dark habitat, an especially large pupil is necessary to detect differences between a large target and its background, such as the dim glow of upset plankton against the black ocean.

Thanks to their impressive vision, giant squid can monitor a huge volume of ocean for predators, the researchers concluded—about 7 million cubic meters. Unfortunately for the squid, whale sonar range is about 200 meters—some 80 meters longer than the squid’s visual range—so whales are likely to locate their prey before the squid see them. But the ability to detect incoming whales gives the squid a chance to prepare an evasive manuver, said Nilsson. Squid, unlike whales, can cut quick, 90-degree turns. It is possible, therefore, that predation by sperm whales led to the evolution both of giant eyes and big, powerful bodies. “Both being giant and having large eyes help a squid avoid being taken by sperm whales,” said Nilsson.

The team next plans to use their model to predict how smaller eyes are used in the deep sea. “It’s poorly known because it’s so hard to access those places,” said Nilsson. “Now we can make predictions to tell what different eye sizes in different animals can actually see.”

“I’m sure this theory, which they’ve pioneered, will be used in a number of other investigations,” added Howland. “It’s a spectacular article.”