Observing patients’ eye movements may hold clues about neurological functioning. In a study published last month (August 25) in the Journal of Neurology, scientists show that subtle differences in eye movement patterns can be utilized to identify patients with Parkinson’s, fetal alcohol syndrome, or attention deficit disorder, providing hope for a quick and noninvasive strategy to aid in diagnosing these, and possibly other, neurological diseases.

“I am very impressed with the use of this eye tracking as a potential behavioral biomarker,” said Edward Riley, who studies fetal alcohol syndrome at San Diego State University, but did not participate in the research. The strategy could one day be used to rapidly screen children at risk for behavioral problems, he added, but whose mild symptoms may cause their issues to be overlooked.

Many diseases and disorders affect how we move our eyes, influencing both voluntary and involuntary movements. Disorders of attention, like attention deficit and hyperactivity disorder (ADHD), may change whether patients pay attention to the same objects in a video as normal controls. In other cases, changes in involuntary muscle control, like those seen in Parkinson’s disease, can affect how quickly our eyes move to take in new information on a screen.

Eye movements are a “sneak peak at the potential the brain has to do certain things,” said Beatriz Luna, who researches the development of voluntary behavioral control at the University of Pittsburgh, but was not involved in the study. Importantly, saccades—the short jerks that eyes make as they change position—are “the fastest motor movement the body can make,” she added. “You really can’t fake them.”

Drawing on a wealth of literature describing the subtle differences in eye movement between controls and patients with Parkinson’s, ADHD, and fetal alcohol syndrome disorder (FASD)—which, like ADHD, can affect planning and impulse control—researchers at the University of Southern California (USC) applied these insights to uncover subtle but defining differences in the way patients watch videos.

Lead author Laurent Itti and his colleagues first showed videos to 14 Parkinson’s patients and 24 healthy elderly controls. The researchers used special headgear to track participants’ eye movements—recording speed and direction and noting exactly where on the screen the individual was looking. Though neurological changes underlying Parkinson’s disease can affect attention, it was the changes in involuntary eye movements that allowed the researchers to classify patients.

The team discovered that Parkinson’s patients made more frequent and shorter eye movements, and devised a strategy that classified patients with greater than 89 percent accuracy.

Itti and his team next looked at whether eye movements could identify between children with ADHD or FASD. Once again, they showed the children videos and recorded their eye movements, then devised a model to predict any behavioral abnormalities. Sure enough, the model could classify ADHD children with 83 percent accuracy, FASD children with 79 percent accuracy, and distinguished between the two patient groups with 90 percent accuracy. In this case, the children were best classified by combining information about saccades with data on where the patients looked—did they pay attention to the same textures and contrasts as a group of normal controls? How did their attention compare to the locations that a computational model predicted would be most “worth” noticing?

“The ability to really differentiate between ADHD and FSD was really compelling to me,” said Luna, noting that ADHD often co-occurs with many other disorders, including FASD, which can make it difficult to accurately diagnose children. If a child’s impulse control stems from ADHD, she explained, they’ll require different medication and intervention than a child whose primary problem is caused by prenatal alcohol exposure, making accurate diagnosis paramount.

More work is needed on larger populations to fine-tune the videos and models used, Riley noted, but the strategy has potential for identifying people with subtle disease symptoms. Some people with FASD, for example, exhibit planning and gullibility problems, but none of the more obvious physical features. It’s also possible, said Luna, that other disorders that affect eye movements, like schizophrenia, could also be amenable to this diagnosis strategy. “It’s so clever and elegant,” she said.

Currently, Itti and his team are working to test their strategy on more people, while making it even faster. “We’re trying to bring the viewing time down to 5 minutes,” Itti said. It’s unlikely to ever be a stand-alone test, he cautioned, but Itti envisions it as a portable, quick, and cheap first-step screening method that could help people decide whether to undergo more time-intensive and expensive tests. 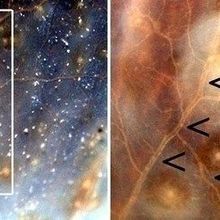