An analysis suggests that a commercially important mass migration of fish may have no real adaptive value.

Alex is normally a multimedia writer, and has contributed to educational outlets such as SciShow, SciShow Kids, and PBS Eons, as well as writing for AAAS and the American Chemical...

ABOVE: Sardines traveling in a large shoal
STEVEN BENJAMIN

They’re a dramatic subject for nature documentaries. In the southern hemisphere winter, swirling masses of silvery Pacific sardines (Sardinops sagax) migrate up the east coast of South Africa into the Indian Ocean—but for some, the trip ends too soon. Along the way, predators such as seabirds and marine mammals feast on the massive collection of fish, often dubbed “the greatest shoal on Earth.”

Indeed, according to a study published September 15 in Science Advances, the KwaZulu-Natal sardine run is an ecological trap: a scenario where the fish’s behavior drives them into an unfavorable habitat that decreases their chances of survival.

“Very little is known about the fate of these sardines,” says Peter Teske, a marine biologist at the University of Johannesburg and one of the authors of the study, in an email to The Scientist. But he and his colleagues conclude that unlike many migrations, which can be linked to feeding, reproduction, or both, the sardine run is something of a dead end.

Cape Agulhas, on the southwestern tip of the African continent, marks the dividing line between the Atlantic Ocean to the west and the Indian Ocean to the south and east. Fisheries to the south and west of the cape make the sardine one of southern Africa’s most commercially important fish, but the western fishery has declined. One of the goals of the study was to understand why southern sardines weren’t repopulating the western fishery. If the sardines were not a homogeneous group but split into distinct populations, it might also explain why only some participate in the northeastward migration.

Fewer than 10 percent of all sardines living off the South African coast participate in the winter migration, which only happens in certain years, depending on whether upwellings of cool water occur off the southeastern coast. These upwellings attract sardines eastward around South Africa, but the fish rarely leave the relatively shallow waters of the continental shelf. That shelf narrows off the southeastern coast, and just offshore is the Agulhas Current, which brings tropical water from the Indian Ocean that is too hot for sardines’ comfort. Trapped between the warm current and the shore, sardines in this area have only a small space to travel north. Why they go north at all has never been totally clear, but when they do, this stretch of narrow continental shelf brings together large numbers of them, forming the famous run that draws predators, human fishers, and tourists alike.

In the study, the research team set out to test the hypothesis that only a certain subgroup of sardines participate in the migration and explore why those sardines make the trip. “We initially suspected that there must be three stocks,” or distinct subpopulations, of sardines, Teske explains: east, west, and south, corresponding to the different water temperatures on different sides of the cape. That division based on water temperature would match patterns seen in some other marine species.

The study authors sampled sardines from runs in 2015, 2018, and 2019, as well as throughout their normal range. Comparing their DNA and mRNA, they found single nucleotide polymorphisms (SNPs) that were more common in western, Atlantic fish, while others tended to be found in southern, Indian Ocean ones, but they found no evidence for a third stock. The sardines captured in sardine runs matched more closely with the western group.

Teske explains that while the genetic differences between stocks were minimal overall, and there is evidence that fish from the west and south interbreed to some degree, the division into two subpopulations was “most strongly supported on the basis of genetic markers that show a strong correlation with water temperature.” Water temperatures are generally cooler in the Atlantic Ocean off the west coast than they are south of Cape Agulhas. While their functional significance isn’t known yet, the genetic markers identified in the study suggest that the two groups of fish are adapted to those different temperatures. And, Teske says, this explains why the sardines found in the run are those from farthest away, on the other side of the cape: the western fish’s preference for cooler waters makes them the most susceptible to being drawn into the run. 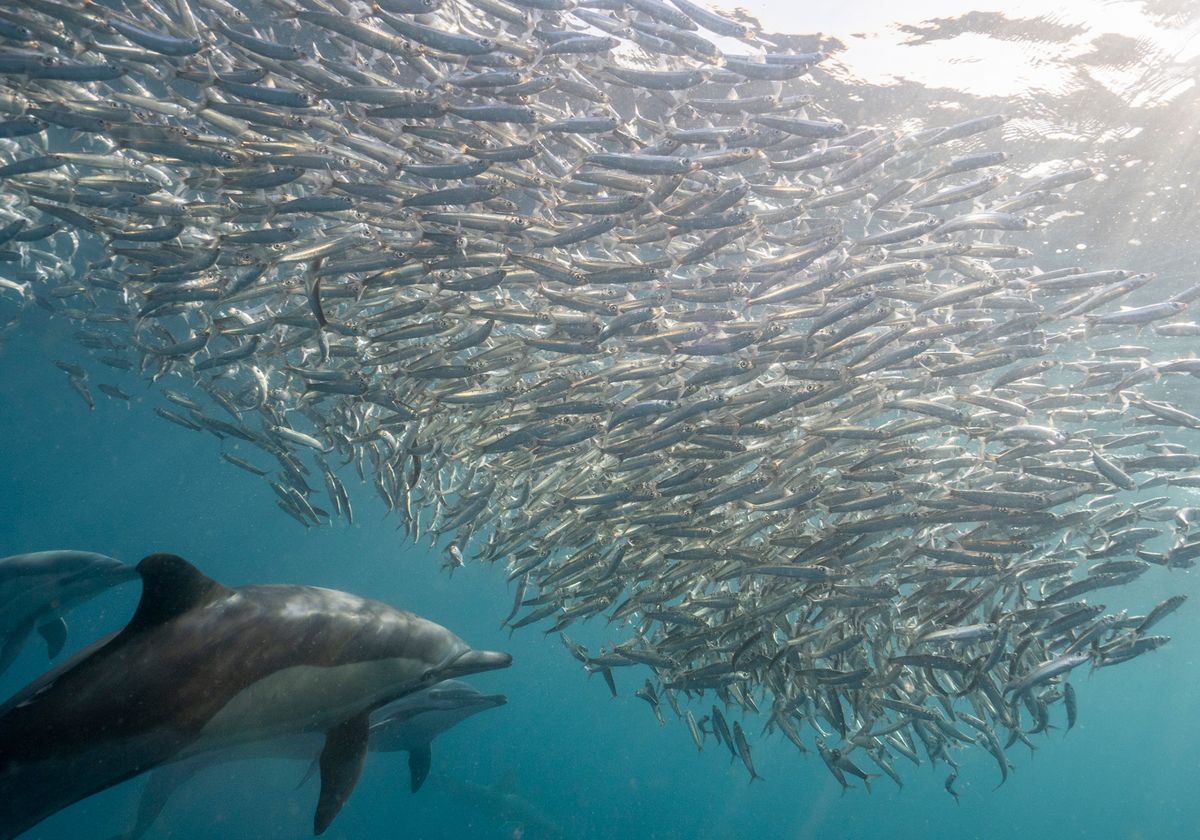 “As far as we can tell, the west coast sardines associate with upwelling regions, and they do not find many of those on the south coast. So they will likely keep moving until suitable habitat is found,” Teske continues. The Atlantic fish simply need cooler water, and they’ll follow it in the direction they find it, including those temporary pockets of upwelling. Eventually, he says, “some of these have migrated so far east that they eventually become attracted by upwelling . . . on the southeast coast.”

In the paper, the team says their genetic evidence suggests that the fish are therefore driven into a trap. That is, the behavior that drives them to seek cool water tricks them into swimming up the eastern coast into stressful warmer water instead. That’s to say nothing of the dangers: hungry sharks, dolphins, seabirds, and more waiting for a tasty treat.

Ecologist William Sydeman, president of the Farallon Institute for Advanced Ecosystem Research in Petaluma, California, who was not involved in the present research, says he’d like to see more research before he’s convinced this is a true ecological trap. Upwelling leads to plankton blooms, creating a lot of food for the sardines, he notes. So “I think [the fish are] doing it for a reason,” and more evidence is needed to show the full effect of the migration on fish that make the trip. It’s possible, he says, that “they migrate there in order to take advantage of temporarily productive ocean conditions at the western cape,” so if the area doesn’t suit them, he asks, “Why don’t they just do the reverse? Why don’t they move back?” (Teske speculates that one reason there’s no mass migration in the opposite direction of the run could be hungry predators following the sardines from the southeast, cutting off the return path.)

Likewise, Catherine Macdonald, a marine biologist at the University of Miami who was not involved with the research, suggests in an email that it’s worth considering whether the behavior is “possibly no-longer-adaptive” rather than something that was never adaptive in the first place. “As we continue to see the effects of global climate change intensify, I think we can expect to see many previously adaptive migratory patterns altered.” Previous hypotheses have posited, for example, the sardine run is a relic from the last glacial period, when the Indian Ocean would have been a more hospitable spawning ground for the sardines.

Research like this ultimately helps to manage fisheries. “We don’t want to manage two groups of fish that largely reproduce separately as though they were one group of fish that all reproduce together,” says Macdonald. The Atlantic sardine fishery in the region has already collapsed. By showing that west and south populations of sardines are distinct, Teske says, “we can not only explain this collapse, but also convince fishery management that if they overfish this region, the local sardine population will not simply get replenished from the south coast.”

In other words, we’ll be better able to protect the stars of the greatest shoal on earth.