Pacific salmon (Oncorhynchus spp.) are important to the fishing industry, Indigenous peoples, and endangered local populations of killer whales (Orcinus orca), but several salmon species have declined to the point of near extinction. To meet the demand for fish consumption, farmed salmon have become common, but aquaculture is a known spreader of diseases that infect wild populations. In a study published May 26 in Science Advances, researchers demonstrate that piscine orthoreovirus (PRV)—different strains of which cause anemia, jaundice, cardiomyopathy, and death in fish—was likely transmitted to wild Pacific salmon from farmed Atlantic salmon (Salmo salar) in the late 1980s.

“The paper shows convincingly that there’s repeated exchange or transmission between wild and domesticated species,” says Martin Krkosek, an ecologist at the University of Toronto who was not involved in the work. “We’ve suffered through the last year of COVID, most likely because of an intensification [of interactions] between human populations and wildlife populations, as well as the global transport of the virus. The same two scales of interaction are illuminated in this paper,” he adds. “We’re talking about fish in this paper, but I think it speaks to this broader problem with how people interact with the natural environment and how we’re creating opportunities for infectious diseases to wreak havoc on people, our health, and, in this case, our natural environment and food production systems.”

At the start of his postdoc at the University of British Columbia, Gideon Mordecai initially worked on salmon virus discovery more broadly, but he pivoted to working on PRV after hearing other researchers at conferences about salmon farming and health say that there was “no evidence for transmission of viruses between salmon farms and wild salmon,” he recalls. “And those kinds of statements always annoyed me because I thought, ‘Well, okay, maybe there’s no evidence, but it doesn’t mean it’s not happening.’”

He teamed up with Kristi Miller-Saunders, head of the salmon genetics program at the Pacific Biological Station in Canada, and other collaborators who use genomic sequencing to study how viruses move between different populations of people. In the new study, the researchers used similar strategies to trace the movement of PRV through salmon populations. 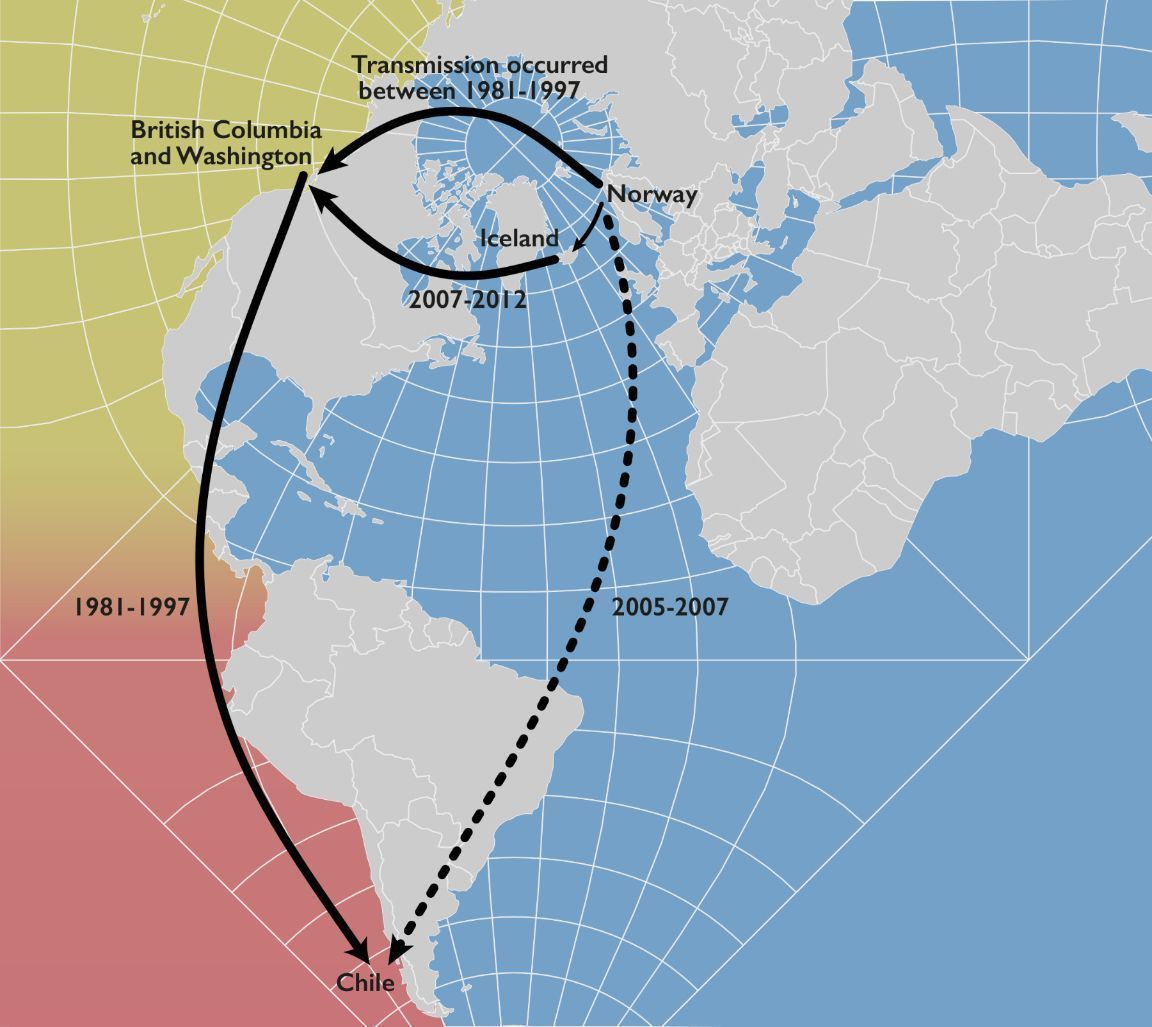 A global transmission map of piscine orthoreovirus (PRV). In addition to likely being passed from Europe to North America in the 1980s, the virus appears to have moved to Chile, where salmon farming is popular but there are no native species. A strain of the virus also likely moved from Norway, where Atlantic salmon are farmed and live in the wild, to Iceland.
SCI ADV, DOI:10.1126/sciadv.abe2592, 2021.

They sequenced the genomes of 392 PRV strains isolated between 1988 and 2018 from both wild and farmed salmon around the world. Based on their phylogenetic analyses, the team estimated that, in 1989, one strain seen in the North East Pacific, PRV-1a, diverged from the Atlantic form. This indicated that the strain was introduced to the Pacific in the late 1980s, potentially with the import of Atlantic salmon eggs from Europe for salmon farming at that time.

The researchers also examined the prevalence of PRV in Atlantic salmon at farms in the northeast Pacific, most of which are located along wild Pacific salmon migration routes. Most farmed salmon live in net pens through which water can be freely exchanged with the surrounding ocean. The team found that nearly all farmed salmon they tested were infected with PRV. The researchers then evaluated infection rates in wild Pacific salmon and determined that the closer the wild fish were to aquaculture sites, the more likely they were to be infected with PRV. The findings suggest that PRV infections are much higher in farmed fish than in wild fish, that freshwater hatcheries may be a source of PRV, and that the main direction of transmission is from farmed to wild salmon.

The study is “describing something which has . . . been suspected before: that PRV on the west coast of Canada and the United States [comes from] Atlantic salmon farming, and it arrived there approximately in the 1980s,” says Espen Rimstad, a fish virologist at the Norwegian University of Life Sciences who did not participate in the work. “If you have a virus . . . in Atlantic salmon, it may behave quite differently in Pacific salmon,” he adds. “A natural follow up would be to do experimental infection with different variants of PRV . . . and see how they behave in the Pacific salmon species.”

Pacific salmon populations have been declining since the early 1990s. Research has pointed to a variety of likely culprits, including climate change, habitat destruction, and overfishing. The extent to which PRV and other diseases have played a role is still an open question.

“There are all sorts of reasons why there’ve been declines in salmon populations over the last few decades,” acknowledges Mordecai. “I’m not saying viruses rule the world and do everything. But it’s one thing which we are in control of since we’re the ones doing the farming.”

Researchers suspect that many other pathogens have taken a similar route. “PRV is just the tip of the iceberg,” says Krkosek. “It’s one of dozens, if not hundreds, of species of viral and bacterial pathogens that we think are being passed back and forth” between farmed and wild salmon, he adds. “Trying to get a handle on which ones are likely to emerge and cause problems either in the fish farms or in wild salmon is a real problem.”