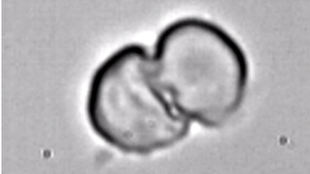 A pair of MIN6 cellsADAM HIGGINS AND JENS KARLSSONCryopreservation of individual cells—most often germ cells, like sperm or eggs—can be accomplished with relatively little damage to the specimens, but freezing tissues or organs is significantly more challenging. One reason for the difficulty is that connected cells are prone to intracellular ice formation (IIF), which is usually lethal. It had been proposed that the gap junctions between cells in a tissue allow IIF to spread, but now researchers show that it is actually defects in the tight junctions that permit ice to penetrate the cells in tissues. The work is published today in the Biophysical Journal.

The paper “has important implications in explaining ice formation and the ensuing injury in tissues, a poorly understood phenomenon in cryobiology and regenerative medicine research,” John Bischof, a professor of mechanical engineering at the University of Minnesota, who was not involved...

For this investigation, study coauthors Jens Karlsson, an associate professor of mechanical engineering at Villanova University in Pennsylvania, and Adam Higgins, an assistant professor in the School of Chemical, Biological, and Environmental Engineering at Oregon State University, used adherent mouse MIN6 insulinoma cells, which stick together in pairs. They used MIN6 cell lines with normal gap junctions and those that were treated with antisense RNA to the gap junction protein connexin-36. The researchers recorded high-speed cryomicroscopy videos and played them back in slow motion to watch the cells freeze. They saw that even in cells with lower levels of connexin-36, IIF still occurred, and even increased. “Whether the gap junctions were there or not did not seem to really affect whether the ice was able to propagate from cell to cell,” said Karlsson. “It was very surprising.”

The researchers observed paracellular ice penetration (PIP)—ice forming in the space between cells. In most of the cell pairs, PIP preceded IIF, and the temperature range at which PIP occurred pointed to penetration of the openings in the tight junctions at cell interfaces. “It’s usually difficult to pass in between the cells because the tight junctions that [join the cells together] form these seam-like structures that [act as] barriers,” said Karlsson. “We found that the ice that comes from the outside can actually find a path through those barriers and enter into the spaces that are between the cells,” he continued. “That is ultimately what triggers the cell to freeze.” The involvement of the tight junctions also explained the increase in IIF observed in the cells treated with antisense RNA because those cells are also deficient in the tight junction protein occludin, and therefore have a defective barrier.

“It is an important paper,” said cryobiologist Peter Mazur, a professor at the University of Tennessee, Knoxville, who was not involved in the work. “Many single cells have been cryopreserved [without damage], but actually very few tissues or organs have been,” he explained. With this paper, the authors have illustrated the importance of remembering “that a tissue is not just assembled cells stuck together,” Mazur continued. Instead, the tissue involves “complicated interactions between the individual cells.” He said that because the authors froze the cells in saline solution, without using any of the cryoprotective agents that are commonly used for cell freezing, it will be important to test whether the paper’s findings are applicable to other cryopreservation conditions.

“Our goal is to develop mathematical models that will allow us to predict whether the tissue is damaged” after freezing, said Karlsson. “That’s the reason that we need to understand what causes the damage” in detail, he added. In the future, Karlsson hopes to use the models to develop best practices for transporting and storing tissue-engineered medical products.