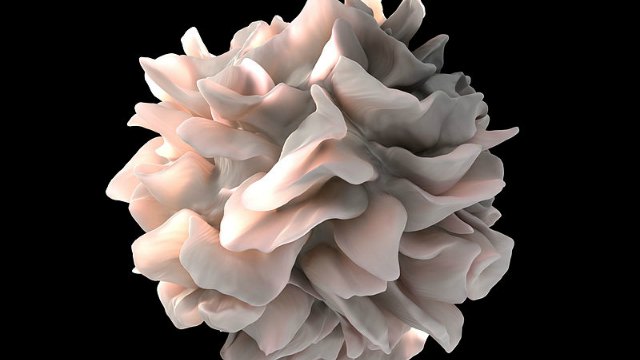 Artistic rendering of the surface of a human dendritic cell WIKIMEDIA, NATIONAL INSTITUTES OF HEALTHUntil now, much of human fetal immune development has been a black box. But a new study, published today (June 14) in Nature, reveals that dendritic cells appear in human fetuses early in the second trimester of pregnancy. These cells likely function to suppress an immune reaction to cells from the mother, the researchers found.

This study “extends our understanding of the ways in which the human immune system develops in utero,” says Mike McCune, an HIV researcher at the University of California, San Francisco, who did not participate in the work.

For the study, immunology researcher Florent Ginhoux of A*STAR in Singapore teamed up with Jerry Chan, a clinician at the Duke-NUS Medical School in Singapore who uses experimental gene and cell therapies to treat disease in the womb. “One...

Ginhoux, Chan, and colleagues collected fetal tissue from clinically indicated terminations between 12 and 22 weeks gestation (from the mother’s last menstrual period) and sorted and characterized fetal immune cells. The team expected immune system maturation to occur late, which would allow Chan to intervene early and avoid rejection. But to their surprise, “the system was starting to be established very, very early,” says Ginhoux.

The researchers found antigen-presenting cells, called dendritic cells, by 13 weeks of gestational age in fetal skin, spleen, thymus, and lungs. They showed in vitro that fetal dendritic cells were capable of responding to antigens from bacteria or viruses by activating T cells, just as adult dendritic cells did.

When the research team cultured the fetal dendritic cells with adult cells of a different genome, though, they induced the differentiation of regulatory T cells, which are involved in immune tolerance. This result indicated that the dendritic cells might be tamping down the fetus’s reactions to exposure to its mother’s cells.

“There has been a growing appreciation that the fetal immune system is not—as was previously thought—immature or non-functional,” says McCune. “Instead, it’s actually something that’s very functional, but quite different from that found in the adult.”

While the authors found globally similar gene expression profiles in fetal and adult dendritic cells, they also identified differentially expressed genes in pathways related to T cell education, immune suppression, and more. The researchers attributed the immune-dampening capabilities to arginase-2, which was highly abundant in fetal dendritic cells, but not in adult dendritic cells. They showed that arginase-2 interfered with the ability of both adult and fetal T cells to produce the proinflammatory cytokine TNF-α, which plays a role in T cell activation.

Ginhoux and colleagues want to further explore those functional differences. He hypothesizes that all immune cell types contribute to immune suppression and homeostasis in the developing fetus.

“Our aim is to develop a single-cell atlas of the fetal immune system,” Ginhoux says. “We want to map the whole system at different stages of development to provide a complete snapshot to the community of what the early, mid, and late fetal immune systems” look like.

John Tregoning, a vaccine developer at Imperial College London in the U.K. who did not participate in the work, agrees that what happens in the immune system during the late second and third trimesters is an open question.

“What they’ve done is difficult,” Tregoning tells The Scientist. But “there’s quite a gap between [the oldest fetal tissue examined in this study] and birth.” He adds that examining immune development in older fetuses will be challenging, if not impossible, given the difficulty of obtaining tissue samples from later in human development.

Despite the difficulties, the potential applications are promising. “Now that we understand how tolerance works in the fetus, can we apply that to situations in the adult where tolerance might be important?” says McCune. He explains that better knowledge of fetal immune tolerance could help avoid pregnancy complications such as miscarriage and gestational diabetes, as well as give insight into treating autoimmune diseases and avoiding immune rejection of organ transplants and cell-based therapies.

“Some of the events that occur during development might be important” in adult disease, says Ginhoux, “and now the fetal immune system is part of this equation.”