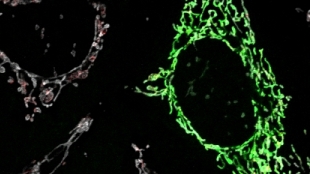 Mitochondria light up a cell.THE CELL

Mitochondrial DNA (mtDNA) in colon cancer cells undergoes less frequent mutation than healthy body cell mtDNA, according to a study published in PLoS Genetics this week (June 7). The finding flies in the face of the popular belief that tumor cell DNA is more highly mutated than the genetic code of normal cells, as has been established for nuclear DNA, and suggests a decoupling of nuclear and mitochondrial processes as colon cancer advances.

“The result impacts our understanding of the underlying mechanisms that take place during carcinogenesis,” said Lars Eide, a medical biochemistry professor at the Institute of Clinical Medicine in Oslo who works on mtDNA stability but was not involved in the study, by e-mail. “The increased fidelity of mtDNA during the carcinogenic process indicates that mtDNA mutations are not responsible for tumor formation.”

While there is currently no method that can detect the rate of change, Bielas developed a sensitive method of mutation frequency detection, called the Random Mutation Capture Assay, based on the ability of a mutation to inhibit a restriction enzyme's active site. This method digests all wild-type DNA, leaving behind only mutations and has a higher resolution than traditional methods, making it sensitive to mtDNA mutation frequencies approximately 100-fold lower than those detected by PCR, for example.

What they found surprised them. Rather than finding higher mutation rates compared with healthy tissue, they found that the mtDNA of the cancer cells carried fewer mutations.

“It almost seems like it’s an oasis,” said Bielas. “Most of the cancer cell looks like a bomb exploded inside, and yet you have this preserved genome.”

Bielas says the result suggested two possible mechanisms for new cancer therapies. Firstly, if healthy mitochondria are associated with growing tumors, then introducing more mutations to mitochondria may slow a tumor's progress. Bielas and his team are now testing the hypothesis that decreasing mutations in the mitochondria will make cancer cells more resistant to chemotherapeutic agents. If this is the case, they will then work on targeting the mitochondria to make them more sensitive.

“We definitely know there’s a lot of mutagens and chemotherapeutic agents that specifically target mitochondria,” said Bielas. “But this may not be the best way to approach this with minimal side effects.”

One reason mitochondria in cancers suffer fewer mutations may be that they are no longer providing the cells’ oxygen, reducing their oxidative stress. Mitochondrial activity has been associated with aging and cell death, and the theory here is that cancer cells shift to glycolysis, a non-oxidative form of metabolism, during their growth. This protects the cancer cell from the reactive oxygen species produced during oxidative metabolism carried out in the mitochondria, and may help them live longer. Reprogramming cancer cells to start using oxygen again may provide a second mechanism of cell destruction, likely with fewer side effects than targeting mitochondria. Bielas says they are investigating both methods, but that reprogramming cells is “more difficult.”

In addition to possible new cancer treatments, Bielas is optimistic that his Random Mutation Capture Assay may serve as a detection aid for identifying tumor-associated mutations that have made it into circulation.