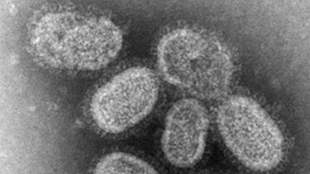 WIKIMEDIA, CDC, TERRENCE TUMPEYVast amounts of time and research dollars go into studying how the quickly mutating influenza virus works, anticipating which strains will be most active each year, and changing the flu vaccine accordingly. Researchers from the University of North Carolina, Greensboro, recently approached the problem from a different perspective by looking at the host’s response to the virus. Amy Adamson and Hinissan Kohio showed that flu infection is linked to glucose metabolism in mammalian cells. They presented their work today (December 15) in a poster session at the American Society for Cell Biology meeting in New Orleans, Louisiana, and in a paper published in September in Virology.

“Understanding host responses to infection will be important,” said Olivia Perwitasari, who is a postdoctoral fellow in Ralph Tripp’s lab at the Univeristy of Georgia and was not involved in the work. “The majority of the focus...

Adamson first became interested in host glucose metabolism and its link with influenza based on a screen in fruit flies, where glycolysis—the process by which glucose is converted to energy—pathway members appeared as potential regulators of viral infection. “It’s really kind of unconventional because most virologists are not going to be using fruit flies,” said Adamson, but “we’ve found some interesting interactions.”

To closely examine the connection, Adamson and Kohio fed Madin-Darby Canine Kidney (MDCK) cells increasing concentrations of glucose in the culture media and then challenged them with influenza A H1N1. They observed a dose response: the higher the concentration of glucose, the higher the percentage of cells that were infected with virus. The researchers showed that blocking glycolysis by treating cells with inhibitors lowered the percentage of infection in cells at high glucose concentrations by 80 to 90 percent. The drugs’ effects were reversed when ATP—the product of glycolysis used for energy—was added to the cells.

The scientists then used human cells—both HeLa and A549 lung carcinoma cells—to show that high glucose concentrations or directly added ATP both increased the assembly and activity of a proton pump called the vacuolar-type H+ ATPase (V-ATPase). That pump is known to play a role in viral entry into cells by regulating the pH in endosomes that must be acidic so that influenza genome can be released. They found that cells at high glucose concentrations had more acidic intracellular compartments. Plus, inhibiting glycolysis caused the disassembly of the V-ATPase, and using a drug to disassemble the pump resulted in a decrease in the percentage of infected cells, even at high glucose concentrations. The authors proposed that targeting glucose metabolism could help fight influenza infections in patients.

At high doses, the inhibitors that the researchers used adversely affected the cells, but Adamson is hopeful that they will be able to find the right amount to use. “We’re looking at trying to do very minimal doses to have the least bad effect on the cell [and] that could cause the greatest decrease in infection,” she says.

Charles Russell, an associate member in the department of infectious disease at St. Jude Children’s Research Hospital in Memphis, Tennessee, who did not participate in this research, said he found the work interesting “because they’re looking at host-based mechanisms that control flu replication.”

Experts also pointed out that there is previously published work in humans and mice suggesting that diabetes might increase susceptibility to influenza infection, and that this work could help explain that relationship. Russell said he would like to see follow-up studies that use a mouse model with diabetes “to tease out how it affects the replication of the virus.”

Perwitasari also remarked that the emphasis on cell culture over animal work is a limit to these findings that should be addressed in the future. “They can probably see if this is a really viable therapeutic strategy,” she said, but “what happens if you put it in vivo?”