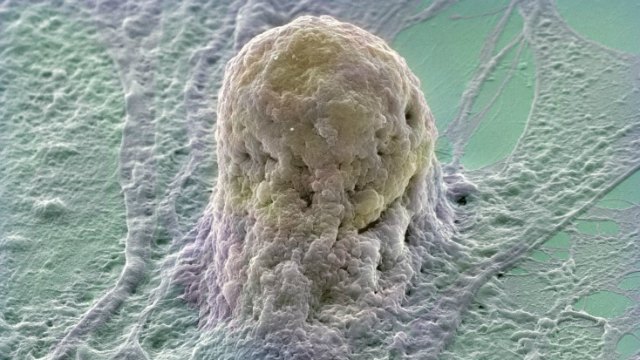 WELLCOME IMAGES, ANNIE CAVANAGHIn an effort to make it easier for researchers to develop stem cell–based therapies, the UK Stem Cell Bank is offering several ready-to-go human embryonic stem cell (hESC) lines derived from donated tissue that originated at in vitro fertilization clinics in the U.K. This is the first such bank of its kind. With appropriate consent and the use of clinical-grade manufacturing protocols, the lines were derived with the intent of applying them therapeutically, not just for research.

“We’ve had quite a bit of interest,” said Glyn Stacey, director of the UK Stem Cell Bank. “We hope to start releasing them in the coming weeks and months.” Three cell lines are currently available. Stacey said his organization anticipates another dozen will come online in this year.

Stem cell lines that have been used in human trials to date were either retrofitted from research-derived lines to suit...

“[That these lines] are deposited in the UK Stem Cell Bank means they are widely available,” said Geoff Lomax, the program officer for strategic infrastructure programs at the California Institute for Regenerative Medicine (CIRM), which funds stem cell research.

One of the biggest advantages of the banked lines having been established with human use in mind is that, from the get-go, they complied with the European Tissue and Cell Directives, which set the standards among European Union (EU) member countries for tissue- and cell-based therapies. Stacey said his group made sure the cells were abiding by the rules “right from the donor selection, procurement of tissues, the consent process, the storage of the cells, and the transfer of the cells to the lab where they were derived.” He added that the cell lines “were derived in a facility with not only a clean room but also one which had a license to supply cells for clinical application.”

Lomax said the bank’s procedures for procuring the lines meets all of CIRM’s requirements. “Because we know they have a set of defined procedures . . . to really ensure the appropriate collection of these materials, CIRM grantees could use those lines without having to evaluate them against any of our rules.”

Moreover, the bank intends to supply users with a full documentation of the cells’ histories—the associated consent, plus information on their derivation, handling, testing, exposure to reagents, and more. This is a big time saver, said Melissa Carpenter, the president of Carpenter Group Consulting, which guides academic and industrial teams through the translational research process. “One of the things that is a real struggle for small companies or academic investigators is getting all the information about a cell line,” she said.

For research use, an hESC line from the UK Stem Cell Bank costs about £375 ($468). To use a cell line in the clinic or commercially, customers must apply for a license with the organization that developed it (the three “MasterShef” lines currently available were deposited by the University of Sheffield).

Jane Lebkowski, the president of research and development and the chief scientific officer of Astelis, said the cell bank is a great first step to get clinical trials on hESC-based treatments off the ground. Having such characterized lines wasn’t a luxury afforded to her when she was in charge of Geron’s embryonic stem cell program, helping to usher the first embryonic stem cell line to be derived into the clinic. “These [UK-banked lines] are much better starting material,” Lebkowski told The Scientist.

Still, she added, researchers will need to see how the cells perform. “For instance, once you’ve identified your line, you have to show it can make the appropriate cell type for your clinical trials,” Lebkowski said. “And show you can do this reliably.”

It remains to be seen how evaluation of these lines for therapeutic applications might fare under the Food and Drug Administration (FDA)’s authority in the United States. Lyndsay Meyer, a spokesperson for the agency, told The Scientist in an email that any product based on a cell line would have to go through an investigational new drug application.

One sticking point with developing therapies with the research-use cell lines approved for study by the US National Institutes of Health (NIH) is that there is no prion screening process that passes FDA muster. Stacey said the UK Stem Cell Bank will be deploying two different assays to test for variant Creutzfeldt-Jakob, a prion disease, but it’s unclear whether the lines will face the same issue with the FDA as the NIH-approved research lines.

That the cell lines were derived and maintained according to EU regulations wouldn’t preclude therapy developers from gaining product approval using those lines in the U.S., but “the sponsor would need to address any differences between EU and US regulatory requirements,” Meyer said. “When developing a product that utilizes a cell line as a starting material, having a cell line that has already been well characterized and qualified can be a significant advantage, and could potentially shorten the development time.”