ABOVE: A healthy adult bimaternal mouse with offspring of her own
LEYUN WANG

Over the last decade or so, researchers have generated mouse pups with genetic contributions from two female parents by manipulating imprinted genomic regions, where epigenetic modifications of the DNA restrict the expression of certain genes to one parent’s copy. In a study published today (October 11) in Cell Stem Cell, a team from the Chinese Academy of Sciences has improved on prior work by producing mice with two mothers that appear to grow normally—unlike the mice produced in previous efforts—and live to have pups of their own. They used a similar strategy to make embryos with two fathers, but the progeny did not survive long after birth.

“This is basically the first study that shows that you can generate a mouse from two fathers. It is impressive,” says Hendrik Marks, a biologist at Radboud University in the Netherlands who was not involved in the work. It was known that imprinting was important because of previous difficulty producing bimaternal and bipaternal embryos, he adds, “but now that [the authors] actually are able to generate these mice, this is a starting point. You can start looking at each imprinted gene and ask how it contributes.”

The most important part of this paper is that they managed to generate bipaternal embryos and let them develop to term.

In 2012, a team made up of many of the same researchers at the Chinese Academy of Sciences made mouse embryonic stem cells with half the normal number of chromosomes by injecting a single sperm into an egg without a nucleus. They followed up in 2013 by creating haploid embryonic stem cells from unfertilized eggs. Then, in 2015, the scientists injected the maternal haploid cells into oocytes to generate mice with genetic contributions from two mothers. Although the pups grew to be able to reproduce, they were overall smaller than wildtype animals.

In the current study, the authors wanted to both improve upon bimaternal mice and use their haploid stem cells to create the first mice with two fathers.

“The biggest challenge is that we didn’t know whether bipaternal reproduction” would be possible in mice, writes coauthor Baoyang Hu in an email to The Scientist. “Bimaternal reproduction, or parthenogenesis, is quite common among vertebrates in the nature, such as amphibians, reptiles, and fish. However, successful reproduction from two males is very rare,” and has only been shown in lab experiments in zebrafish, he adds.

Hu and colleagues found that bimaternal mice made with haploid stem cells bearing genetic deletions in two imprinted regions performed abnormally in behavioral tests and had a smaller body stature. To nudge them closer to typical mice, the team then deleted a third, 12.1-kilobase imprinted region upstream of Rasgrf1. They chose this gene because it is expressed differently in the brains of wildtype and bimaternal adults. They apparently chose right. The resulting offspring grew normally and showed no differences from controls in behavioral tests.

To tackle the problem of bipaternal embryos, the researchers harkened back to their 2012 work, in which they generated haploid stem cells by injecting a sperm into an enucleated egg. When the researchers inserted one of these haploid stem cells and another sperm into a fresh enucleated egg, development started to happen but the embryos stopped growing around day 8, and the placenta ceased growth shortly thereafter.

So they turned to a technique called tetraploid complementation that facilitates placenta development in embryos derived from embryonic stem cells. The authors derived diploid embryonic stem cells from a bipaternal embryo and after letting those cells grow into a blastocyst, they injected another haploid stem cell into the blastocyst.

Even with the extra steps, the research team had to delete seven imprinted regions, which had been shown previously to affect embryonic development, in order to successfully end up with bipaternal pups. Just one fewer deletion resulted in embryos that died quickly after birth from breathing problems and were double the weight of wildtype pups, with swelling throughout their bodies. The pups with seven deleted regions were still slightly larger than wildtype offspring, and died soon after being born, but two of the pups lived more than 48 hours.

“To derive an alive bipaternal mouse, we need to introduce no less than six deletions, which implied that compared to the bimaternal reproduction, more obstacles needed to be crossed,” Hu tells The Scientist.

Constructing embryos from same-sex parents using any of these strategies is inefficient. Only about 14 percent of attempts led to bimaternal embryos, while just 2.5 percent of tetraploid complementation attempts worked for bipaternal embryos with seven genes deleted.

“The most important part of this paper is that they managed to generate bipaternal embryos and let them develop to term,” says Yi Zhang, a biologist at Boston Children’s Hospital and Harvard Medical School who did not participate in the work. Yet, based on the efficiency issues, the short lifespan of the bipaternal pups, and the unknowns about the health of the mice with two moms, he cautions that the authors’ strategies are “still far away from real application” in people. 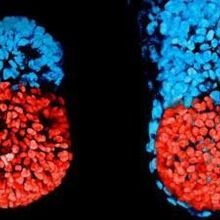 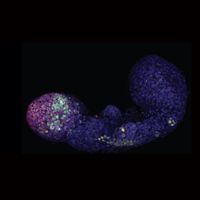