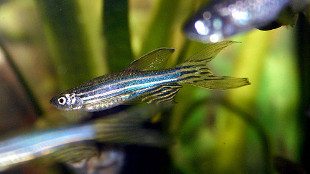 Zebrafish (Danio rerio) have two conserved genes encoding enzymes that can make gadusol, an antioxidant and ultraviolet (UV) light-protective compound previously thought to be acquired from food sources, according to a study published this week (May 12) in eLife.

Gadusol is made by bacteria and algae, and was previously found in cod roe, sponges, mantis shrimp eyes, and the eggs of brine shrimp and sea urchins. Scientists believed that these species gained the compound from symbiotic bacteria or from eating algae.

In the latest study, researchers from Oregon State University (OSU) discovered that zebrafish themselves had the two enzymes necessary to make the molecule. The genes encoding the enzymes are conserved in amphibians, reptiles, and birds, but not mammals or coelacanths, suggesting that they were present in a common ancestor but lost in certain lineages. Although the genes differ from those encoding gadusol-synthesizing enzymes...

The researchers also found that expressing the two zebrafish genes in yeast could produce gadusol, making it possible that the compound could be commercially produced for human use in topical or even oral treatments.

It is not known what other benefits the chemical may provide to the animals that produce it. “The ability to make gadusol . . . clearly has some evolutionary value to be found in so many species,” study coauthor Taifo Mahmud of OSU said in a statement. “We know it provides UV-B protection, it makes a pretty good sunscreen. But there may also be roles it plays as an antioxidant, in stress response, embryonic development and other functions.”