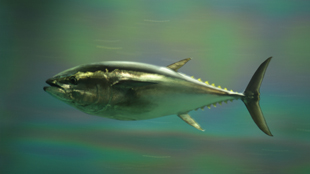 The Fukushima nuclear disaster following the tsunami in March 2011 was the largest accidental release of radioactive material into the ocean in history, and scientists are still quantifying the ecological fallout of the event. While most studies on the effects on marine wildlife have been conducted in Japan, a new experiment identifies radioactive elements in Pacific bluefin tuna off the coast of San Diego, California. The migratory tuna transported radioactive particles across the ocean in just 5 months, according to the study, published online today (May 28) in the Proceedings of the National Academy of Sciences.

But the findings are not necessarily bad: the levels of radioactivity in the fish are not high enough to be a health concern, the authors emphasized, and the radiation actually provides an unexpected tool to track the migration patterns of marine wildlife.

“It’s unequivocal that these fish,...

Daniel Madigan, a PhD candidate at Stanford University in California, has been sampling several species of fish off the San Diego coast every summer since 2008 as part of his dissertation work to trace the migration and ecology of marine species. One of his subjects is the Pacific bluefin tuna, which spawns in the western Pacific then swims across the ocean to the California coast to plump up on the rich food sources there.

The summer after the Fukushima disaster, Madigan decided to test the migratory tuna for levels of two radioactive isotopes released at Fukushima: cesium-134 (134Cs), which was not present in the ocean prior to the spill, and cesium-137 (137Cs), which exists in background levels in the ocean as a result of nuclear weapons testing.

Madigan collected 15 samples of bluefin tuna from fishermen in August 2011, and sent them off to Nicholas Fisher at Stony Brook University, who studies radioactive elements in marine species. “He said, ‘I doubt we’ll see anything. These fish live in the open ocean.’ I agreed, but we both thought it was worth a shot,” said Madigan.

The very first sample—and all 14 that followed—tested positive for 134Cs. “That’s inarguably from Fukushima,” said Madigan. “We were really amazed.” The samples also tested positive for elevated levels of 137Cs. As a control, the researchers tested bluefin tuna samples taken prior to 2011 and yellowfin tuna, which do not migrate to the western Pacific. None of the control fish contained 134Cs or elevated 137Cs, confirming that the 2011 bluefin radioactivity was indeed from the Fukushima fallout.

But bluefin tuna fish caught off the California coast are indeed safe to eat: the levels of radioactive cesium found in the tuna, between 5-10 becquerels (Bq), are far below the Japanese-set seafood safety limit of 100 Bq/kg, which was just reduced from 500 Bq/kg in April. And the levels are also lower than doses of naturally occurring isotopes in fish, such as radioactive potassium and polonium, said Buesseler.

And there is silver lining to the release of the radioactive cesium into the marine environment, said Madigan: it provides a useful tool to trace migration patterns of migratory marine wildlife. Because the fish carrying these particles were caught off the California coast in August 2011, it is clear that they traversed the Pacific Ocean in less than 5 months. Madigan plans to study the presence of the radioactive cesium in other migratory animals in the Pacific, including sharks, sea turtles, and sea birds. And since 134Cs and 137Cs decay at different rates, 2 and 30 years respectively, it is possible to get a rough estimate of timing of when an animal left the western Pacific. “It’s a new way to track migration,” said Buesseler. “It’s a good outcome of a bad accident.”

Madigan also plans to sample the bluefin tuna again this summer. “Levels this year could be higher or lower,” he said, as the fish may have spent more time in Japanese waters, building up radionuclides, or they may have had more time to excrete the radioactive cesium since the nuclear fallout. “We don’t know what we’re going to see this year,” said Madigan. “This is uncharted territory.”