In southwest Florida, toxic algae blooms have painted its normally bright blue coastal waters a rusty red. This so-called red tide has killed hordes of marine animals and is entering its 10th month of existence—making it one of the longest-lasting cases documented to date.

Red tides occur across the globe and are caused by a variety of algal species. The microorganism behind Florida’s outbreak is Karenia brevis, a marine dinoflagellate that releases brevetoxins, neurotoxic compounds that can be lethal to wildlife and cause neurological, respiratory, and gastrointestinal problems in humans. This year’s blooms have left hundreds of animals, including fish, turtles, and manatees, dead on the state’s shores.

The outbreak shows no signs of abating anytime soon. “We’re entering into what’s typically the bloom season,” says Marc Suddleson, the program manager for the National Oceanic and Atmospheric Association’s (NOAA) Harmful Algal Blooms Program. “[So] it’s possible that conditions will favor [its] persistence throughout the end of the summer into early fall.”

Although there have been significant advances in techniques to detect K. brevis and forecast its next appearance, effective means of control are still elusive, Suddleson tells The Scientist. “There’s really nothing yet we can put out in the water to stop the algae from blooming or stop it from being toxic.”

Researchers are currently investigating multiple ways to eliminate the harmful algae. One method involves dispersing clay particles over the surface of water—a technique that creates aggregates of algal cells that become too heavy to remain buoyant and sink. Scientists are also looking to identify marine viruses and parasites that can selectively kill K. brevis or other dinoflagellate algae.

While these approaches may be promising, Suddleson says, it remains difficult to identify a method that is both cost-effective enough to implement in a large area and safe enough to be sure no harm will be done to other marine organisms.

At Mote Marine Laboratory, a nonprofit research organization in Florida, scientists plan to start conducting field tests of a new system next week that will use ozone, a highly reactive molecule, to destroy K. brevis and its toxins. The trial, which involves injecting ozone into seawater, will take place in a closed region of a canal in Boca Grande, Florida, and to limit potential untoward effects on other marine organisms, “the water will be removed from the canals, processed in a tank on land, allowed to sit for a bit, then discharged back into the water,” Vince Lovko, a staff scientist at Mote, explains.

Mote researchers completed a successful trial run of the ozonation system in a 25,000-gallon pool this June.

Lovko and his colleagues at Mote have also been investigating other algae-busting techniques, such using filter-feeding organisms to gobble up algal cells. His team has also found evidence of compounds within macroalgae, or seaweed, that could be lethal to microalgae such as K. brevis.

Florida’s ongoing K. brevis outbreak is part of a global trend, says Pat Glibert, a phytoplankton ecologist at the University of Maryland’s Center for Environmental Science. “We see more red tides in more places, lasting longer and having greater impacts than in years past.”

According to Glibert, there are two key factors contributing to this worldwide shift: increasing nutrient run-off from farms, lawns, and other land-based sources, and changes in precipitation and storm patterns occurring as a result of climate change.

Lovko says that there is not yet enough data to definitively say that Florida’s red tides have been getting worse in recent years. Reports of possible red tides date back as far as the 16th century, and “as far as we know, it’s been part of this ecosystem for a very long time,’’ he adds.

In addition, a variety of factors—including water temperature and salinity, the movement of ocean currents, and K. brevis’s interactions with other marine organisms—can affect the algae’s growth, so the causes of this year’s long-lasting blooms are “difficult to pin down,” Lovko says.

Larry Brand, a marine biologist at the University of Miami, sees a clear link between the red tide and the concurrent outbreak of blue-green cyanobacteria in Florida. Those algae blooms originated in Lake Okeechobee, the state’s largest freshwater lake, where nutrients can seep in from agricultural and residential developments nearby. Water from the lake comes down the Caloosahatchee River into the coastal waters, Brand tells The Scientist. “So you're feeding these nutrients from land run-off into the red tide.”

While it is possible that land-derived nutrients flowing into freshwater bodies may be exacerbating the red tide, “there’s the question of how much of the nutrients make it to the coasts and not just the estuaries,” Lovko says. Suddleson adds that because K. brevis can obtain fuel from a range of natural sources, the relative contribution of nutrients from run-off remains an open question.

According to Brand, the best solution is to reduce the amount of nutrients entering the waters in the first place. “Anything you do to kill red tides you’ll kill other things as well,” he says.

But even reducing nutrient pollution will not have an immediate effect on a bloom the size of Florida’s current red tide, Glibert says. For an outbreak this size, “there's little that can be done to stop it once it starts.” 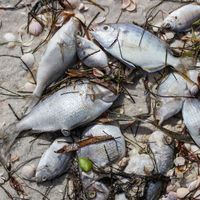 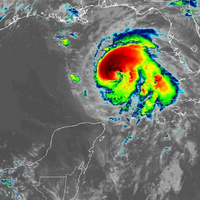