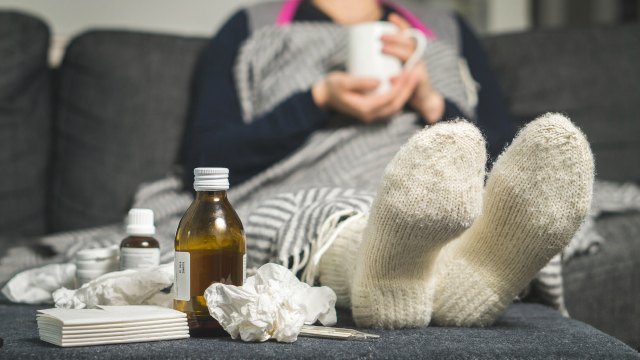 ISTOCK, TERO VESALAINENThanks to years of highly accurate flu forecasts, modelers have been able to tip off health advisors this year to an early peak in flu cases in the U.S. that may already be tapering off.

“Our early forecasts [in the fall] weren’t giving us much information on the timing or intensity of this season—they were just matching historic trends,” says epidemiologist and modeler Matthew Biggerstaff of the Influenza Division in the National Center for Immunization and Respiratory Diseases at the Centers for Disease Control and Prevention (CDC). “But by the middle of December, we had good signals for an early season and can safely say now that we’ve confirmed this season started early and peaked early.”

Forecasts are giving us an 80 percent chance that we will see the peak before the end of January.—Matthew Biggerstaff,
CDC

Usually, the peak in the number of flu...

While this week is “a little too soon to see if we are going to go down, forecasts are giving us an 80 percent chance that we will see the peak before the end of January,” says Biggerstaff. It’s possible the peak already occurred weeks ago, but it takes some time for the data on cases to be processed.

The CDC has about two dozen academic teams, including two international groups, that are together providing 30 different forecasts of the 2017-2018 flu season in the United States. CDC requests forecasters to provide predictions for the four weeks ahead of the most-recent week for which the agency has published its incidence numbers. The reality check on the accuracy of these forecasts is measured by comparing them to influenza-like illness reports made to the CDC from its network of 2,000 health providers. The CDC then estimates the average prevalence of flu in the different regions across the United States.

See “How Bad Will the Flu Season Get? Forecasters Are Competing to Figure it Out”

But getting those reports, especially when the peak flu season coincides with end-of-the-year holidays, can take time. “Providers may have been closed or behind because they did not have enough staff over the holidays, so we need to wait to see” how accurately the forecasts match intensity estimates, says Biggerstaff. The CDC will do a preliminary evaluation of this season’s forecasts in March or April and a final evaluation in July.

“It means that we won’t really know how good our forecasts have been until the end of the season,” explains Roni Rosenfeld, whose team at Carnegie Mellon University’s Delphi Group has for last three years most accurately predicted each flu season’s start, peak, and intensity. When The Scientist spoke with Rosenfeld near the beginning of the season, last November, he said the peak in severity would come around the second to fourth week in January. After modifying that to earlier in the season, his team is once again calling for those weeks in January to experience the peak.

This year, with the virulent strain of H3N2 flu dominating reports of illness, more deaths and hospitalizations from the flu are expected this year. This makes predictions during mid-season critical for health care providers to plan for flu cases. But whether or not this season will end early or gradually decrease over a longer period of time is still too early to tell, explains Rosenfeld.