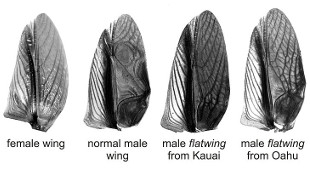 Teleogryllus oceanicus flatwing and wild-type wing morphsWIKIMEDIA, NATHAN BAILEYAs the sun sets over the grassy lawns that traverse the Hawaiian island of Kauai, the chirping crickets do not perform their usual dusk chorus. Instead, they are ominously quiet:  in Kauai and neighboring Oahu, field crickets (Teleogryllus oceanicus) have acquired a wing mutation that silences them. It also saves them from being eaten inside out while still alive.

The field crickets in Kauai offer a live demonstration evolution in action. In 1991, cricket numbers crashed as parasitoid flies (Ormia ochracea) located male calling crickets by sound and made them into live incubators for their eggs. The parasitic larvae would hatch and eat their cricket hosts from the inside out. Twelve years and 20 generations later, the cricket population bounced back, dominated by males with a wing mutation that rendered them silent. Male crickets on Oahu...

Sonia Pascoal from Scotland’s University of St Andrews and her colleagues sought to investigate how the mutation in the wing for silent males, called “flatwing,” might have spread from Kauai to Oahu. Two possibilities stood out: silent males may have hitched a ride from Kauai to Oahu, where the flatwing mutation took hold through a process called introgression, or the mutation evolved independently on each island.

“So far, they [silent and loud males] appear to be morphologically and behaviorally very similar; the key difference is in the wing morphology,” said St Andrews’s Nathan Bailey, an author on the paper, published today (May 29) in Current Biology.

The researchers found that the vein patterns in the wings of the silent crickets in Kauai were strikingly different from the patterns observed in Oahu. The Kauai flatwing mutants exhibited a more drastic loss of wing structures necessary for chirping.  Single nucleotide polymorphism analyses showed that each island had its own set of unique markers, with just a 0.3 percent overlap. At the same locus, different alleles were responsible for the flatwing mutation in the two islands. Both morphological and genetic analyses suggested that the flatwing mutation evolved independently in the two populations. 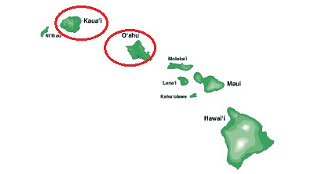 “The wing mutation may have knock-on effects . . . that cause other changes,” Bailey told The Scientist in an e-mail. “We are generating data examining this question, by looking at cuticular hydrocarbons and other traits.”

Of course, parasitoid flies are not the only ones who rely on chirps to locate male crickets—female crickets find mates through their calls. So how were the silent males managing to mate with females?

By exploiting wild-type, chirping males. The researchers found that the silent male crickets placed themselves less than a meter from a cricket song and accosted females as they made their way to the calling male. Female crickets on Kauai also seemed less choosy; usually, females choose a male by his courtship song, which silent males cannot provide.

Whether the silent bystanders are successful in getting free rides is something the group will work on next. “Our collaborators are currently comparing the fitness of the silent and loud males by analyzing patterns of mating in the field and in controlled laboratory trials,” said Bailey.

“I would predict that males in the affected populations would, in the near future, evolve to invest more in the other forms of sexual advertisement . . . instead of acoustic sexual signaling,” Raine Kortet from the University of Eastern Finland, who has worked on crickets from Hawaii but was not involved with this study, wrote in an e-mail. “It is already known that field crickets from the family Gryllidae use pheromonal cues in their mate choice.”

While they’re less likely to be found, silent males are not immune to attacks by parasitoid flies. Once, when Bailey and Pascoal were observing crickets from Kauai in he field, they saw “a mature larva writhed out of a flatwing male's abdomen before our very eyes,” said Bailey.

“I think these fascinating studies provide convincing evidence that the evolution of silent males has been favored by the presence of the acoustically orienting parasitic fly,” said Tom Tregenza from the University of Exeter, U.K., who was not involved in the study. “I suspect that there may be other examples of the same phenomenon waiting to be discovered. The difficulty is that you can’t listen for silent males.”