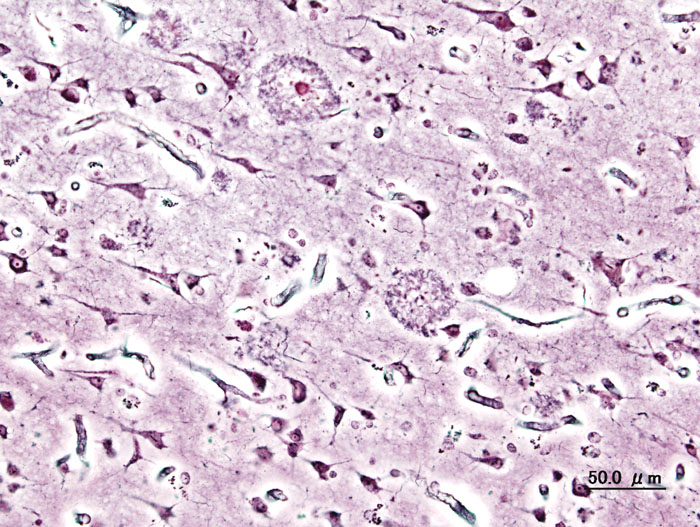 WIKIMEDIA, KGHAt the core of Alzheimer’s disease are amyloid-beta (Aβ) peptides, which self-assemble into protein fibrils that form telltale plaques in the brain. Now, the results of a study published today (January 4) in Nature suggest that certain fibril formations are more likely to appear in cases of rapidly progressive Alzheimer’s disease, as opposed to less-severe subtypes. The findings increase scientists’ understanding of the structure of these fibrils, and may eventually contribute to new tests and treatments for Alzheimer’s disease.

“It is generally believed that some form of the aggregated Aβ peptide leads to Alzheimer’s disease, and it’s conceivable that different fibril structures could lead to neurodegeneration with different degrees of aggressiveness,” said coauthor Robert Tycko, a principal investigator at the National Institute of Diabetes and Digestive Kidney Disease. “But the mechanism by which this happens is uncertain. Some structures may be more inert and benign. Others may...

Prior research has demonstrated that Aβ fibrils with various molecular structures exhibit different levels of toxicity in neuronal cell cultures, a finding confirmed in subsequent mouse trials. One study even demonstrated that Aβ fibrils cultured from patients with rapidly progressive Alzheimer’s disease are different in size and resistance to chemical denaturation than those isolated from patients with more slowly progressing disease. Building on these observations, Tycko and colleagues set out to better characterize the structures of these fibrils and get a better handle on the potential correlations between structure and disease subtype.

Tycko and colleagues examined 37 brain tissue samples from 18 deceased individuals—some with rapidly progressive Alzheimer’s disease and others who had experienced more common subtypes—with solid-state NMR spectroscopy. “This technique can be used to determine full molecular structure, but it’s also very sensitive, so you can tell from the solid-state spectra whether two fibrils are different or not, even if they differ very slightly,” Tycko said. “This is actually the first time solid-state NMR has been used to screen tissue samples for this purpose,” he added.

The process can be incredibly labor intensive, because solid-state NMR requires milligram-scale quantities of isotopically labeled fibrils. In order to prepare the samples, Tycko and his team had to amplify and label structures in brain tissue and generate “seeds”—short bits of fibrils—and grow them with synthetic peptides.

Coauthor Wei Qiang, an assistant professor of chemistry at Binghamton University in New York, explained the process. “You have to make individual samples for individual patients, one by one. It takes about half a year to one year of work. It’s not a high-throughput technique.”

Tycko noted that this is one of the reasons why the study featured a relatively small sample size. “The main barrier is that it’s not an easy thing to do and it takes a long time,” he said. “We were able to look at some 30 tissue samples, and that was really a tour de force.”

After examining the solid-state NMR spectra, the researchers found that one specific fibril structure appeared to be statistically correlated with both typical Alzheimer’s disease and posterior cortical atrophy Alzheimer’s—a condition that involves disruption of visual processing. The researchers also found that range of different fibril structures are statistically correlated with the rapidly progressive disease subtype.

“I think structure studies are fundamental work,” Wei said. “For example, if you want to quantify the Aβ peptide deposition in human brain, if you know the exact structure of the amyloid plaques, your biomarkers can be better designed.”

David Eisenberg, an amyloid expert at the University of California, Los Angeles, who was not involved in the study, agreed. “It’s a major discovery,” he said. “The work shows that distinct clinical presentations of the disease are associated with particular packings of the amyloid beta molecules in the fibrils.”

“It’s an important step towards that goal of being able to find a connection between particular diseases and molecular structure,” he added.

Tycko stressed that the study represents but a small step toward understanding the physical chemistry behind Alzheimer’s disease. “I want to be very cautious in talking about this work,” he said. “I wouldn’t want to extrapolate to say we could give advice to a patient based on the work in this paper. There are many other factors involved, and we performed our measurements on tissue obtained from autopsies, so it’s not a measurement that could be carried out on a living patient.”

“Our goal is not really to develop a diagnostic procedure for the clinic,” Tycko continued. “It’s to try to understand something fundamental about how the disease develops.”