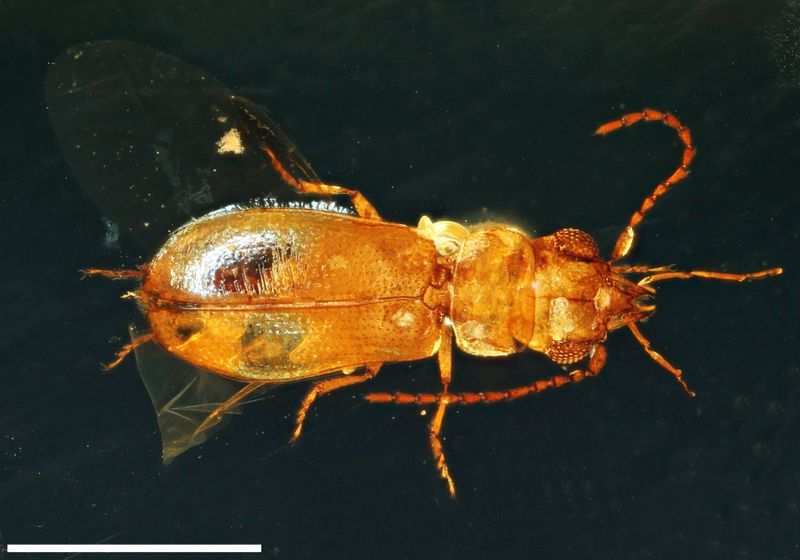 Most modern gymnosperms—conifers and gingkoes, for instance—rely on the wind to spread their pollen. For some gymnosperms called cycads, insects serve as their pollen shuttle service, and did so long before flowering plants needed bees and butterflies for pollination. The discovery, published today (August 16) in Current Biology, of a beetle fossilized in Burmese amber together with grains of cycad pollen reveals that the relationship between these plants and insects may have begun long before the 99-million-year-old fossil formed—at least 167 million years ago—the earliest evidence uncovered to date.

This amber fossil “almost captures behavior, and that’s really hard in the fossil record,” says Nathalie Nagalingum, a plant evolutionary biologist at the California Academy of Sciences who was not involved in the study. “It’s not exactly showing that the pollen grains...

Previous findings have shown that both beetles and cycads were around at least 250 million years ago, and may have been interacting even back then. But finding evidence of their partnership in fossils compressed in rock—the primary type of fossil available from earlier than about 120 million years ago—is tricky because of the lack of detail.

Study coauthor Chenyang Cai, a paleobiologist affiliated with the Nanjing Institute of Geology and Palaeontology in China and the University of Bristol in the UK, suspected that the group of beetles called boganiids he’d seen in stone fossils dating from about 160 million to 200 million years ago were candidates for pollinating ancient plants based on the shape of their large mandibles and because similar beetles pollinate modern cycads these days. So when his colleague and study coauthor Diying Huang of the Nanjing Institute of Geology and Palaeontology brought Cai a fossil of Burmese amber that Huang had purchased from Myanmar locals at the Chinese-Myanmar border that appeared to contain such a beetle, Cai was elated. The amber just might give him the detail he’d been searching for.

Cai cut and polished the specimen to get a closer look and realized that the 2-millimeter-long beetle had large mandibles and extremely long mouthparts called maxillary palps—features characteristic of pollinators. He also found that the amber contained clusters of pollen grains. In the study, the authors compare the beetle’s morphology to that of a modern cycad pollinator and classify the fossil as a boganiid beetle, which they named Cretoparacucujus cycadophilus. The three-dimensional features of the pollen grains appeared to be from cycads. Taken together, the preserved specimen points to a pollinator relationship dating back many millions of years.

“It’s a very interesting and intriguing paper,” says Conrad Labandeira, a paleobiologist at the Smithsonian Institution in Washington, DC, who did not participate in the study. “The authors did a pretty good job of looking at this specimen and putting it in its appropriate phylogenetic context and looking at the pollen and putting that into a phylogenetic context and then combining the two into an ecological relationship that goes all the way back to the early part of the Mesozoic [Era].”

Nagalingum cautions that these pollen grains are very difficult to ascribe to a particular plant group, and they could also have come from another ancient gymnosperm. “There’s just so much uncertainty associated with paleobotany” because complete plant fossils are so rare, she says.

Sarah Mathews, a botanist affiliated with the Australian National Herbarium in Canberra and Harvard University, agrees that the biggest open question is the pollen’s identity. It is a reasonable hypothesis that the pollen comes from cycads, she says, but “the clincher would have been, they have the beetles with the pollen grains [and] an actual pollen cone of a cycad.”

According to Mathews, it is possible that such a fossil exists and just hasn’t been found yet. “There’s much more out there to be discovered,” she says. “One of the reasons this is exciting is it gives us another hint of what the interactions between plants and insects actually were in a time that is very long ago.”