A study fails to detect ancient proteins among the microbes, adding to the debate about whether peptides can survive tens of millions of years underground.

Fossilized dinosaur bones host a diverse community of microbes but probably not ancient proteins, according to a study published last week (June 18) in eLife. The work, based on analyses of Cretaceous-age samples, supports the idea of fossilized bones as open systems that interact with the sediment around them and adds fuel to an ongoing debate about how long proteins and other biomolecules can resist degradation.

“It confirmed what I thought,” says David Martill, a paleobiologist at the University of Portsmouth in the UK who was not involved in the study. “Bones are such porous things. . . . They’re not a barrier to bacteria or fungi or any other microscopic organism—they’re open to being invaded.”

Some of the most widely publicized reports of ancient proteins have been based on...

While some researchers have praised the work, a number of paleobiologists who study the chemistry of protein degradation have questioned the claims, arguing that, even in conditions that favor preservation, peptides can’t survive intact in bone more than a few million years. These researchers have reinterpreted putative soft tissues and ancient proteins as biofilms made by invading microbes or the result of recent contamination in the lab or field.

To investigate whether Cretaceous bone might indeed preserve ancient proteins, paleontologist Evan Saitta, who recently completed his PhD at the University of Bristol, collected fresh fossil specimens from Dinosaur Provincial Park in Alberta, Canada. He took precautions to maintain an aseptic environment, he tells The Scientist, such as bleaching and blow-torching the excavation tools used at the site and wrapping the samples in sterilized foil.

Bones are such porous things. . . . They’re open to being invaded.

Labs at Princeton University and Bristol then ran a barrage of tests on the fossils, and also on control samples including mudstone from the collection site and bones from various modern animals. “We used half a dozen different techniques that give us information on anything from the structure of these ‘soft tissues’ in the [fossilized] bone, to their elemental analysis, to more detailed aspects of their chemistry,” Saitta says. “They fail to provide strong evidence, or really much evidence at all, for original proteins.”

The team did, however, find abundant evidence of microbes. “We used 16S rRNA gene sequencing to characterize the microbial community,” says study coauthor Renxing Liang, a postdoc in Tullis Onstott’s  geomicrobiology group at Princeton University. “Surprisingly, we found that the DNA yield in the bone was much higher—almost 50 times higher—than the adjacent mudstone. . . . It suggests that some sort of nutrients may be able to support the growth of microorganisms in the bone.”

Matthew Collins, a paleoproteomics researcher at the University of Cambridge who has discussed the project with Saitta and other coauthors but was not involved in the research, says he is “delighted” the work has been carried out. “They’ve applied a battery of different methods and come to the conclusion that, yes, there is definitely organic material in there, but the organic material they’ve found doesn’t point to being original protein from the fossil bone.” 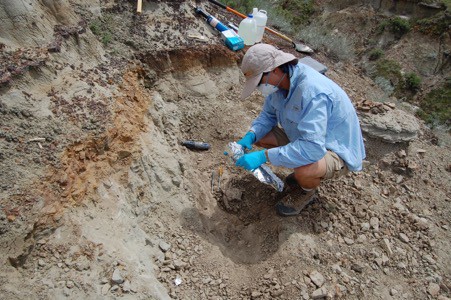 Collins notes that the team’s methods exclude some of the tools, such as antibodies, that are used by other groups to look for proteins in dinosaur bones. (The authors write in their paper that immunohistochemical methods can lead to false positives for some types of protein.) He adds that the absence of ancient proteins in one set of samples of course can’t rule out their presence in another.

Schweitzer, who has used antibodies along with other protein-detecting techniques, tells The Scientist that the new study “doesn’t refute what we did.” She says that the protein-detection methods used in the paper are less sensitive and less specific than the ones used by her team, and that the presence of microbes doesn’t negate the presence of endogenous biomolecules such as proteins.

“You don’t test scientifically a hypothesis erected by someone else unless you use their methods,” Schweitzer says. “When you put all of those things together, it’s not surprising that they don’t find what we find.”

Saitta, now a postdoc at the Field Museum in Chicago, says that he and his colleagues plan to further investigate the microbial communities living in fossils, and whether those communities differ depending on the environment in which a fossil is preserved.

The group’s work could help spur research into how microbes themselves influence fossilization and preservation, Martill says. “I’m sure that this study that these guys have done is going to be the basis for a much wider search for bacterial processes going on moderating and controlling the nature of fossils.”