Organic material taken from the fossilized remains of Dickinsonia—a group of organisms that died more than 541 million years ago—contains a combination of lipids characteristic of the animal kingdom. The finding, reported in Science today (September 20), establishes Dickinsonia as one of the earliest forms of macroscopic animal life to have evolved on Earth.

“I’m in awe of the work. It’s a fabulous study. The chemistry is robust. It’s an incredibly interesting observation,” says MIT geobiologist Roger Summons, who was not involved with the project but who has written about it in a review.

“This paper is a potential game changer, providing some degree of certainty . . . to suggest that animals evolved long before the Cambrian [period],” adds paleobiologist Philip Donoghue of Bristol University in the UK who also did not participate in the research.

While evidence of macroscopic life is also present in rocks formed during the Precambrian Ediacaran period (541 million to 571 million years ago), for many of these fossils classification to known kingdoms and phyla has been difficult. “The Ediacara biota, by and large, lacks characters that unite them with [particular] groups,” explains paleobiologist Doug Erwin of the Smithsonian Institution who was not involved in the research but who cowrote the review with Summons.

A prime example is a collection of Ediacaran fossils categorized as Dickinsonia. While the size and morphology of these organisms—which vary from one centimeter to longer than a meter and appear to be segmented—would suggest their placement in the animal kingdom, some researchers have proposed they might have been giant unicellular protists, some forms of which can reach up to 15 centimeters, says Jochen Brocks a paleobiogeochemist at the Australian National University of who led the research. Other scientists have even argued that Dickinsonia might have been some type of marine lichen.

I had to hire a Russian military helicopter to fly him there . . . and then he had to abseil from the cliff to get to the sandstone layer.

Were it not for some exceedingly well-preserved Dickinsonia fossils, found in the cliffs of the White Sea in Russia and now analyzed by Brocks and his team, it’s possible this classification debate would have persisted.

Dickinsonia and other Ediacara fossils are found all over the world, but in the majority of locations, the rock in which they reside has “been cooked,” says Brocks, meaning the preserved remains have been buried, heated, and compressed by tectonic activity such that “apart from the impression in the sandstone, there is nothing left of the fossil.”

In the White Sea cliffs, the sediments have escaped deep burial and geological baking. “The fossils there are so incredibly well preserved that Dickinsonia still consists of a film of organic matter,” says Brocks.

Restricted to just a few layers of rock on a very steep cliff, the fossils are not easy to get at, Brocks says. Luckily, his PhD student, Ilya Bobrovskiy, was up for the challenge. “I had to hire a Russian military helicopter to fly him there . . . and then he had to abseil from the cliff to get to the sandstone layer,” Brocks explains. 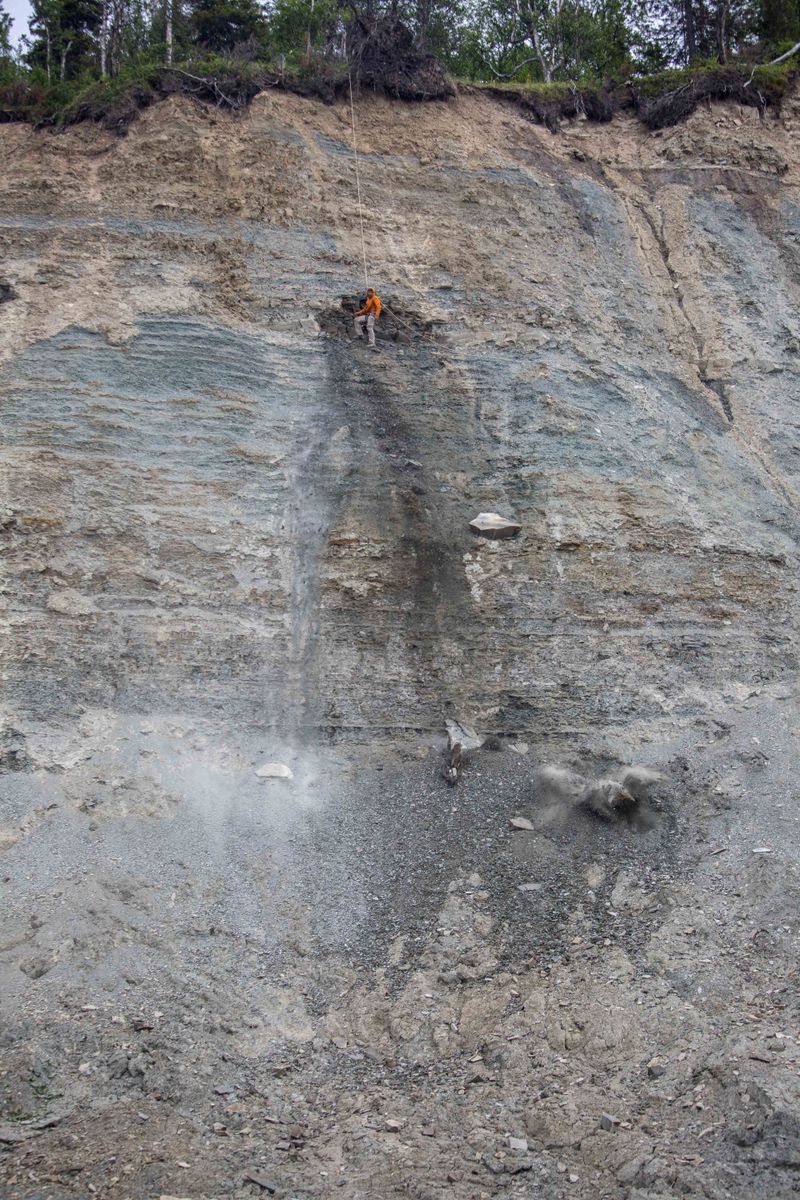 The really tricky bit, however, was avoiding contamination of the fossils. Immediately after Bobrovskiy had identified blocks of sandstone that contained Dickinsonia fossils, he had to reclose the rocks, wrap them in sterilized foil, and transport them back to the lab in Australia for examination under clean conditions.

The team removed fragments of organic material from both the fossils themselves and their immediate surroundings. The investigators then analyzed the samples using gas chromatography mass spectrometry to determine the presence and abundance of certain biomarkers—organic molecules that can retain information about their biological source for hundreds of millions of years. In this particular case they examined the composition of sterols—components of cell membranes.

“I expected a fairly subtle difference between Dickinsonia and the surrounding [area] because usually molecules can move, they can diffuse around rock surfaces,” says Brocks. “But . . . it was just black and white.”

That sort of result is a “scientist’s dream,” he says.

The findings may have finally resolved the Dickinsonia debate—“It’s closing the book,” says Erwin—but new debates will likely emerge because, as Erwin explains, “it still leaves open the issue of, What kind of animal was it? Where does it fall on the animal tree of life?”