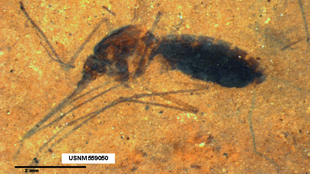 NATIONAL MUSEUM OF NATURAL HISTORY, DALE GREENWALTResearchers from the National Museum of Natural History (NMNH) in Washington, DC, have discovered the first ever fossilized blood meal, according to a paper published today (October 14) in Proceedings of the National Academy of Sciences. Large and labile molecules like DNA cannot be detected in fossils this old with current technology, but the 46-million-year-old mosquito holds clues about when blood-feeding behavior originated in insects and about the survival of other biomolecules like heme, which the researchers identified in the fossil.

“[The paper] shows that details of a blood sucking mosquito can be nicely preserved in a medium other than amber,” paleontologist George Poinar of Oregon State University, who was not involved in this research, wrote in an e-mail to The Scientist. “The paper also establishes that blood-filled mosquitoes were already active at that time, suggesting that they were around...

The paper is “powerful” evidence that certain molecules in blood persist longer than scientists might expect, said Mary Schweitzer, a paleontologist at North Carolina State University who was also not involved in the work.

The chances of finding a fossilized mosquito with evidence of a recent blood meal are infinitesimal. Paleobiologist Dale Greenwalt and his wife vacation in Glacier National Park each summer. When Greenwalt began volunteering for the NMNH’s paleobiology department several years ago, he learned about a site in Montana called the Kishenehn Formation, near the Flathead River on the western border of the park, that he said “may be one of the best sites for fossilized insects in the world.” For reasons that are still unclear, this site contains fossils of unrivaled quality, revealing ancient insects in great detail, including well-preserved scales, hairs, and structure-based color. Greenwalt collects roughly a thousand pieces of shale there every summer and adds them to the fossil collection at the NMNH. He then spends his winters in the NMNH’s lab cataloging and analyzing the fossils.

“When I’m going through all these fossils, there are some of them that are obviously of scientific value,” Greenwalt said. The mosquito’s darkened and enlarged abdomen and the morphology of the mosquito’s mouthparts immediately stood out to Greenwalt. “No one has ever found the fossil of a blood engorged mosquito,” he said.

The NMNH researchers measured the elemental content of the mosquito and found that its abdomen contained much more iron than its thorax and than the thorax and abdomen of a fossilized male mosquito from the same site—indicating it contained blood. The researchers also analyzed the fossil using mass spectrometry to show that the female mosquito abdomen, and not any of their controls, contained heme. “Everyone was jumping up and down, and we were all very excited,” said Greenwalt.

Schweitzer said the evidence of heme in the fossil was convincing, but added that looking for specific magnetic properties of heme-derived iron could further confirm the findings, as could the use of heme specific antibodies to verify heme’s presence in the abdomen. “I think this is a great first step,” she said, “but more can always be done.”

Going forward, Greenwalt hopes to investigate how this mosquito, other insects in the Kishenehn Formation, and the heme are so well preserved. The scientists are also intrigued by what the mosquito fed on. “We have no idea who the host was for the mosquito,” said Greenwalt. He added that living members of the same genus as the fossilized mosquito feed on birds and said that “we can conjecture that this was bird blood, but we have no way of proving it.”