ABOVE: Scientists report that tubular structures fossilized in black shale dating to 2.1 billion years ago were made by Earth’s first mobile organisms.
ABDERRAZAK EL ALBANI

In the country of Gabon on the west coast of Africa, researchers have uncovered 2.1-billion-year-old black shale that contains markings thought to be made by mobile organisms. Specifically, the rock contains fossils of tubular structures reminiscent of those created by marine organisms that tunnel into the sediment. The results, published this week (February 11) in PNAS, predate animal life and push back the date of the earliest-known mobile organisms by some 1.5 billion years.

“What matters here is their astonishing complexity and diversity in shape and size, and likely in terms of metabolic, developmental and behavioral patterns, including the just-discovered earliest evidence of motility, at least for certain among them,” coauthor Abderrazak El Albani of the University of Poitiers in France tells Reuters.

The dating of the fossils to 2.1 billion years ago coincides with higher oxygen levels in the atmosphere, which may have supported the evolution of these more-complex organisms. But some scientists question whether the tubular structures, which measure up to 17 cm long, are really evidence of mobility.

“I think the case for some biological connection is strong,” Graham Shields of University College London who did not participate in the study tells The Guardian, but rather than a single organism making its way through the rock, the tubes could have resulted from microbial mats or tube-like organisms called Grypania. “I don’t see much evidence for motility, [that is, willful] movement through a sediment in search of food, other than superficial resemblance to trails or burrows.” 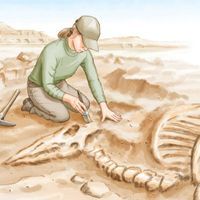 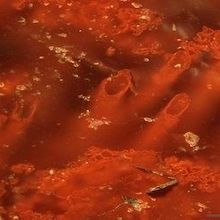