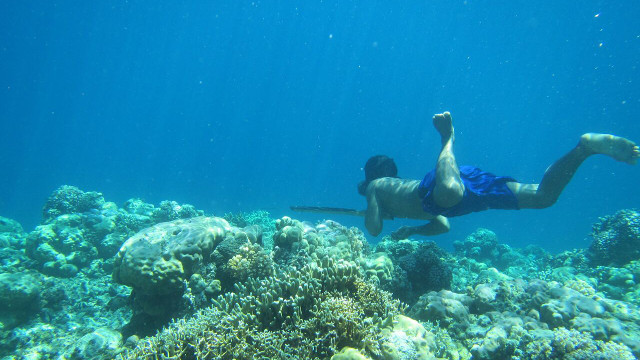 Bajau diver with a spearMELISSA, ILARDO, UNIVERSITY OF COPENHAGENResearchers have identified a genetic variant that likely results in larger spleens among the Bajau people in Southeast Asia, conferring better endurance for free diving in the ocean. The study, published today (April 19) in Cell, is an uncommon example of natural selection in modern humans that likely occurred on the order of hundreds or thousands of years.

“This is a fascinating example of how humans can, in a relatively short amount of time, adapt to a local environment,” says study coauthor Rasmus Nielsen of the University of California, Berkeley.

The Bajau people live in villages scattered throughout Southeast Asia, spending much of their day using traditional spears and other simple equipment to collect fish and shellfish by free diving—holding their breath. They have subsisted on this hunting method for more than 1,000 years.

The human body has...

Melissa Ilardo, who was a graduate student at the University of Copenhagen when she did the work, sought to understand whether the Bajau had evolved their own strategies to cope with hypoxia while swimming. She traveled to seaside villages in the Central Sulawesi peninsula near Indonesia, where both the Bajau and an unrelated population, the Saluan people, live, and recruited 43 Bajau and 33 Saluan individuals to participate. Ilardo measured their spleen sizes using an ultrasound machine and took saliva samples for genomic sequencing. She was interested in the spleen because the organ can be quite large in some diving marine mammals.

Prior to her travels, Ilardo spent months learning the Indonesian language, Bahasa Indonesia, which the Bajau people speak in addition to their native language, so that she could communicate with them directly, and convey to them the research findings. “I wanted to make sure that this was a cooperative effort,” says Ilardo.

Ilardo and her colleagues found that the spleens of the Bajau people were about 50 percent larger compared to the Saluans, even while taking into account individuals’ gender, age, weight, and height.

Next, the team compared the genomic sequences of Bajau and Saluan participants to those of the Han Chinese as a control, unrelated group. Scanning for variants, the group identified the top 25 polymorphisms that were unique to the Bajau genomes, suggesting natural selection pressures were at work. The study authors created a phylogenetic tree, calculating that the Bajau and Saluans diverged about 15,000 years ago, suggesting that the Bajau-unique genetic variants evolved some time after this divergence.

The Bajau village of Jaya BaktiMELISSA ILARDO, UNIVERSITY OF COPENHAGEN

“Analyses such as this help provide empirical evidence about the trajectory of natural selection in our species and the time frames of those processes,” Cynthia Beall, an anthropologist at Case Western Reserve University in Cleveland, who also did not participate in the work, writes in an email to The Scientist.

Among the top hits was a variant adjacent to the gene for PDE10A, a cyclic nucleotide phosphodiesterase involved in regulating smooth muscle contraction, including the muscles that surround the spleen. This genotype was previously tied to PDE10A expression in neuronal tissue and in the thyroid and was also linked with thyroid hormone levels. In mice, researchers have found that thyroid hormone levels affect spleen size.

“This work provides the first evidence for genetic adaptation in diving human populations and elucidates genetic pathways important in hypoxia tolerance,” Tatum Simonson, who studies the physiology and genetics of high-altitude adaptation at the University of California, San Diego Health Sciences, and was not involved in the work, writes in an email to The Scientist.

The team’s top hit, a variant adjacent to the BDKRB2 gene, is the only other gene that has previously been found to be associated with a human diving response, but not with spleen size. “We have no idea what it does to change the diving reflex. That is something we would like to explore next,” says Nielsen.

For Beall, there are many remaining questions from this study, including the agent of natural selection that resulted in the larger spleens as well as whether there are additional phenotypic differences between the Bajau people and non-diving groups.

Among populations living at high altitudes, who also have to cope with low oxygen levels, researchers have previously found different genetic adaptations that converge on the same phenotype, all in some way affecting red blood cell count, notes Theodore Schurr, an anthropological geneticist at the University of Pennsylvania who was not involved in the study. “This new study adds an increase in spleen volume as a novel adaptation through which people can conserve and utilize oxygen in the face of low oxygen, this time underwater,” says Schurr. “It would be interesting to compare lung volume and other phenotypes among diving populations and those living at high altitudes,” he adds.

According to Simonson, these results could also have implications for individuals with hypoxia-related conditions such as sleep apnea or cardiopulmonary disease, as they might lend insights into how genetic variation contributes to human hypoxia responses.