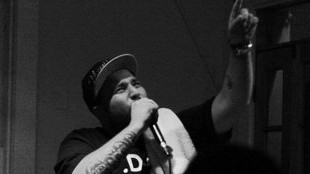 Wikimedia, Journalist1980Many people have had one of those inspired moments—the moment when suddenly the world goes mute and creative nectar pours out of one’s mind in an unobstructed deluge that soaks the blank paper, canvas, or instrument before you. If not, imagine the unbridled rhymes that burst from freestyle rap artists down at the intersection of poetry, music, and improv. That’s the common example of creative flow a group of neuroscientists recently chose to study, at least.

Researchers at the National Institutes of Health used functional magnetic resonance images (fMRI) to scan the brains of freestyle rappers as they wielded their lyrical skills. The images, which track blood through the brain, indicating which areas are active, could help neuroscientists better understand the wellspring of creativity.

“I think this idea of flow is really interesting,” says neurologist Psyche Loui of Harvard Medical School, who was not involved in the study....

To explore the roots of creativity, lead researcher Siyuan Liu, senior researcher Allen Braun, and colleagues at the NIH’s National Institute on Deafness and Other Communication Disorders convinced 12 rap artists to perform both freestyle and pre-written rhymes in an fMRI scanner. “It’s not a very natural environment,” recalls Braun, who previously conducted a similar study on jazz musicians during improvised performances. “But they did quiet well, and no one really complained.”

The resulting images, published in Scientific Reports last week (November 15), revealed that at the onset of freestyle rapping a distinct pattern emerges in the brain. The medial prefrontal cortex—the middle part of the frontal lobe—which corresponds to self-motivation and initiation, along with the motor and emotional regions were all more active during freestyle rap compared to rehearsed rap. “We think this freestyle improvisation could be linked to a big network, linking self motivation, initiation, language, motor and emotion together,” says Liu. The researchers also noted that the left hemisphere was relatively more active than the right at the beginning of creative flow.

But, when rappers neared the end of phrases and musical measures, they saw the right side become more active. “Why this is changing, we have no clear answer,” Liu notes, “but we think that it has something to do with how much their attention is changed at the end of the performance.”

The switch in brain activity from left to right was particularly interesting to Loui, who in her own work has seen increases in right hemisphere activity while people listen to music. “The old-school party lines are that speech and language are more left hemisphere and music is more right hemisphere. But, the real picture is more nuanced than that,” she says.

Overall, Liu and Braun think their data suggest that during bursts of artistic expression, the creativity network they identified becomes unfettered by self-consciousness and awareness, which will later staunch the flow as the performance comes to an end or pauses. But the creative channels are still muddy, says neuroscientist Timothy Verstynen of Carnegie Mellon University.

If you look at the areas of the brain that were more correlated with the freestyle rap versus the rehearsed lines, it’s a classic verb generation network, Verstynen explains. In past experiments, neuroscientist who asked subjects to think of verbs associated with a noun, like “dog’ and “walk,” or “beer” and “drink,” you get the same networks, he says. And because there are previous studies that found overlap in the circuits involved in language and music, it’s difficult to sort out what they’re doing and whether they’re involved in creativity and/or for the actual production of music or language, he adds. “We’re looking at correlational signals,” which, he says, is a common sticking point for studies that rely on fMRIs to show activity in the brain. “The common example I like to use is that when I go running, my arms move faster, but that doesn’t necessarily mean that that’s where running happens.”

But, he adds, the study builds an interesting new hypothesis and gives ideas of where to look for creativity networks. And, he adds, it asked a risky question: Is there a point source for creative floods from the brain?