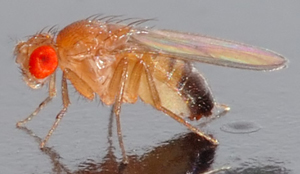 Organisms that live at the frigid poles of our planet have evolved strategies to withstand temperatures that would kill most species instantly. Some secrete ice-nucleating substances that control the freezing process, for example, while others accumulate anti-freeze proteins that allow their cells to remain unfrozen even at subzero temperatures, a phenomenon known as supercooling. Now, researchers in the Czech Republic have shown that some of these strategies can be conferred upon species that would otherwise succumb to the cold, like the temperate-adapted Drosophila melanogaster.

The results, published today (February 13) in the Proceedings of the National Academy of Sciences, could have implications for tissue storage and cyropreservation strategies for more complex organisms.

“It’s an amazing paper,” said Ben Philip, a physiologist ecologist at Rivier College in New Hampshire, who was not involved in the research. “We previously considered organisms to...

Previous work investigating chill-tolerant species had yielded a general aphorism: freezing survival is complicated. Attempts to take a cryoprotectant identified in one species, like an antifreeze proteins from the Atlantic wolffish, and express it in a freeze intolerant organism, like Drosophila, did not yield freeze-tolerant flies, for example.

But the new research suggests just two steps can achieve freeze tolerance in at least one species unaccustomed to super cold temperatures. Taking clues from the subarctic fly Chymomyza costata, which survives by precisely controlling ice crystal formation, Vladimír Koštál at the University of South Bohemia and colleagues have equipped Drosophila meglanogaster larvae with the ability to survive ice crystallization at -5° C for 30 minutes, then develop into healthy adults once warmer temperatures return.

Previous work by Koštál and his colleagues showed C. costata larvae could withstand dunking in liquid nitrogen by entering diapause—a hormonally regulated state that halts development. The researchers also observed that the amino acid proline acted as some sort of cryoprotectant, accumulating in cold-acclimated larvae, and artificially increasing proline via diet prior to inducing diapause helped more of them survived the liquid nitrogen dunk.

Koštál’s group wondered if C. costata’s strategies could enable the D. melanogaster larvae to withstand ice crystal formation and survive subzero temperatures. Originally hailing from the balmy tropics, D. melanogaster larvae are adapted for fast development in warm conditions, explained Koštál. The flies’ best defense against the cold is to supercool rather than freeze, allowing its cells to drop to -20° C before ice crystals begin to form. But once crystals do form, they are the kiss of death for the larvae.

Though D. melanogaster larvae can’t enter true diapause (“centrally controlled” by brain and hormonal changes), they can enter a similar state of quiescence under adverse conditions. Sure enough, when the researchers induced quiescence using a “fluctuating thermal regime” (cycling between 6° C and 11° C over 3 days), 6 percent of D. melanogaster larvae survived ice crystal formation at -5° C for 30 minutes, where as no larvae in an active state survived.

The simplicity of the strategy suggests it may be applicable as a method for the long-term frozen storage of insect lines, helping avoid the time and funds necessary for continued breeding of flies, Philip said.

Furthermore, understanding how these organisms withstand freezing could help researchers someday extend their strategies to other systems, said Koštál. Although current technologies permit cryopreservation of early embryos and individual mammalian cells, Koštál explained, preservation of whole tissues and organs is still just “wishful thinking.” But the fact that C. costata’s freeze-tolerant techniques can help D. melanogaster remain viable in subzero temperatures provides hope that the same strategies can be applied to complex tissues, he said.