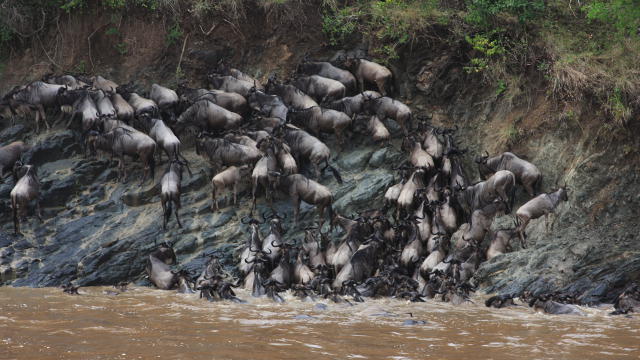 As they jockey for position to cross a crowded river, many wildebeest will drown and die.IMAGE: CHRISTOPHER DUTTONBefore the wildebeests of the Serengeti plunge into the rushing waters of Kenya’s Mara River to continue their annual migration across East Africa, they mill about on the bank, sometimes for days. One or two may nervously venture a drink from the crocodile-infested waters, but they’ll quickly scurry back, spreading anxiety to the herd, which can be 400,000 strong. It’s a dangerous crossing, and they know it. Eventually, though, one brave soul’s desperation for food trumps his fear, and he goes for it.

“They’re incredibly herd-oriented animals,” says Amanda Subalusky, an aquatic ecologist at the Cary Institute of Ecosystem Studies in Millbrook, New York. “So, when one decides to jump in, they all start to pour in after one another—which make for these really dramatic videos and photos.”

While many researchers follow the herd as they chase lush grasslands, Subalusky (then a Yale University PhD student) and colleagues from Yale, including her husband, Christopher Dutton, and ecologist David Post, head in another direction: down the river and after the carcasses. For the last six years, the team has been studying these mass drownings and their impact on the Mara River.

The researchers put the total number of carcasses at more than 6,000 from roughly three to four mass drownings a year (PNAS, doi:10.1073, 2017). They make up a large chunk of the river’s nutrients, providing more than 1,100 tons of biomass every year. That’s equal to about 10 blue whale carcasses for the fish, marabou storks, crocodiles, and other scavengers to consume.

To document the fate of the carcasses and model the nutrients they release, the team, escorted by rangers from the Mara Conservancy, cautiously moved down the bank, counting dead wildebeests, grabbing tissue and bone, sampling water, and scraping biofilm samples from the surfaces of submerged bones, along a 22-mile stretch of river. Cameras captured scavengers feasting on the fallen.

After about 10 minutes of treading, some wildebeests drown, their lifeless bodies whisked downstream with 100 or even 1,000 of their hapless herdmates.

For about a month, river dwellers gobbled up all the soft tissue, often transporting nutrients back onto the terrestrial landscape. In the water, resident fish, like the African catfish, took their turn, obtaining up to 50 percent of their diet from carcasses during this period. Eventually, the wildebeest bones, which take can take seven years to decompose, sank to the bottom of the river, acting as nutrient sources slowly fertilizing the river and accumulating coverings of microbial biofilm for aquatic life to feed on. Overall, the team calculates, 107 tons of carbon, 25 tons of nitrogen, and 13 tons of phosphorous get deposited into the river every year, thanks to the wildebeest migration.

“This is starting to answer some important questions about how different types of ecosystems are linked through space and through time,” says Samuel Fey, an ecologist at Yale who studies mass mortalities. “It raises the interesting point: the potential loss of large terrestrial animals can reshape their surrounding ecosystems, although that impact may not be felt immediately.”

Grant Hopcraft, a landscape ecologist at the University of Glasgow, agrees: “That’s important, because you end up with this lasting effect on the system. It’s not just a single pulse that’s over in 10 minutes.”

Hopcraft knows the wildebeests well. He tracks them with GPS transmitters (about 70 tagged so far) to better understand their movement and how they navigate in the ecosystem given the availability of resources and the dynamic nature of the cyclical dry/rainy seasons. That such a big impact played out in the river didn’t surprise him because of what’s happening on land.

“If every wildebeest was a penny, and you stacked the pennies, it would be two kilometers high,” he says. “And those pennies are going to eat 4,000 to 5,000 tons of grass every day. That’s an enormous amount of biomass being consumed, digested, and redeposited in some way. If you look at the nutrient cycles on soil, it’s pretty much driven by the migration every year. If you look at the insects, or the birds, the plants, it’s the same thing.”

A similar phenomenon occurs in the US Pacific Northwest every year when millions of Pacific salmon swim up the rivers from the ocean to spawn and die, supplying rich nutrients to ecosystems. There are differences, though.

The mean biomass of the wildebeest drownings is about 3.5 times higher than what the salmon in a British Columbia watershed provide to the local mammals and birds (Oikos, 118:1307-18, 2009). And while the wildebeest can complete its life cycle without drowning, death is the natural conclusion of the salmon’s reproductive course, says Jessica Miller, an aquatic ecologist at Oregon State University. “One is more obligatory than the other; and the other is more facultative,” she says. “But both are useful to the system.”

The massive great whale carcasses are another example of the far-reaching impact a migration once had on ecosystems. For hundreds of years, before commercial whaling decimated populations of several whale species, tens of millions of the massive cetaceans swam from one hemisphere to another in the longest migration on Earth, providing up to 90 percent of all ocean biomass (Front Ecol Environ, doi:10.1890/130220, 2014). Just one carcass can feed 60 species as it sinks to the ocean floor, where it can sit for decades.

“If every wildebeest was a penny, and you stacked the pennies, it would be two kilometers high. And those pennies are going to eat 4,000 to 5,000 tons of grass every day. That’s an enormous amount of biomass being consumed, digested, and redeposited in some way.” —Grant Hopcraft,
University of Glasgow

“That’s what we’re really trying to get a handle on . . . to get an idea of what the role of the whales would have been ecologically before we started whaling,” says Joe Roman, a conservation ecologist at the University of Vermont and coauthor on the whale carcass study. He’s also looking ahead, as whale populations rise, and the ecological pendulum swings the other way. “We see the numbers are changing, and we think that’s going to change the ecology of the ocean,” he says.

The wildebeest migration, the largest remaining mammalian land migration in the world, has been steady at around 1.2 million per year since the 1970s, but threats to the population—and to the Mara River—are mounting.

“We can’t say for certain what happens to rivers when migration stops,” Subalusky says. “But a lot of migrations have been decimated or disappeared, and in some places, you can see the effects of the loss of the migration.”

In the western United States, almost 30 million bison migrated regularly in the early 1800s. Records show mass drownings were a regular occurrence, she says. The loss of these events may have fundamentally altered how river ecosystems function now compared to the past.

“Interestingly, [life in] many of those rivers is largely limited by low levels of phosphorus,” says Subalusky, who recently returned to Kenya with Dutton and their two-year-old daughter for a five-month field stint. “Perhaps that’s the result of [the cessation of] these large drownings and the bone bed that would have been provided by them.”

The biggest danger to the wildebeest migration is, by far, poaching. Between 60,000 and 110,000 wildebeests are hunted for their meat, horns, or hides every year. A proposed dam for hydropower, climate change, and illegal harvesting of the wooded highlands also threaten the river flow—and thus the ecosystem dynamics of the migration.

“It’s an example of how complex these kinds of large ecosystems are and how it can be easy to underestimate the impacts that animal migrations can have on ecosystems,” Subalusky says, “and therefore the ecosystem functions that may be lost when those migrations are lost.”