Evolution is generally thought to move slowly, punctuated only by significant ecological disturbances like pollution or habitat destruction. But a study published today (March 17) in Science finds that evolution may in fact happen fast enough to enable adaptation to seasonal changes that happen each year—at least in fruit flies (Drosophila melanogaster).

“The pace and magnitude of these changes is unprecedented,” study coauthor Paul Schmidt, an evolutionary biologist at the University of Pennsylvania, tells The Scientist. “The pace of evolution was incredibly surprising. It’s super fast.”

Fruit flies are already known to evolve at a speedy pace. In laboratory studies, the insects evolve resistance to stressors like dry environments and cold temperatures within 8 to 9 generations. In contrast, the new study documented changes in flies’ physical characteristics on shorter timescales—within three to four generations, each of which can last a month or more. Previous studies also looked at smaller populations of flies, on the order of 2,000 to 3,000 individuals, while this study had a much larger sample size. At the study’s peak, the number of flies in the experiment reached 100,000.

This study builds on the group’s previous field experiments, in which they found that the physical characteristics of fruit flies—from dehydration tolerance to coloration—change dramatically over the course of a year. But the researchers couldn’t discount the possibility that outside fly populations had moved into the area in between samplings, causing the observed changes. So for the new study, Schmidt and his colleagues decided to build a large, quasi-outdoor structure to simulate conditions in the field as closely as possible while still controlling for what came in and out.

The team built ten outdoor mesh cages, each containing a fruit tree. Within the cages, the flies experienced rain, chill, and sunshine. Inside each cage, the researchers controlled the food the flies ate, the microbes they were exposed to, and their predators and parasites. At the start of the experiment, they seeded the cages with 1,000 flies each, which were descendants of a population originally sourced in Pennsylvania. 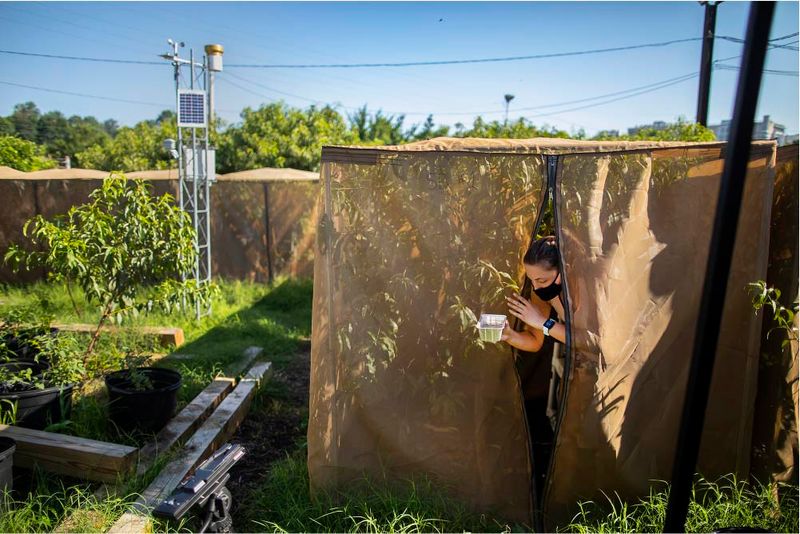 The study measured how six different physical traits associated with survival, such as desiccation tolerance and fecundity, changed across four experimental time points by sampling 2,500 eggs from each cage at one, two, three, and four months after the start of the experiment. They hatched these eggs and assessed the flies’ physical traits. Due to the short lifespan of flies, each timepoint corresponded to about four generations.

The researchers also measured how the genetic makeup of the flies changed across the four time points. At each point, they sampled 100 fruit flies from each of the cages, reared them for three generations to eliminate any changes that could be passed down through epigenetics, and performed pooled whole-genome sequencing to test which alleles were most prevalent. The researchers looked at the parallel response across all cages at each timepoint to “define the unified response” to seasonal changes in environmental conditions, says Schmidt.

The researchers compared the rate at which the physical traits of the flies changed to a meta-analysis of field studies that surveyed phenotypic change over time in fewer than 200 generations. They found that some physical traits evolved faster than what had been observed in previous studies cited in the meta-analysis, while others evolved at a comparable rate.

Throughout the experiment, some physical traits and alleles altered in one direction just to reverse course as conditions changed. Other traits only changed in one direction throughout the whole experiment. The scientists say that previous studies may have looked at timepoints that are too far apart to capture these oscillations, and may have therefore underestimated the rate of adaptation.

The researchers saw changes in allele frequencies at 60 percent of the genetic sites they analyzed, but they say many of these changes are due to genetic hitchhiking, where changes in one gene cause alterations elsewhere in the genome. Through further analyses, they identified 165 regions of the genome that are sensitive to selective pressure independent of one another.

Phenotypic traits that appeared unrelated, such as starvation tolerance and egg size, evolved rapidly in parallel, leading the researchers to conclude that the regions of the genome under the steepest selection pressure were high-level signaling pathways or regulatory elements that controlled multiple traits at once.

Joseph Graves, an evolutionary biologist at North Carolina Agricultural and Technical State University who was not involved in the work but spent the early part of his career studying fruit fly evolution, tells The Scientist that “it was a good study. And it was a tremendous amount of work.” He wasn’t surprised by the results, however.

“It’s a large scale experiment that tests in a quasi-naturalistic setting things that had already been established about experimental evolution in Drosophila, beginning in the late 1980s through the 1990s,” says Graves, referring to more than a half dozen papers by himself and others reporting that, in laboratory environments, Drosophila rapidly evolve resistance to desiccation, starvation, and other stressors in parallel.

Schmidt says that the goal of studies like this one that simulate natural environments is to understand how species adapt to global changes, particularly those due to climate change, and aid conservation efforts. He says it’s possible that the sort of rapid adaptive changes observed in the new study are happening in other species, even humans. “The appropriate timescale for this to operate in humans might be on the order of 400 years. . . . But it’s an open question . . . whether fluctuating selection pressures [happen] over these timescales,” says Schmidt.

Ecological systems are changing very rapidly due to climate change, Schmidt says, and “if ecological change is happening really rapidly and evolution is viewed as a very slow, gradual process, the two will never meet . . . What we’re showing here is that the evolution is acting so fast that ecology and evolution are operating at the same timescale.”

Therese Markow, an emeritus evolutionary biologist at the University of California, San Diego, who did not participate in the work, tells The Scientist that “I think that the data are very strong.”

Graves has similar reservations. “When you get to a population size of 100,000, which is one of the good things about their study, you have much more standing genetic variation to work with, and hence a greater capacity to respond to environmental changes,” he says. “When you’re dealing with conservation issues, that’s not the case.”

“We’ve shown that this phenomenon [of rapid evolution] actually does operate in the natural world in the field” says Schmidt. “The challenge is, for other people and hopefully us too, to ask, ‘How general is this phenomenon?’”