Researchers show that Drosophila melanogaster males are capable of producing more modes of courtship song with their wings than previously thought.

To convince female Drosophila melanogaster flies to mate, males sing—that is, they vibrate their wings to serenade females. In more than 50 years of studying these songs, scientists thought there were only two song modes, known as pulse and sine. But in a study published today (July 26) in Current Biology, researchers found that there are actually two different types of pulse songs, lengthening the set list to three and paving the way for a greater understanding of how the brain generates behavior.

“The beauty of the paper is that it demonstrates the hidden complexity in these fruit fly songs,” says David Stern, a biologist at the Howard Hughes Medical Institute’s Janelia Research Campus who did not participate in the work. “Even what we thought was one song type hides really interesting variation, and this is a beautiful quantitative description of that underlying complexity that most...

We even showed that the way in which males produce these three modes utilizes different wing positions.

In a 2014 Nature study, Princeton biologist Mala Murthy and colleagues used computational models to predict which song male flies would produce based on sensory cues they received during courtship. The researchers’ models accounted for much of the variability in the males’ choice of song modes, but not all of it. Murthy says that one reason the models didn’t account for all the variability could be that they were missing information about the song itself.

“We knew that other [Drosophila] species—including very close relatives of melanogaster—produce more than one pulse type, so we wondered [whether] melanogaster itself only produces one type of pulse song,” says Jan Clemens, a coauthor on both the 2014 and current papers and a former postdoc in Murthy’s lab who now leads a group at the European Neuroscience Institute in Göttingen, Germany.

To investigate the song modes in D. melanogaster, Murthy, Clemens, and their colleagues analyzed a dataset containing more than 20,000 sounds—songs plus grooming, jumping, and other noises—made by 47 male flies. The researchers used an unsupervised method, one that looks for patterns in the data without presupposing anything about those patterns. They found evidence for the sine mode and for two pulse modes: slow, which has symmetrical waveforms, and fast, characterized by quicker, asymmetric oscillations.

“It was clear that there was this additional mode we’d missed—three modes of song instead of two,” Murthy tells The Scientist. “We even showed that the way in which males produce these three modes utilizes different wing positions. In other words, this additional mode was not just an artifact of our analysis, but a distinct signal produced by the male fly.” 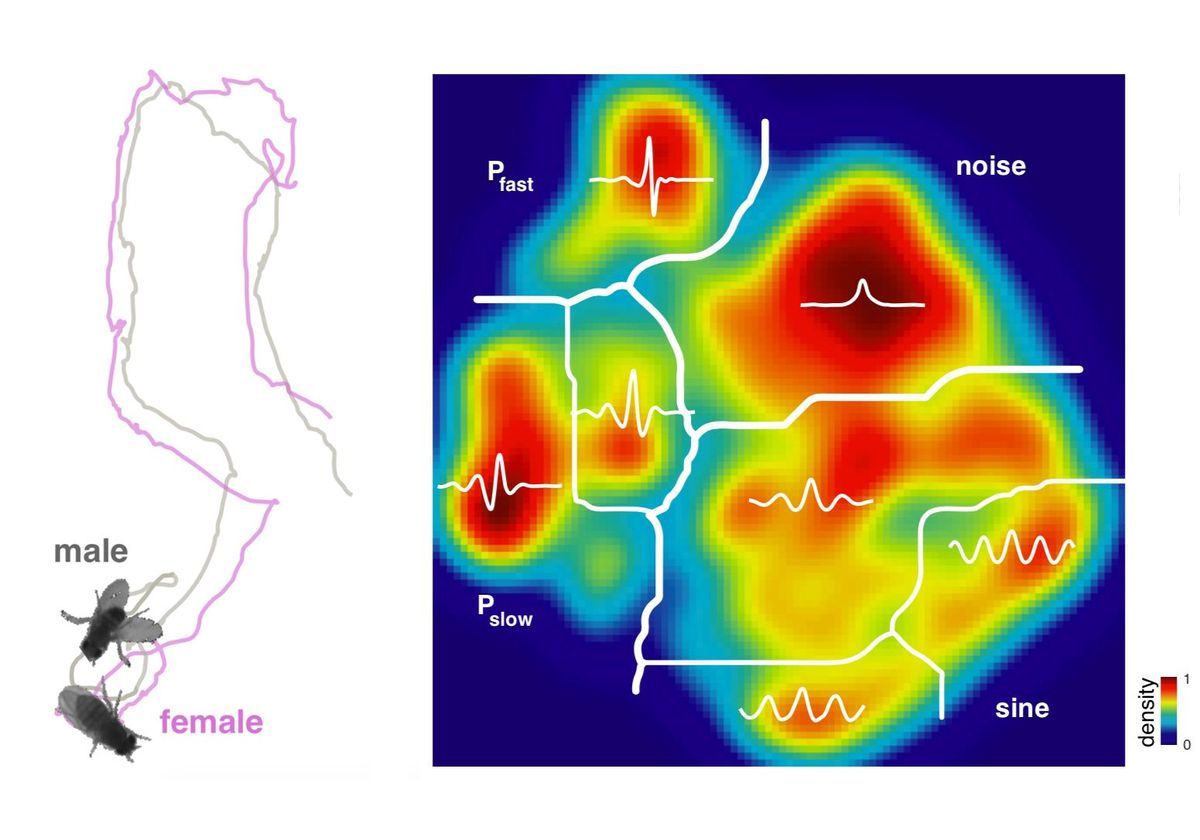 The authors also found that visual cues, specifically, the distance from female flies, seemed to influence which pulse mode the males produced. And by activating neurons in the males’ brains, Murthy’s group identified four neuron types that appear to be involved in song choice. Finally, the team showed that female flies seem to change their speed and willingness to mate depending on male song modes, suggesting that females are able to distinguish between the different signals.

“What this shows is that the song that these flies are singing is a lot more nuanced and complex than we had previously thought,” says Troy Shirangi, a biologist at Villanova University who did not participate in the work. “By having such a higher-resolution understanding of the behavior, it allows us to make connections between patterns of neuronal activity in the brain [and] the generation of behavior.”

For Azusa Kamikouchi, a biologist at Nagoya University in Japan who was not involved in the study, the most interesting future directions focus on these brain-behavior connections. “Female melanogaster respond differently to each type of pulse song, but we don’t know the mechanism the auditory neurons [used] to discriminate two pulse songs,” she says. Another “open question is how the visual system interacts with the song production pathway in males.”

“Using real-time sensory feedback to change behavior is what all animals do all the time,” says Murthy. For instance, when you speak to someone in person, you use feedback signals—such as facial expression—to respond and possibly change what you’re saying, she explains. “But we don’t really have good model systems in which to figure out how the nervous system does that. Our system is ideal for solving those problems, so having a better handle on the behavior now allows us to go back and figure this out.”