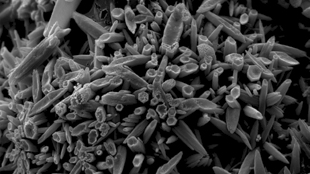 Lead can be converted into pyromorphite, the most stable mineral form of the metal, by some fungi species, according to a study published online this week (January 12) in Current Biology. The findings add to work highlighting the important role of microbes in geological processes and suggest a possible avenue for bioremediation of lead polluted soils.

“This is the first example of fungi acting to mineralize lead,” said Silvia Perotto, a plant biologist at the University of Torino, who did not participate in the study.

It’s common knowledge that lead is extremely toxic. Implicated most famously in neurodevelopmental problems in early childhood, the metal has been phased out of products such as household paint. But there are still sources of lead contamination, such as mining operations and shooting ranges, where bullets can...

Air, moisture, and pH exposure can produce oxides and salts of lead. Remediation strategies for lead-contaminated soil have focused on converting it to the most stable form, pyromorphite (also known as lead chlorophospate). Fungi are known to detoxify other toxic compounds such as uranium by converting them into mineral forms, so Geoff Gadd of the University of Dundee in Scotland reasoned they might be able to do the same for lead.

Gadd’s group took samples of several fungi species from a defunct lead mining operation in Wales. After scattering lead shot (ammunition used in shotguns) over agar media in Petri dishes, they introduced the fungi to some dishes, and allowed them to grow for several months.

Analyzing the element composition and mineral structure of the compounds deposited on the lead, the researchers found that lead incubated with certain species of fungi showed much higher levels of pyromorphite than lead left in sterile dishes, suggesting the fungi are indeed detoxifying the metal.

Gadd thinks the fungi’s ability to solubilize elements could inform remediation strategies, which currently fail to remove all lead from contaminated soil. “We kept asking ourselves how to get above 30 percent [pyromorphite yield],” said Joselito Auroceno, a minerologist at the University of North British Columbia who was not involved in the work.

Lead-mineralizing fungi might be a future bioremediation strategy, agreed environmental engineer Robin Brigmon of Savannah River National Laboratory in South Carolina, who was not involved in the study, but first the work needs to be repeated outside the lab. “Bioremediation is a black box,” he explained, and getting key pieces of evidence, like how fungi are involved, can help scientists design long-term strategies for land usage of contaminated sites.