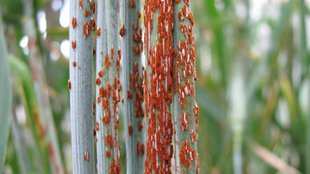 Stem rust fungus on wheatEVANS LAGUDAH, ZAKKIE PRETORIUSA recently emerged strain of the wheat-destroying fungus called stem rust is threatening 90 percent of the world’s domestic wheat varieties. But, according to two papers published online today (June 27) in Science, this fungal threat may soon be thwarted thanks to genes from hardy wheat relatives that resist the fungus.

“These are the first genes cloned that resist the Ug99 stem rust race that is threatening wheat crops worldwide,” said Bikram Gill, director of the Wheat Genetics Resource Center at Kansas State University in Manhattan, who was not involved in the research, “so it’s very exciting news.”

Domestic wheat varieties such as those made into bread and pasta provide a staggering 20 percent of the global populations’ calorie intake. But wheat has an enemy in the form of an orangey-red fungus that grows on its stems, ultimately killing...

In Uganda in 1999, however, stem rust upped the ante. A new strain, or race, of the fungus emerged that had overcome the resistance and quickly began destroying large expanses of domestic crops. Furthermore, subsequent testing of assorted domestic wheat varieties revealed that 90 percent of them were susceptible to the new race, called Ug99.

“The major fear people have is that the disease spread is extremely rapid,” said Simon Kittenger, a botanist at the University of Zurich, in Switzerland, who also did not participate in the research. “It is now present in all of East Africa and South Africa, and has even spread into Yemen and Iran.” If it spreads any further East, it could impact the world’s two major wheat-producing countries, India and China—“the bread baskets of the world,” as Kittenger referred to them. “It could potentially be a disaster,” he said.

Although the existence of Sr33 and Sr35 genes was known, their precise locations in the plants’ genomes, as well as their identities, remained a mystery. The teams performed genetic mapping and DNA fingerprinting to narrow their searches to a few candidate genes, then pinpointed the precise genes by introducing mutations and seeing which ones caused a loss of Ug99 resistance.

A gene called AetRGA1e in the A. tauschii genome turned out to be the gene scientists had been calling Sr33, while the gene CNL9 from T. monococcum was identified as Sr35. When each of these genes was transferred into Ug99-susceptible wheat hosts, they conferred Ug99-resistance.

The two genes vary somewhat in the resistance they provide. CNL9 confers almost complete immunity to Ug99 and related races, but is susceptible to other forms of stem rust, while AetRGA1e is resistant to all races of stem rust tested so far, but in the case of Ug99 confers only moderate resistance. For that reason, Lagudah says the best plan to protect domestic wheat would be to combine the two genes in a single plant. “We need to be one step ahead of the fungus, because eventually it will mutate and overcome resistance,” he said.

The quickest and easiest way to get both genes into a single wheat variety would be to use transgenic techniques, said Akhunov, while acknowledging the political controversy surrounding genetically modified crops. “We could transfer these genes into wheat using classical approaches, we can cross and select plants with the gene, but it takes a lot of time. It may take up to 5 to 7 years just to develop this plant.” This could be a risky delay if the disease is spreading as fast as Kittenger reckoned. Creating the plant by transgenics, on the other hand, would take approximately 6 months, Akhunov said.

The other thing to bear in mind, said Akhunov, is that “the pathogen races are evolving very fast.” Since the discovery of Ug99, another five or six derivative races have emerged, he said. So not only must the search for new resistance genes continue, he said, but also “we need to come up with faster ways of responding.”