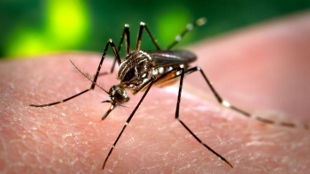 The fungus Beauveria bassiana effectively kills Aedes aegypti, the mosquito responsible for carrying dengue, and sharply reduces the rate at which mosquitoes seek human targets, according to a study published earlier this month in The American Journal of Tropical Medicine and Hygiene. The results offer a potential alternative to pesticides to control the mosquito-borne viral disease.

“I think it’s encouraging. The experiments they did are consistent with the fact that [the fungus] could affect aegypti in ways that could prevent dengue transmission,” said Tom Scott of the University of California, Davis, who did not participate in the study.

Dengue is a viral disease transmitted by mosquitoes that infects between 50 and 100 million people annually, according to the World Health Organization. Current control mechanisms rely heavily on insecticides, but recent reports of mosquitoes acquiring insecticide-resistance in Mexico have...

So scientists have been turning to the fungus B. bassiana in hopes of identifying a new way to control dengue spread. The fungus, which grows naturally in soil and is an insect parasite, is currently used to control a number of agricultural pests, and recent studies have shown it may also kill dengue-carrying mosquitoes. But so far, there has only been one field study of the fungus on dengue-carrying mosquitoes, so questions remain about its effectiveness in the wild where temperature and humidity variations may affect mosquito survival.

In the new study, Jonathan Darbro of the Queensland Institute of Medical Research in Brisbane, Australia, and his colleagues tested the fungus under laboratory and “semi-field” conditions in which the mosquitoes were housed in large cages in an area in Australia where dengue is endemic.  In the lab trials, fungal-infected mosquitoes were 30 percent less likely to bite humans than controls and laid fewer eggs over their lifetime, similar to previous lab findings with other disease-carrying mosquitoes and other fungi. And in both the lab and semi-field trials, the fungus reduced the mortality rate of infected mosquitoes—by 88 percent in the lab and between 59 and 95 percent in the field.

“This has been an important step towards confirming what we see in the laboratory, we also see in the field,” said Darbro, noting that the fungus killed mosquitoes “equally well” in both lab and semi-field conditions, albeit more variably in the latter.

“I think the fact that they have used this semi-field condition is important,” agreed Adriana Costero of the National Institute of Allergy and Infectious Diseases, who was not involved in the study. “This paper adds another bit of knowledge that we need to know before we can determine if this is a feasible approach for large scale control.”

If it works, the fungal technique has the advantage of  using inherent resistance management, said Darbro, meaning that mosquitoes are unlikely to evolve a defense against it. “The fungus kills the pathogen before the pathogen can become infective, but slow enough so the mosquito can reproduce,” he explained. This allows both fungus-susceptible and fungus-resistant mosquitoes to pass on offspring to the next generation. “That means that natural selection is not pushing as hard for the mosquitoes to resist the fungus as they would for a chemical insecticide,” Darbro said.

He acknowledges that when it comes to Aedes aegypti and dengue fever, this idea is hypothetical. The fungus is found in nature, said Darbro, and is used to control agricultural pests. But to control dengue, it would be used in areas near where people live. Thus, Costero cautioned, it’s important to make sure that humans aren’t harmed by the fungus.

But Darbro isn’t worried. While a small number of people, often with weakened immune systems, has been infected by the fungus, he said, they’ve always been successfully treated.

Another hurdle to be overcome is developing a way successfully to infect the mosquitoes with the fungus. “That’s the million dollar question,” said Darbro. “The challenge is finding a place to put the fungus where the mosquitoes will land on it and get infected.”

J.M. Darbro et al., “Effects of Beauveria bassiana on survival, blood-feeding success, and fecundity of Aedes aegypti in laboratory and semi-field conditions,” The American Journal of Tropical Medicine and Hygiene, 86:656-64, 2012.