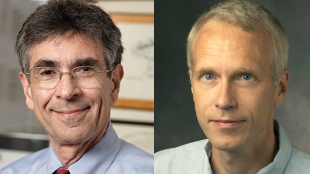 Courtesy of HHMI and StanfordRobert J. Lefkowitz of Duke University and Brian K. Kobilka of Stanford have won this year’s Nobel Prize for Chemistry for describing the structure and function of the receptors through which cells sense and respond to chemical signals. The findings, awarded the prize this morning (October 10) by the Nobel Assembly at the Karolinska Institute in Stockholm, have transformed scientists’ understanding of many physiological processes and continue to support advances in drug design.

“They have helped us to develop deeper insights in to the mechanisms of cell reactions and the molecular structures behind them—insights that help us to understand the beautiful complexity of the chemical world inside us,” Bassam Shakhashiri, president of the American Chemical Society, told The Scientist. “Their contributions are extremely useful. Every day thousands of chemists use the results of their research in developing new pharmaceuticals for use in society.”

Taking on the problem in the late 1960s, Lefkowitz set about trying to isolate receptors from cell membranes. He attached iodine isotopes to various hormones to track their paths through cells in the lab. His experiments revealed several cell surface receptors, including the β2-adrenergic receptor, which responds to adrenaline to regulate the body’s fight-or-flight response. Then, in 1982, his team was able to remove one of these receptors, using detergents to dissolve it from the cell membrane, then purifying it with chromatography, which allowed them to study it in more detail.

Around the same time, Kobilka joined Lefkowitz’s lab and was tasked with isolating and determining the sequence of the gene that codes for the β2-adrenergic receptor. Kobilka built a library of genomic sequences and screened it with the few fragments of sequences they had for their receptor, piecing together the full sequence. The researchers then used the sequence to recreate the receptor’s structure, and found it to be similar to rhodopsin, a light-detecting receptor in the eye. Their work was published in Nature in 1986.

Lefkowitz and Kobilka realized that the β2-adrenergic receptor was just one of many receptors that make up the family now known as G-protein-coupled receptors (GPCR). Around a thousand GPCRs are now known to exist in the human body, where they play key roles in virtually every physiological process, including smell, taste, and the regulation of heart rate and pain tolerance.

Lefkowitz and Kobilka have since published studies in Nature and Science, among other high-ranking journals, in which they visualize the structure of GPCRs in high-resolution and detail their function. In 2011, in another paper in Nature, Kobilka captured the moment at which the receptor is activated by a hormone and sends a signal to the cell.

Such insights have already been critical to drug discovery: around half of all drugs currently available achieve their effects by targeting these receptors. In future, further characterization of these crucial molecular machines should help drug designers come up with even more effective treatments.

“G-protein coupled receptors have for a long time been the holy grail of membrane protein research,” Mark Sansom, a molecular biophysicist at Oxford University, told the Science Media Centre in London, UK, as reported in The Guardian. “They are fundamental to regulation of many physiological processes, from the nervous system to taste and smell. They are also a major class of drug target and are incredibly important to the pharmaceutical industry.”

Shakhashiri added that awarding the Chemistry Nobel to work with such a biological emphasis is a testament to the reach of chemistry. “Chemistry permeates all the sciences,” he said. “It is so successful that it has broken down traditional barriers in science; so successful, even, that it is at some risk of losing its own identity. That is a tribute to how we have developed insights into the role of chemicals at the molecular level in the body.”