Researchers have long believed that autism spectrum disorder is caused by some sort of imbalance between excitation and inhibition in the brain. In particular, studies have suggested that something is unusual about signaling controlled by the inhibitory neurotransmitter, γ-aminobutyric acid (GABA), whether it be lower levels of GABA or the receptor it binds to.

But a study published last week (October 3) in Science Translational Medicine, which zeroed in on GABA receptor levels, finds no evidence that their abundance is any different between people with autism and people without.

“We were unable to identify that individuals with autism had differences in GABAA receptor binding,” says Declan Murphy, a psychiatrist who studies brain development and neuropsychiatric disorders at King’s College London, who co-led the work with the Karolinska Institute’s Jacqueline Borg. “That’s important because it had previously been reported that they do have abnormalities in GABAA receptor binding, number one, and number two, it’s important because GABAA is a target of a number of pharmaceutical companies in terms of developing new treatments,” Murphy adds.

GABAA is the most common form of the neurotransmitter in human brains, and since the early 2000s, reports have been piling up that associate deficits in the production of GABA or in GABA receptors to autism. For instance, studies in postmortem brains of people who had autism spectrum disorder (ASD) and of neurotypical subjects, led by Gene Blatt, a neuroscientist at the Hussman Institute for Autism in Baltimore, had found that people who had ASD had lower levels of the enzyme that makes GABA. Blatt’s investigations also found that people with ASD had lower GABAA receptor levels in the cingulate cortex and hippocampus. And an in vivo study by another group had detected reduced GABAA levels in the brains of children with ASD.

There’s a difference in the function of the system, the GABA system, but it’s not associated with the difference in GABAA receptor number.

Additionally, in a 2013 pilot study of three men with ASD, the authors of the latest work found a decrease, compared to neurotypical participants, in a GABAA receptor subunit (one of the proteins that come together to form the GABA receptor) using positron emission tomography (PET). So they decided to repeat the experiment on a larger scale.

In both people and mice they found no differences in receptor density among the subjects.

Murphy and his colleagues say the difference between their study and some of the others is the presence of potentially confounding factors. In Blatt’s investigations, they note in their report, patients had taken medications, such as anticonvulsants. And the study on children included kids with epilepsy and intellectual disability, along with some participants who were taking anticonvulsants.

The authors suggest that the discrepancy between the results of their pilot study and the present one may be due to chance given the small sample size of the former.

Yehezkel Ben-Ari, CEO of the French pharmaceutical company Neurochlore and head of the Ben-Ari Foundation of Neuroarcheology (IBEN), does not believe that GABA receptor levels, in themselves, matter much in terms of ASD symptoms. That’s because the receptors are just one of many qualities—such as receptor location, GABA levels, and GABA’s interactions with the receptor—that influence the neurotransmitter’s inhibition of neurons. “The density of GABA receptors is a very small factor in all these factors,” says Ben-Ari. “You can have a high density of GABA receptors and nothing happens,” as far as neural inhibition goes.

Although the GABA receptors seemed normal, the researchers nevertheless wanted to test the participants’ overall GABAergic functioning, or how well the entire GABA inhibition system, which includes factors other than the receptor itself, works. To do that, the researchers used the paradoxical-motion perception test (PMP), which assesses the ability to follow motion on a high-contrast background. It tests GABA function because in the visual cortex, the neurons that detect contrast also inhibit those that detect motion, via GABA, such that when GABA systems are working properly, it’s harder to detect motion on a high-contrast background. People with reduced GABA signaling, therefore, tend to perform better at this task.

It turned out that people with ASD performed better on the test, suggesting that their GABA function was indeed impaired—just not through abnormalities in receptor density.

That is the question, Murphy says, driving future experiments. 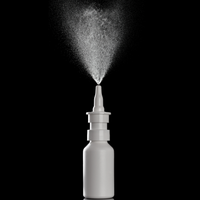