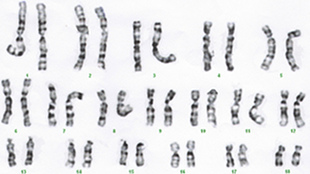 FLICKR, CAN HUsing a novel approach, researchers have discovered a genetic variant that may contribute to the muscle pain and weakness experienced by some statin users, according to a study published in Nature today (August 28). Under statin-treated conditions, the variant affects expression of the gene for glycine amidinotransferase (GATM), which controls the synthesis rate of creatine, a molecule muscles use for energy.

“The authors used a really unique approach for trying to understand why some people might respond differently [to statins],” said Deepak Voora, a physician-scientist studying pharmacogenetics at Duke University, who was not involved in the research. “That approach will have implications for studying other drugs.”

To find relevant genetic variants, the researchers collected lymphoblastoid cells from patients participating in a trial testing simvastatin, also known as Zocor. Statins generally act in the liver, but the researchers noted that lymphoblastoids—immortalized immune cells that are easily generated...

“The notion of using lymphoblastoid cell lines to understand drug effects is very interesting,” said Dan Roden, a pharmacogeneticist at Vanderbilt University who was not involved in the study. “It’s a very, very interesting way of finding new signals.”

The researchers treated the cells with statins and, examining expression quantitative trait loci (eQTLs), looked not only for genes whose expression the drug affected, but whose changes in expression suggested variation among all of the cell lines’ drug responses.

They eventually focused on the gene for GATM, which showed promise because it encodes an enzyme that limits the rate of creatine synthesis. “Creatine is a major source of energy for skeletal muscle,” said Voora. “It makes sense that something that alters the level of creatine within the muscle might predispose the individual to muscular side effects.”

Indeed, when the researchers analyzed the link between the GATM expression-related variant and whether patients in other clinical trials experienced muscle problems, or statin-induced myopathy, they found the association was significant.

“We found there is this genotype that both affected GATM expression response and also affected predisposition to myopathy,” said Lara Mangravite, director of systems biology at Sage Bionetworks in Seattle and lead author of the study.

Previously, researchers had looked for genetic variants associated with statin response using traditional genome-wide association studies (GWAS) comparing single nucleotide polymorphisms (SNPs) between patients with and without statin-induced muscle problems. The GWAS approach yielded one important set of variants of the gene SLCO1B1, which helps control the rate of statin uptake in the liver.

While some patients are now screened for SLCO1B1 variants to help predict their response to statins, Mangravite does not envision a similar scan for GATM. “I don’t think this is going to turn into a clinical biomarker test,” she said. “I don’t think that the effects are of the magnitude that would cause that.” Rather, she noted, the gene could help scientists elucidate how statins can cause myopathy, and understand how to create treatments that avoid similar adverse effects.

To further understand the function of GATM, the researchers knocked its expression down in liver cells, finding that it altered their response to cholesterol depletion. “There is interplay with cholesterol metabolism and muscle metabolism,” said Mangravite. “We don’t know what that mechanism is.”

Moreover, Mangravite pointed out that GATM’s effects on myopathy have yet not been fully explained. Roden called the possibility that GATM variation leads to myopathy a “very appealing hypothesis that probably needs more work.”

“They used these cell lines and an extensive survey of eQTLs after exposure to come up with a plausible gene for mediating statin effects,” he said.

“If other people find the same gene, that will be the true test of these findings,” added Voora.