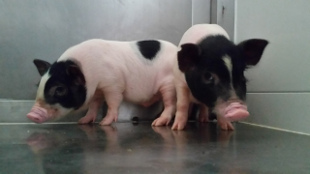 Update (July 6, 2017): BGI has dropped its plans to sell the pigs, according to MIT Technology Review. “Exactly why the plan got scrapped remains murky,” Tech Review states. “But distracting press coverage, negative public sentiment in China around GMOs, and uncertainty over how China plans to regulate gene-modified animals all seem to have played a role.”

In 2014, China’s BGI reported the creation of genetically-engineered Bama pigs that grow to be 15 kilograms, or 33 pounds. Last week (September 23), at the Shenzhen International Biotech Leaders Summit in China, the company announced plans to sell these “micro-pigs” as pets for approximately $1,600 each.

Originally, the micro-pigs were crafted for use in research labs. Pigs are more similar to humans than rats and mice are, making them better candidates for drug development tests and other projects eventually intended for human clinical trials. However, keeping a full-size adult...

The micro-pigs have since been used in studies of stem cells and the gut microbiome, Yong Li, technical director of BGI’s animal-science platform, told Nature. The company’s latest pet-selling venture is intended to fund research on gene-editing regulation, Nature reported—and BGI was turning heads at the Shenzhen summit with their pigs. “We had a bigger crowd than anyone,” Lars Bolund, a medical geneticist from Aarhus University in Denmark who helped BGI develop the pig gene-editing program, told Nature. “People were attached to them. Everyone wanted to hold them.”

But researchers elsewhere remain cautious about the endeavor and the ethical questions it might raise. “I just hope we establish a regulatory framework—guidelines for the safe and ethical use of this technology—that allows the potential to be realized,” Daniel Voytas, a geneticist at the University of Minnesota, told Nature.  “I worry that pet mini-pigs distract and add confusion to efforts to achieve this goal.”